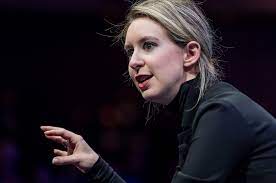 Bright red lipstick was exchanged for a green mask. Black slacks and a Steve-Jobs style black turtleneck was replaced with a banal pantsuit. A tight bun swapped for less intimidating, free flowing locks. And the woman who claimed that she needed no one, who said that she only relied on herself for success, the woman who graciously accepted the title of “genius,” suddenly became someone very different. Someone more timid, who refused to accept blame or responsibility, who refuted the success of something she had worked her life to achieve.

Such was the scene inside the San Jose courtroom where the fate of Elizabeth Holmes was decided. But, as Holmes soon found out, one’s fate cannot be altered with a few different sartorial choices and temporary behavioral changes. On January 4th, Elizabeth Holmes, founder of the blood-analysis company Theranos, was convicted on 4 counts of defrauding her investors, facing a maximum of 20 years in jail for each count.

With her intimidatingly deep voice and intimations of dominating the world’s technology industry, it’s been hard to ignore the monolith that is Elizabeth Holmes. But for many Americans, she is just another Silicon Valley billionaire. And they’re not wrong. Holmes is the creator of the now defunct health-technology corporation Theranos, whose technology, she claimed, was able to scan just a drop of a person’s blood and run thousands of tests for diseases. Though the technology would have changed the face of modern healthcare, what really attracted people to Theranos was Holmes herself. She started the corporation while in college at Stanford, when she was 19 years old, and soon became the world’s youngest female self-made billionaire. Though she refused time and time again to explain her developing technology, she stunned the world with claims of its power. She got extraordinary people to sit on Theranos’ board, like George Shultz, Secretary of State for former President Ronald Reagan, and Henry Kissinger, Secretary of State under Richard Nixon and Gerald Ford: both political forces of nature. The company was an example of what it meant to revolutionize the world with simple technology, so simple it could barely be believed. Theranos even projected $990 million in revenue in 2015. That true number, as many significant investors found out later, was much closer to $0 than Holmes wanted to admit. As it turned out, Holmes was merely a microcosm of the innately Silicon-Valley tendency to cover up ineptitude and fraud with a veneer of charisma: not the first of her kind, and certainly not the last.

It came as an absolute shock to the world that Theranos’ technology wasn’t only ineffective: it was nonexistent. The shroud of secrecy that had covered Theranos for so long was dropped in 2015, revealing a staff that had more advertising than medical employees. Staff members who were prohibited from communicating with one another about their work. And most importantly, the world of panic that Holmes concealed beneath her Steve Jobs-esque confidence and superiority. And just like that, Walgreens pulled out of their deal with Holmes, the FDA banned the use of one of her blood-testing devices, and the Centers for Medicare and Medicaid Services prohibited Holmes from operating a medical laboratory. But this was only after years and years of Holmes touting claims of technological brilliance, pretending to diagnose cancer patients, and establishing a Theranos dominion within Silicon Valley. What protected Holmes from being found out sooner? In a sense, it was her bright red lipstick, her Steve Jobs turtleneck, her tight bun, and her iron-clad confidence.

Holmes almost had too much going for her. She was born into wealth, her father being the vice president of Enron (a company that, ironically, was embroiled in its own fraudulent scandals). She attended the Ivy League of the West, Stanford, and seemed to prove her intelligence by dropping out in order to pursue her own business when she wasn’t even 20. Analysts of her life later on would point to a note she wrote to her father when she was nine years old as an indication of her later success. She wrote “[w]hat I really want out of life is to discover something new, something that mankind didn’t know was possible to do.” This incredible self-confidence, this hunger for knowledge and, though she did not say it explicitly, success, would lead Elizabeth Holmes to the mountaintop of human achievement. She had charisma, intelligence, a family history of wealth and success. And yet, all of these things just slowed her inevitable fall.

This is, unfortunately, not the only story of a charisma-driven Silicon Valley nightmare. Adam Neumann was the founder of WeWork, a company valued at $47 million as of 2019, that sold shared-office space and soon became the largest commercial tenant in Manhattan. Neumann’s aesthetic and personality could not be more different than Holmes’: where she is reserved, he’s flashy. He preferred a leather jacket to her turtleneck, and where Holmes was famous for her green juice, he was famous for his tequila. However, they both possess a singularly important trait: charisma. A charisma that excused his over-expenditures, his overinvestments, and his almost despotic control over company shares. A charisma that caused employees to call WeWork’s environment not “productive” or “supportive” but “cult-like.” Just like with Elizabeth Holmes’ blood analyzing technology, the world chose to trust the face behind the product, and not question the viability of the product itself. After a botched attempt to make the company public, investors began scrutinizing the amount of money that Neuuman was pouring into a yet unproven business model. Neumann stepped down from the board of WeWork in 2019 as the company’s heir, and undoing. His refusal to admit the faultiness of his business practices was similar to Holme’s secrecy about Theranos machinery. Though both of their companies were failing long before the public knew about it, they managed to hide it under their own self-confidence. This practice continues to be exercised by technology and software giants like Elon Musk and Mark Zuckerberg, who operate under the label of genius with much immunity (for an only slightly less inimical example, see Musks’ Not-A-Flamethrower). Though Musk and Zuckerberg may not be leading their respective corporations to oblivion, they are both afforded a certain amount of leniency that almost no other public figure is gifted with.

It’s become increasingly apparent that the most valuable currency in modern business ventures are charisma and personality. Holmes, and many of her contemporaries, figured out that if the public trusts the claims you make, they will likely trust the product you sell…even when the product you’re selling might not exist. The Holmes trial is truly a breath of fresh air in this regard— an instance when justice was served and a great titan was brought to her knees. But this begs an important question: is the conviction of Elizabeth Holmes the start of a pattern, or a blip in the system? There are many who argue that this will not change Silicon Valley, because although Holmes was punished, the people who invested and backed Theranos walked away from the incident without a scratch or a dent to their bank accounts. And considering the nature of modern media, Holmes might just be a cautionary tale that future world-changers will ignore, to be buried in the latest scandals of opportunism and corruption. However, the most important aspect of the Elizabeth Holmes conviction is that it sets a precedent. A precedent that the public has a right to know what they put their faith in. A precedent that no one can operate outside of the limits of the law. A little something to show that money, power, and most of all, charisma, are not invincible. That might just be a naive daydream. But it also might be the way of the future.