The Beatles: The Rise and Fall of a Global Phenomenon 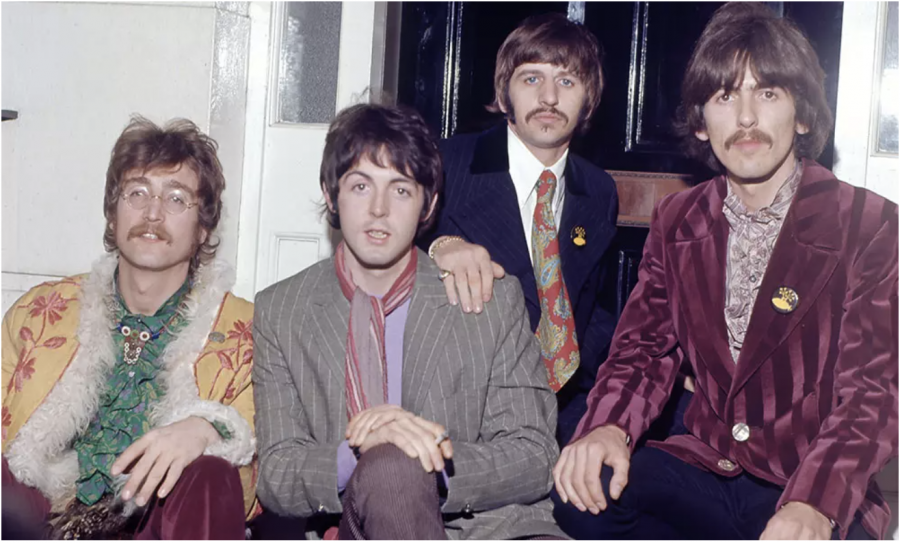 There’s no doubt in my mind that everyone at one point or another has heard a song by The Beatles. I can’t remember the first time I heard one, but I wouldn’t be surprised if it were a day after I was born. Unlike most kids my age, I was exposed to music much older than a few years before my time. This was all thanks to my grandpa, who basically lives and breathes The Beatles. While most kids had SpongeBob and Henry Danger, I was being hypnotized by the acid-trip-inspired colors of The Yellow Submarine. It was 2009 and I was growing up in the 60s. As a 15-year-old who can name every Beatles song, and the album they appear on, I think I can say for sure that this had some major effect on me. But only recently, I’ve noticed how truly influential The Beatles were on modern music and even daily life.

This past November, Disney released Get Back, a Beatles documentary directed by Peter Jackson, the legendary director known for The Hobbit and The Lord of the Rings. The documentary consists of six hours of footage of The Beatles working on their final album, Let it Be, right as the band was on the brink of collapse. Throughout Get Back, the viewer gets to witness the absolute genius and talent of the band and discover some deeper perspective of the band members’ relationships with one another. The documentary touches on everything from the very beginning of the band to the sensitive topic of Yoko Ono, wife of John Lennon who is often blamed for the band’s demise.

In a small town in Liverpool, four teenage boys who would change the face of music and life as we know it, were all strangers to one another. Until one fateful day in 1957, when a 16-year-old John Lennon was introduced to a 15-year-old Paul McCartney. At the time, according to Biography , young Lennon was part of a small “skiffle” (folk band) called the Quarrymen, which would take gigs at a local church. Another member of the Quarrymen had his classmate, young McCartney, perform with them one night. Not too long after that, McCartney received a more permanent position in the band.

For McCartney’s first official performance with the band, he was given a guitar solo on the song “Guitar Boogie.” Everything was going smoothly, but when the solo arrived, McCartney, as he says in the Anthology Documentary, got “sticky fingers,” meaning he had trouble playing properly. This raised an obvious issue, and McCartney knew the solution.

A scrawny 15-year-old Elvis fan with a guitar obsession named George Harrison was a close friend and classmate of McCartney. McCartney told the band that despite Harrrison’s young age, he was a naturally gifted guitarist. The rest of the Quarrymen trusted McCartney, and after watching Harrison play once, he became their lead guitarist. The only position left was a drummer.

The Quarrymen could not keep a drummer for very long. They went through at least a dozen before they came across a drummer whom they believed would become a permanent member. This drummer was (drum roll, please)… Pete Best. That’s right, Best was the official drummer of the Quarrymen, who then became known as The Beatles. It was not until 1962, after The Beatles had already begun their rise to fame, that Best would be fired. Their manager, Brian Epstein, would bring in a new drummer. Richard Starkey, soon to be known as Ringo Starr.

In the next three years, The Beatles would grow to be the most influential band ever known. Until 1965, when a series of major events and changes within the band would only break them apart from that year forward.

Not so Magical Mystery Tour

After the release of their first album, “Please, Please Me,” The Beatles became a sociocultural phenomenon. Every album they released became a bestseller. Hundreds of thousands of people would fly in from all over the world just to be in the same city as the band. Swarms of adoring fans would crowd around their hotels, hoping to catch a glimpse of them. People would even show up at airports just to see them get off the plane. Venues became larger as tickets sold out quicker.

Unfortunately, this raised major concerns for the band. They could barely hear themselves play. According to Medium, crowds were incredibly rowdy and vocal, which made it difficult for the band to perform.

As their popularity and audience grew, so did their need for security. The Beatles were beginning to feel uneasy when it came to their personal safety, as well as the safety of their fans. Because of how large the crowds were, people would often be trampled or receive minor to serious injuries.

On August 29, 1966, The Beatles performed live for the last time in Candlestick Park, San Francisco, marking the end of what Rolling Stone referred to as “a disastrous tour.”

Isn’t it a Pity

In 1965, George Harrison began losing his faith in The Beatles after he decided to stop using acid. He later told Rolling Stone, “It’s all well and good being popular and being in demand, but, you know, it’s ridiculous. I realized this is serious stuff [his mental health and safety], this is my life being affected by all these people shouting.” Harrison no longer felt that the band would sustain him.

To top this off, McCartney and Harrison shared a somewhat abusive relationship.

Get Back exhibits countless occasions when McCartney would harshly dismiss Harrison’s ideas while in the studio. McCartney constantly patronized Harrison, treating him like an inferior member.

Not only was McCartney excessively rude to Harrison, but the documentary reveals how truly controlling he was over the rest of the band. McCartney’s sudden hostility may have had to do with the sudden death of their manager, Brian Epstein.

In 1967, Epstein accidentally overdosed due to barbiturates and alcohol intoxication. This left the band without management. Overwhelmed with shock and grief, The Beatles had decided to manage themselves. Though they were still able to produce content, they lacked structure and motivation. Without Epstein, the band was slowly tearing itself apart. Get Back reveals how McCartney takes the manager role upon himself, condescending his band mates.

In the 1st episode of Get Back, Harrison decided enough was enough. During their practice, he told their producer, George Martin, that he was leaving the band and proceeded to go home. This leaves the band in doubt.

Over the weekend, the band had a meeting with Harrison, and it did not go well.

The first band member to show up for their next practice was Ringo Starr, saying “they all sort of fell apart in the end.”

The band had considered bringing in Eric Clapton, a close friend of Harrison, who is considered to be one of the greatest rock guitarists of all time. Harrison’s first wife, Patty Boyd, would later leave him for Clapton.

Yoko Ono, who married John Lennon in 1969, is often blamed for splitting up the Beatles. In reality, the band was already on their last few threads.

Throughout Get Back, both Lennon and George Harrison expressed their doubt in the survival of the band. Both took issue with Paul McCartney’s treatment of their fellow band members. Ono was merely a small detail that may have just pushed the band past their limits.

Ono was the first of The Beatles’ girlfriends or wives that were granted access into their recording studio. As the years went by, Lennon and Ono only became closer. They were practically inseparable.

In the documentary McCartney and Starr discuss how they believe Ono was speaking for Lennon instead of him making his own decisions. They blame her for being the reason they didn’t get along as well anymore, as if she in a way disturbed their writing process. Before Ono, the four Beatles were always together. They were living together, traveling from hotel room to hotel room, so they were able to write as soon as they woke up. When Ono came in, Lennon spent less time with the rest of the band. McCartney claimed that when the band was no longer spending as much time together, that’s when they began to fall apart.

On April 10, 1970, Paul McCartney officially announced that The Beatles had broken up.

Each Beatle went their separate ways.

George Harrison went on to release many solo albums. Most famously, All Things Must Pass and Cloud Nine. Harrison was suffering from a sort of post-traumatic stress disorder from his time in the band. “If you had 2 million people screaming at you, I think it would take a long time to stop hearing that in your head,” says Olivia Harrison, who married him in 1978. In 1997, Harrison was diagnosed with lung cancer and had to undergo radiation therapy. Two years later, Harrison was stabbed in the lung by a deranged man at Friar park. The injuries only made it harder for him to battle the cancer. The disease had spread to his brain and he no longer had the strength to continue fighting it. On November 29, 2001, George Harrison passed away. Twenty years later, he is still known as one of the world’s greatest guitar players of all time.

John Lennon released several solo albums such as Imagine, Gimme Some Truth, and Double Fantasy. He also released multiple songs and an album with Yoko Ono’s Plastic Ono Band. Lennon sang for peace, using his fame to spread positivity and awareness. He wanted his music to create positive change in the world, spreading the message “All you Need is Love.” He most famously did so in his song “Imagine,” in which he sings of a world in which people are not separated by their beliefs. On December 8, 1980, John Lennon was standing outside his apartment building in Manhattan when a mentally unstable fan named Mark David Chapman shot and killed him. Lennon’s death was a worldwide tragedy. To this day, millions mourn his untimely death and carry on his message of peace and love.

Paul McCartney came out with dozens of solo albums including Band on the Run and Tug of War. McCartney started a band called Wings. His song “Live and Let Die” was famously recreated by rock band Guns N’ Roses in 1991. He is still touring to this day. McCartney recently released a memoir titled “The lyrics” which has become a best seller.His daughter, Stella McCartney, made a name for herself as a designer known for her sustainable clothing.

McCartney remains extremely successful to this day as a music icon. He helped produce the Get Back documentary along with Ringo Starr. McCartney is still an inspiration to music lovers around the world.

It was extremely difficult for Ringo Starr to leave The Beatles, as he was in denial of the band’s  near collapse. In the documentary, Starr has trouble believing that the band is truly splitting up. Starr went on to create albums such as Ringo the 4th and Bad Boy. His most popular solo song was “It Don’t Come Easy.” Starr’s most recent album was released in 2019, entitled What’s My Name. Starr alongside McCartney produced the Get Back documentary. The world still sees Ringo Starr as one of the greatest drummers who ever lived.

The inevitable end of The Beatles left the world heartbroken. As sad as it was, Get Back reminds fans to never forget the impact The Beatles had on our lives and on music, and to always remember that all you need is love.