Making the Grade: How New Policies Are Affecting Students’ Stress at Milken 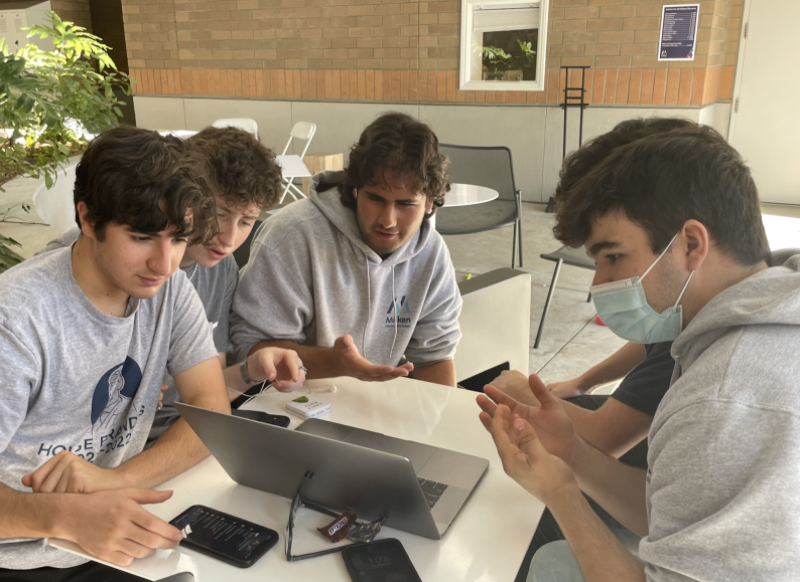 “I’m mentally done with school and it’s only 10:47 in the morning,” said a Milken junior who chooses to remain anonymous. C block may be over, but the student’s workload continues to pile up throughout the day.

With the first semester of the 2021-2022 school year nearly over, students’ stress levels have definitely increased. On top of their busy schedules and rigorous classes, students also have to take into account the recent policy changes that affect grading, testing, and late work. Along with making the full transfer to in-person learning this year, these changes have affected students’ overall stress levels, with some of these adjustments being beneficial to their mental health, and others adding to the pressure to do well academically.

Last school year, Milken launched its movement toward grading reform, which “focuses more on students achieving specific standards versus broader content knowledge,” explained Mr. Kiley, the Division 9/10 Learning Specialist. Centered around the idea of standards-based grading, “the ultimate goal is for students to leave a particular class with that particular body of knowledge.”

The standards-based grading system, adopted by many other California schools in recent years, breaks down academic material into specific learning targets and aims to measure a students’ understanding of these learning objectives. Grades are based on a students’ comprehension of the material, rather than non-academic factors such as class behavior and participation. Unlike traditional grading methods, the concept of standards-based grading focuses on all students achieving mastery in their learning targets, rather than failing a concept and then moving on from it.

In describing the reasoning behind this change, Mr. Lindsay, the 11/12 Division Head, explained the various issues and potential biases in the traditional grading system. In previous years, for example, Milken included a participation category as part of a students’ overall grade. “Is that always assessing a students’ ability to know the content of a class,” Lindsay asked. “What if a student is introverted?” By eliminating these behavioral factors, the goal is to recenter grades on whether or not a student understands the material learned in class.

As a result of this system, students’ overall grades at Milken are split into two categories: assessment and practice, with the assessment category weighing roughly 85% of the grade and practice assignments taking up around 15%, depending on the department. As part of this system, practice assignments are graded solely on completion as opposed to accuracy.

“When you open your grade book, it should be very clear to you how your grade is calculated,” Mr. Lindsay explained. “Grades should be transparent.” By simplifying the grade book into just two categories, it provides clarity as to what areas students are excelling in, and which ones should be improved.

This system goes hand-in-hand with the assessment calendar which was originally implemented last school year but has since been modified in response to various student and teacher feedback. With this calendar, departments are split into alternating weeks in which they are given an opportunity to assess students on a two-week rotation. With a system that is more focused on assessing for skill mastery, students’ grades are heavily impacted by how well they perform on their assessments, and less focused on class participation and practice work.

“We are not averse to making a new iteration of the testing calendar if it is necessary,” Mr. Lindsay explained. Given that this calendar is relatively new, he explained, “We are still taking feedback from teachers and students to see if we can get to a better place with the calendar.”

In response to this new policy, students typically recognize that it has increased the intensity of their classes. “It’s become more stressful,” Sasha Banafshaha ‘22 stated. “For someone like me who isn’t the greatest test-taker, if I mess up on one test, it’s going to affect my whole grade.” The pressure to perform well on tests is heightened because it has such a large impact on students’ overall grades.

Other students feel that the structure of the testing calendar leads to an unbalanced workload. “I’ll be really stressed one week but then the next week if I have no tests, I am completely devoid of stress,” Seth Cohen ‘23 stated. Along with this, it can prompt teachers to give more assessments, as they are confined to the specific weeks that they are allowed to give tests. “The testing doesn’t line up with the pace of the curriculum and leads to tests being more clumped together, which is the opposite of their goal,” Cohen explained.

Responding directly to this concern, Ms. Farkas, the academic support director for division 11/12 explained, “The testing calendar was made with good intentions. We wanted to make sure that there are not many tests in one week,” When asked about students’ stress towards testing, Ms. Farkas explained that she “hope[s] the calendar evens out, students feel less overwhelmed, and everyone reaches out for support when they need it.”

To combat potential stress from the weight of the new assessment policies, Milken implemented a new reassessment system that allows for a specific two-week period in which reassessment can occur after a student has received a graded test back. If a student receives below an 80% on an assessment, they are given two opportunities to reassess and earn up to an 80% on the test. Along with this, students must meet a certain amount of criteria before being given the opportunity to reassess, which includes attending lishma or completing practice assignments, depending on the department.

Last year, students could only receive up to a 73% on their retakes, prompting many students to not even attempt to reassess as they felt it would barely benefit their grades. When explaining the reasoning behind making this percentage higher, Kiley said that reassessment should be a “positive and academically profitable experience.” If students are able to earn up to 80%, they will be more likely to want to reassess, as they will be more satisfied with their overall grade.

Generally, students are satisfied with the new reassessment policy as it takes away some of the pressure to perform well on all assessments. “I think the reassessment policy has been overall very beneficial as it reduces a lot of our stress and eliminates that one-off test where we don’t do as well as the others,” one anonymous junior explained.

On the other hand, some students feel that the reassessment policy is too lenient. By making retakes consistently available, students are able to procrastinate learning new material when it is first being taught, and instead, fall back on the ability to reassess. “These systems allow students to have those sorts of routines, making students’ work habits worse,” Spencer Davis ‘23 stated. If a student feels they may not succeed on an assessment, they may not be prompted to even attempt to score well, and instead become reliant on their ability to retake the assessment.

This year, Milken implemented a more clearly defined late-work policy that gives students the ability to turn in practice work up to a week after the due date without getting points taken off. If the assignment has not been submitted after one week, students will receive a 50% on that assignment.

Despite many of these changes only being implemented within the past year, these policies and ideas have been in the works for around four years. Milken is not alone when it comes to adopting many of these practices, and is part of a nationwide move toward grading reform. As time goes on, it will be more and more apparent whether or not these changes ease students’ stress levels and improve their learning and well-being.