Back in Black, Grey, and Blue: Students’ Reactions to Milken’s New Dress Standard 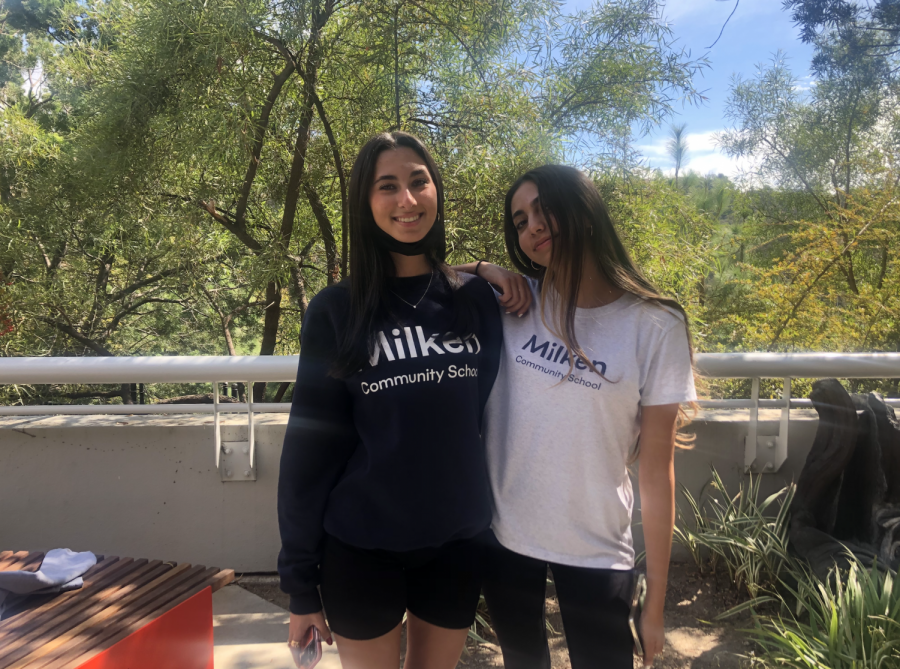 “High school is the most transformative time in your life and it can be difficult to come to terms with who you are when your outlets of expression are restricted,” Kate Behrman ‘23 said. For many teenagers, the way that they dress plays a pivotal role in the way that they present themselves. Whether it’s by following the latest trends or by branching out and exploring creative new looks, the clothes that you wear can have an impact on the way you are perceived.

As Milken students immerse themselves in the 2021-2022 school year, they’re faced with the challenge of acclimating to their new classes in a school year fully in person. However, students are also faced with an unfamiliar change: the Milken Merch Dress Standard. The mandatory dress code includes a shirt and sweatshirt from the Milken Merch line accompanied by a choice of solid-colored bottoms from the student. The Milken Merch line includes a variety of shirts that gravitate toward neutral colors of navy, grey, and white, conforming to Milken’s new brand identity and colors. As students have gotten used to the dress standard over the past couple of months, their opinions regarding the change have solidified.

Getting ready in the mornings, students generally agree that they’re moving more quickly and spending less time picking out their outfits. “I think that it makes it easier to get ready in the morning,” Miriam Herstein ‘23 said. Rather than spending time choosing from their entire wardrobe, students are able to choose from just a few limited options.

On the other hand, one student who prefers to remain anonymous thinks that it takes even longer to decide what to wear. “It forces me to take more time in the mornings to get to the same fashion standard that I was at previously,” the student said. “It feels like an extra step.”

Many students say that they’re frustrated by the lack of self-expression they can exercise with the Milken Merch. With the limited options available on the Milken Merch website, it can be difficult to find ways to outwardly express yourself. “The clothing doesn’t represent any personality,” one anonymous student said. “We shouldn’t make this school a copy-paste place.”

While students are generally wearing the same few shirts, others have begun to spice up their outfits. As students begin to find creative ways to style their Milken Merch, others begin to scrutinize themselves for their lack of invention. “I’m not creative enough for that,” Kate Behrman ‘23 said. “It’s easy to compare yourself to others when you’re all wearing the same thing.” She says that she feels less confident in the Milken Merch than she does in her own clothes. “I think that uniforms spark a lot of insecurity.”

Other students echoed this sentiment, speaking about the way that the clothing fits. “The shirts are not tailored to every single body type,” Nicole Diner ‘23 said.

“The clothes do not fit well and are generally unflattering,” Odelia Segev ‘23 said.

While some dislike the fit, others love how comfortable it is. “The Milken Merch is pretty soft,” Shawn Salma-Torban ‘23 said. Upon their first time wearing it, many students were enamored by how comfortable the shirts were.

Recently, Tal Barak ‘96 Milken’s Director of Communications and Public Relations, reached out to students via email to reiterate that the Milken Merch is still a work-in-progress, and they’re constantly adding new items to the store. She encouraged students to reach out and provide feedback via this form, and mentioned that clubs can reach out to create their own spiritwear.