The Milken Community: Life in Quarantine 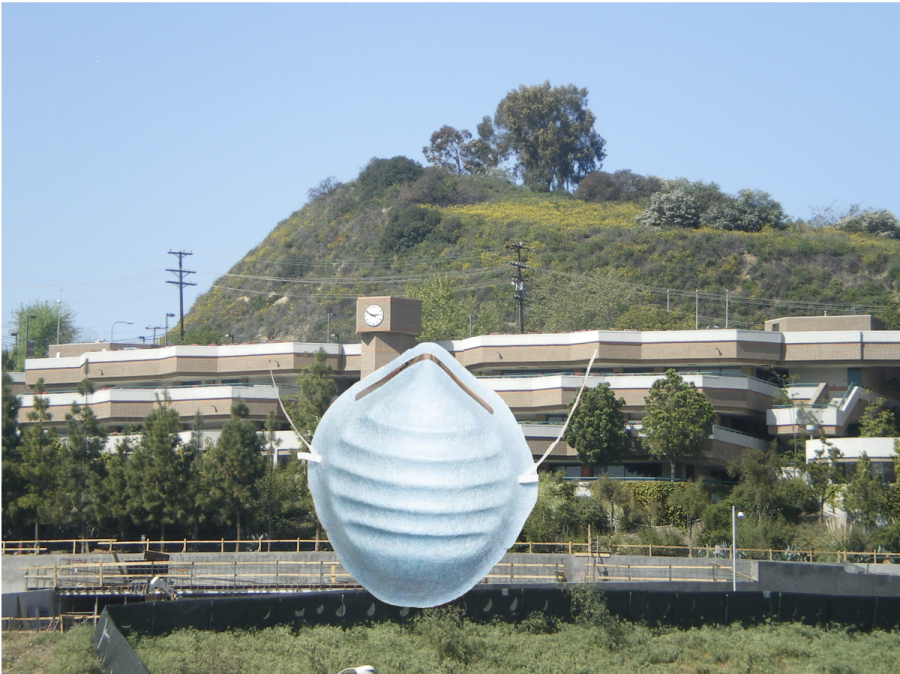 By: The Roar Editorial Staff

“My mom came home from a three-week trip, but I could not interact with her,” said Max Banton ‘22, whose mother had to end her excursion to South Africa abruptly to get back to the US before President Trump placed any more travel bans. “As soon as Trump announced the European travel ban, I freaked out and called my mom to come home right away,” he told The Roar.

Due to the Coronavirus outbreak in the United States, many educational institutions have shut down their campuses in order to minimize contact. Milken Community Schools followed the larger movement of the country and the state of California, closing on March 12 and canceling all “community events, athletic events, performances, and parent education,” according to a March 11 email from Head of School Dr. Sarah Shulkind.

On March 15, the school sent out an additional email, announcing the launch of virtual school starting the following day. At first, the school announced that online school would continue for at least the next two weeks. When that had passed, they informed the community that classes would continue until school opens again. Mr. Lindsay and Dr. Schwartz emailed the Senior class with the following update: “School is currently scheduled to resume on Monday, April 20 during what was formerly Tiyulim week(s). Of course, we will update you should anything change.” In addition to campus being closed, Milken’s Tiferet fellowship was shut down for the year, with the students flying home from Israel and beginning online classes with the rest of the student body.

Ellie Schiff, a Milken senior, was just beginning her run of the school musical, Fiddler on the Roof, when it was canceled due to COVID-19. This decision, although merited, was devastating for the cast, who had spent months rehearsing for the show. “It’s awful. Musicals have absolutely been the highlight of my high school career,” she told The Roar. “Fiddler on the Roof has been a family to me, and each and every cast member worked incredibly hard to create probably the best show I’ve been in at Milken. We were all so proud of this show and so excited to bring it to life for an audience. It’s really sad that we didn’t get to do that.”

Along with losing the musical, all of the senior events that Ellie has been looking forward to are also in jeopardy, such as March of the Living (which has already been canceled), prom, and graduation. Even with this difficult news, Ellie has found things to be grateful for. “I have all the food I could need, my school, and a family who can afford to work from home.” She and some other seniors in the musical have been in contact with everyone they can reach to try to reschedule the shows. “Everyone is on our side but at this point, it isn’t up to us or the administration.”

Milken senior Jordan Feldman has been contributing to a science research lab for quite some time. One would think that COVID-19 would affect his ability to work on this lab, but he was excited to find out that he’s able to work from home. Although it’s not the same experience as physically being surrounded by scientists in a lab, Jordan’s excited that his hard work won’t be put on hold. Unfortunately, not all of his activities can be done at home. Specifically, Jordan’s orchestra career at Milken sadly came to a premature end due to the Coronavirus. Jordan plays the clarinet and was excited to perform a solo at an orchestra concert, but the concert was canceled and he wasn’t able to debut the solo he’d been working on for weeks. He hopes that the performance will be rescheduled, but the uncertainty of the pandemic doesn’t allow him to be sure that this will be possible. On the bright side, with some of his extracurriculars on hold, he’s had time to play with his dog and spend time with his family. Jordan notes that it’s “a little weird not being able to see people in person” and he can’t wait to actually be with his friends before everyone graduates.

Junior year is commonly regarded as the most challenging year of high school, in large part due to SAT and ACT testing. Last week the College Board announced the postponement of the SAT and ACT due to Coronavirus. Many students have been studying for months and this was their first opportunity to take the test, but now all tests are canceled until June. Aaron Frey (‘21) expressed his view by saying, “It’s frustrating that this test has to be pushed back but I understand the decision with postponing it. “Aaron also spoke about how it is difficult to not be able to take the test, but he recognized that every high school junior in America is going through this in some form.

Aaron Kermani, who was also scheduled to take the March SAT shares that although the news was very upsetting, he realized that he would have more time to study. “So it was kind of a blessing in disguise,” he shares, “But not really.”

Talia Emrani is a sophomore whose Tiferet experience was cut short when the program was ended prematurely. Talia Emrani (‘22) explained that before Tiferet was even canceled, she noticed worried parents and panic among students, which restricted them from experiencing the program to its fullest potential. She described her experience leaving, with a last-minute change that had the entire group leaving Tiferet on a mere six hours notice. In those six hours, they needed to say goodbye to the place that they called home and the madrichim they considered family. Talia worries that this experience was taken away from her group and that they will never get to experience something like this again.

Camden Permaul was also on this year’s shortened Tiferet trip. In Israel, the gravity of the danger of the Coronavirus was extremely sudden. At first, he explained, it felt “like a joke or something that [would] never affect [him], almost how Ebola was.” Even a couple of days before they boarded their flight home, the sophomores on Tiferet would never have imagined that their experience would be cut short. Camden was “devastated” that he had to go home early, and has found readjusting to LA life in quarantine extremely difficult. “I went from the best time of my life filled with all of my friends and amazing teachers learning about the history of my people to being stuck at home with my family doing nothing exciting at all.” Adding to this difficulty was Milken’s decision to add the Tiferet students to virtual classes. This choice has only made it harder to cope with this change. “I had no time to prepare for anything and readjusting feels like something I will never fully accomplish. All in all, you can say that it sucks.”

Noah Weissberg, a freshman at Milken, feels frustrated for his sister and her friends as he knows that they are missing out on their senior year of high school. Noah hasn’t found himself to be greatly affected by this pandemic, but he has gained a greater sense of sympathy for those suffering in his community around him. His positive attitude has kept him from being devastated by the effects the Coronavirus has on his freshman year, specifically his sports career. Even though he’s the captain of the volleyball and his season was cut short, he sports an optimistic outlook, noting that they “have next year” to continue playing the sport they love. On the other hand, the one thing Noah is upset about is that he will never be able to experience the ninth grade wilderness tiyul. Although, he doesn’t let this missed opportunity drag him down because even though he “would’ve liked to go, it is what it is.” We can all learn from Noah’s positive attitude and try to look at the bright side of the situation at hand, no matter how upsetting it may be.

Freshman Tiffany Tavakoli is concerned about what she has heard about the virus. “It’s pretty frightening knowing that it’s airborne and it spreads easily.” “Also, I read that one person can infect 45 people.” Tavakoli has also cited the uncertainty of the situation is also cause for concern. “It’s scary because a lot of people are asymptomatic… Like I could have it and just be asymptomatic” hence why she has decided to stay away from her grandparents. Tiffany feels that the best way to deal with the situation as this time is for everybody to “stay home and isolate themselves so they don’t get sick or make others sick if they have it.”

Milken teachers are also finding their way through these unusual circumstances. Unlike a lot of people, English and Journalism teacher, Mr. Karpel, has maintained an optimistic outlook on the current changes in his life due to the Coronavirus pandemic. Instead of focusing on the setbacks this virus has caused, Mr. Karpel mentions how he is very thankful for his husband, house and cat. In addition, Mr. Karpel mentions how his husband was supposed to be in Japan for six months for work, but is now home safe. Though he has mostly stayed positive, Mr. Karpel does mention some difficulties in terms of being nervous that his husband came back from a foreign country: “We have now spent a week and probably another week wearing masks around each other and wearing gloves when preparing food for one another. We’ve been sitting on opposite sides of the living room when we watch TV, and we don’t share the same bedroom. That is weird, but it seems to be helping us cope.” In terms of online classes, Mr. Karpel is pleasantly surprised how well his classes are running: “It’s a new challenge seeing what is going to work out for people.”

Social Studies Teacher, Mr. Painter, expressed that he is adjusting quite well to the virtual classes. In terms of modifying the curriculum to accommodate the online classes, he says that he now primarily assigns reading and writing assignments, which is “not a big deal” as the subject typically requires such types of assignments anyways.

Mr. Painter likes being able to connect with his students in this new setting: “I miss everyone, so it’s nice to scroll through and see their faces.” This includes finding new ways to lighten the mood like having a “cute puppy contest” at the end of class. In terms of life at home, Mr. Painter and his wife he and his wife are “pretty good at hunkering down and keeping busy.” While he was able to find necessary food and supplies he notes that there are “Still no paper products anywhere” noting peoples’ “interesting but disturbing” hoarding tendencies. He jokes that he thinks he has found a solution in Japanese Bidet toilets, which “clean you without paper.” “Ya, I’m thinking of putting some money in those toilet stocks”, he says.

As English and Personal Finance Teacher, Mr. Steele, has been social distancing and dealing with virtual classes, he has simultaneously been tackling a challenge at home: potty training his twin girls. While he finds having time to “chase naked babies around the house” fun, he has also been exhausted. In terms of virtual classes, Mr. Steele feels that the experience leaves something to be desired as he misses interacting with his students on a daily basis.

Overall, the Milken community is doing its best to adjust to the situation in light of the pandemic. Students and teachers alike are taking necessary precautions to stay healthy and are working hard to remain positive in this tumultuous time.