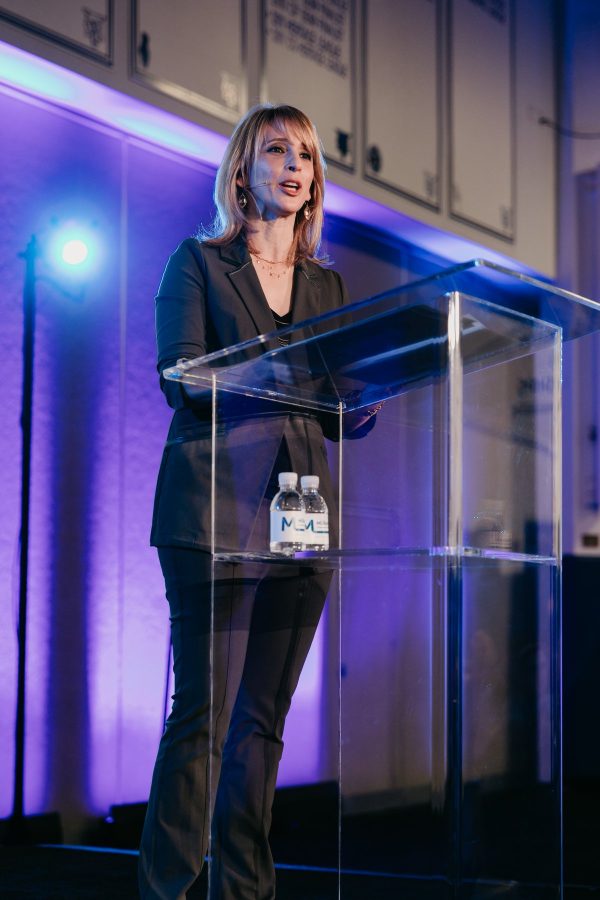 Before Thursday, February 5th, nerves were high as students anticipated the mysterious changes that would be announced by Dr. Sarah Shulkind at Milken’s first State of the School Address. Rumors, like the school turning into Hogwarts-like system, circulated classrooms around Milken. It was expected that the new Head of School would bring a fresh perspective to Milken, yet most were unsure of what that specifically entailed.

The rumors were somewhat quelled when Dr. Shulkind directly addressed the community. Introduced by the Chair of Milken’s Board of Trustees, Lisa Applebaum, it was made clear that these modifications, including structural reorganization and a new house system, came from a collective effort of parents, board members, and Dr. Shulkind herself.

Dr. Shulkind discussed the mission statement of the school, which is essentially to have a school based on Jewish values in order to “educate our children so they surpass us,” as well as how such a mission could be accomplished. An internationally recognized consultant visited campus and evaluated its thematic strengths and weaknesses, which was subsequently used as a basis for new revisions to build community within Milken. Dr. Shulkind elaborated on the reasoning for these changes as well as what they may look like. But, many students remained confused on how such changes will impact them. The Roar sat down with Dr. Shulkind herself to gain further insight into how Milken will and is evolving.

Dr. Shulkind has been receptive to the voices of students, parents, faculty members, and board leaders to discuss what changes were necessary for Milken going forward. Issues have arisen in enrollment and admissions as the target demographic for Milken is shrinking, often due to the inability to afford the school. Dr. Shulkind, however, thinks that obtaining an endowment (a permanent fund in which the interest is used to provide financial aid for students) would alleviate these issues, allowing more people to be welcomed into school. Another major complaint, mentioned in the State of the School as well, is that the school’s strengths outpace its reputation. To change this, Dr. Shulkind believes we need to focus internally and on general school pride. Getting to that place requires large organizational change, which will be accomplished through the division and house system.

She mentioned that the uncertainty regarding how each grade level will be affected will only be temporary, as each grade will be addressed individually on what these changes mean. While the majority of students will remain with their current Assistant Principals, the current 9th graders will experience the most change, as Mr. Scarlata will become the new division head for 9th and 10th graders next year while Dr. Fauber will take on his role in the middle school.

The end goal of this new program is to create “community within a grade level, but also across grade levels” where students can be known better by both their peers and select faculty, allowing all students to “have something they will belong to.” A house system will be implemented, which will foster community within a grade level and across grade levels. Subsequently, a more predictable trajectory and an easier transition between the Middle School and High School will be created. This will be accomplished as every student and faculty member will belong to two communities: one in their grade level and one amongst the entire 7-12 student body.  7th and 8th grade, 9th and 10th grade, and 11th and 12th grade are paired together in the division system. Teachers will be generally assigned to teach within a singular division. Moreover, the advisory concept will be somewhat modified by this house system. Each advisory will remain exclusive to their own grade level, but will also be part of a house (potentially sorted by color) in which other advisories all across grade levels will be a part of. Members of all different grades from the same house could sit next to each other at Town Meetings or Oneg days specific to the house system. College counselors will each be assigned students from a singular house, allowing them to become familiar with the students from the 9th grade. Moreover, siblings will be sorted into the same houses. Dr. Shulkind emphasized that many of the details have yet to be sorted out, but hopes that this system will further bonding within and between grade levels.

This system has been modeled off of various other successful schools, including the Jewish school systems of Australia and South Africa. Having a greater sense of belonging in Milken through the houses is intended to spark more “spirit, sense of belonging, and a feeling of communal pride” which Milken is currently lacking.

Another goal for Milken is to create consistency throughout the entire school. She suggested that more aspects of classes could become standardized, such as policies on grading and assessments in classes taught by different teachers. She plans to make the student’s “ experience in the classroom be on learning, and not worrying about how to navigate different systems of different teachers.”

Dr. Shulkind has been direct about the challenges that Milken faces and how she plans on solving them. While the new house and division system may appear confusing at first glance, they will work to unify our school and foster school spirit. The general atmosphere among teachers and students is still that of apprehension, as they are unsure about the impacts these changes will have on them. Nonetheless, it is clear that the perspectives of those within the Milken community are being prioritized in order to nurture a healthy, supportive environment and that further details will be provided by the administration in the near future.