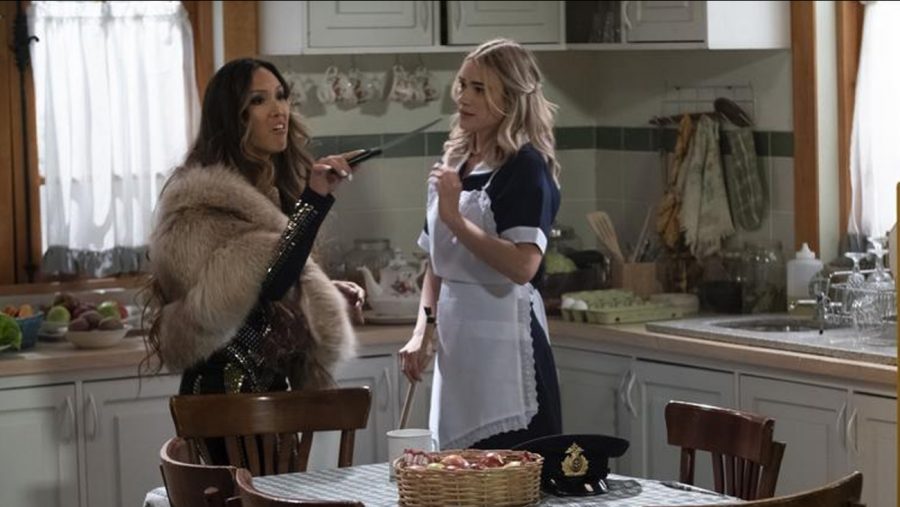 Welcome to Mikayla and Julia’s weekly Bachelor review! We are so pleased to have you in attendance. We’re giving personal opinions and highlights of the episodes which are released every Monday on ABC at 8/7 central and available to stream on Hulu. This article is a special edition because not one, but TWO, episodes were released last week. In these two episodes, Pilot Peter’s journey includes some crazy accusations, an insane amount of potential wives being sent home, and the second exile of the shady pageant queen. Prepare yourselves for takeoff.

Kelsey had a mental breakdown during Sydney’s date with Peter because it was really hard to see the man she loved on a date with a different girl. Sure, this sucks, but she did sign up for a show that literally revolves around that concept. Kelsey decided to comfort herself by confiding in her trusty wine bottle and our drama starter Tammy. Tammy took this as an opportunity to drag another girl down — she told everyone (including Peter) that Kelsey has a drinking issue and was “popping pills” to drown her sorrows. These are INSANE accusations and honestly showed a twisted side of Tammy that everyone hates.

In an effort to ensure that Tammy doesn’t destroy her reputation, Kelsey walked over to Pilot Pete’s hotel room. She opened her heart up to Peter and told him all the rumors Tammy spread about her, and Peter didn’t waste any time jumping to Kelsey’s defense and claimed that Tammy is just jealous of their relationship… oof, bad move, Pete. Peter ended up giving Kelsey a rose — which is simply production GOLD — and told her to show off her rose with pride. To top it all off, the cocktail party ended up being canceled (most likely because of this) and Mykenna had a full-blown breakdown because she wanted Peter to “know her heart” and tonight was “supposed to be a special night for them.” Yeah, you and everyone else.

Kelsey confronted Tammy over the rumors of her supposed substance abuse, and Tammy denied ever saying that Kelsey pops pills (of course). The girls all defended Kelsey by saying that they all heard Tammy’s accusation, and Tammy was further embarrassed when Kelsey revealed that the pills she was “popping” were her birth control and ADHD medication. Nice one Tammy. She started getting attacked from every angle, which is honestly deserved because what Tammy did was really messed up. After Tammy’s many attempts to put the blame on everyone but herself, Lexi stated the obvious: Tammy is clearly upset about her lack of relationship with Peter and she can’t blame it on anyone but herself. Tammy then attacked Sydney (who knows why she felt this would help her case) for the Alayah situation, and Sydney is NOT having it (and neither were we — we’re so over this Alayah situation). She is quick to call Tammy every name in the book: “Crazy,” “Psycho,” “Nuts.” I mean, we’re all thinking it; we’re just glad Sydney said it.

A Two-On-One Transformed into a One-On-One

The date card revealed that Peter wanted both Tammy and Mykenna to be on a two-on-one date in order to get some clarity on the beef between them. This ended poorly because each of the girls was out to get the other one thrown under the bus. Mykenna ended up giving an overdramatic “I’m an empowered woman” speech to Tammy (who could not care less), which included powerful sentiments like, “you made me find my damn voice.” Although, it’s in character for Mykenna to pull every cliché line out of the book because we learned that she’s on this show “for the hashtags” and clearly just wants to leave The Bachelor as a social media influencer (not a wife). Even after Tammy exposed this side of Mykenna to Peter, he ended up taking Mykenna’s side and he walked Tammy out. Bye, girl!

Our social media star Mykenna sadly didn’t make it past the rose ceremony at the end of episode 6. Yes, we know what you’re thinking, “Didn’t Mykenna survive her and Tammy’s Two-On-One Date?” Yes, she did, but that didn’t stop Pilote Pete from brutally dumping her an hour later. Although it seemed a little harsh for Peter to do this, we’re glad it happened because we got to witness the most cliché, unauthentic goodbye speech to ever be delivered on The Bachelor. If you didn’t believe she was here to brand herself as an admired “strong, independent woman,” you surely believe it now. To share some of her inspired wisdom with you, Mykenna said, “Even though I wanted to end up here in love, I feel like I’m more madly in love with who I am than anything.” Teary-eyed, she continued to ramble Pinterest quote after Pinterest quote until all of Bachelor Nation was wholeheartedly confused. Girl, don’t tell us you underwent self-growth during your time on The Bachelor. You literally did nothing but cry and get into fights with Tammy. She clearly wanted that speech to score her some points at becoming the next bachelorette, but she simply gave us a good laugh at her pathetic attempts at becoming an influencer.

On Peter’s first one-on-one of the two-episode extravaganza, he took Sydney on a romantic helicopter ride around Costa Rica. They quickly settled down to enjoy a wilderness picnic, where (surprise!) they didn’t eat a thing. After some quick chit-chat, Peter and Sydney spent the rest of their day making out. Peter told her that she was the best kisser in the house, which is a pretty big statement to make, and probably really awkward to rewatch for the lady that he did end up with at the end of the show. At the dinner portion of the night, Sydney opened up to Peter about her struggles growing up as a biracial kid with a single mom in the South, to which Peter responded by saying he was sad that racism exists and that her struggles will make her a good wife. This just proves what we already suspected — Peter is about as deep as a kiddie pool. They then made out (this time in bathing suits!) for the remainder of the night.

Victoria F. went on her second one-on-one with Peter, which upset the other girls because some of them had not even been graced with a single date. Peter did not seem to care, and wanted to make up for his last disastrous date with Victoria (you know, the one where they got a private concert from her ex). This make-up date, though, did not end up being much better. They learned how to ride horses from a Chilean huaso, which Peter ended up literally sucking at, and then sat on a pile of hay to talk. Victoria F. started expressing her concerns about being there and desire to go home, which escalates at dinner as she storms into a bathroom and cries to producers about not being ready for marriage. Peter should have left her then and there, but she came back, halfheartedly apologized, and decided to try to open up to him more. He gave her the date rose for some reason, even though he explained that he was unsure about his decision in a talking head literally right after. If only Peter had the courage to actually put his foot down once in a while, there might be a much better group of girls right now.

Peter took Kelley to a shaman in the woods to get their energy assessed (what exactly happened was never specified). She clearly did not want to be there, and later asked Peter what ceremonies were actually performed on them, Peter completely ignored the question and complained that Kelley wasn’t competing enough with the other women for his attention. Kelley responded by completely roasting the heck out of Peter, asking him why he was wasting his time rewarding girls that were just there for the drama, and telling him she wants a partner who challenges her. This was BADASS (even Mikayla’s mom, who was forced to watch The Bachelor even though she hates it more than anything, was impressed by Kelley’s candor and poise). Peter’s tiny brain clearly could not comprehend how to respond to a woman who was actually articulate and confident, and gave her a rose (probably out of fear) and made out with her for the rest of their date.

On Hannah Ann’s date, she was confronted by Peter because he found out that she’s 23, making him question whether or not she’s ready for the serious relationship he wants. He interrogated her about past relationships and her experience with love, but every answer Hannah Ann gave didn’t seem authentic AND she admitted to never being in love before (despite being in a 3-year relationship). This obviously made Peter worry because she clearly isn’t mature enough for a lifelong commitment, but after some of Hannah Ann’s tears were shed Peter gave her the Date Rose. Honestly, he should’ve sent Hannah Ann home right then and there because there is absolutely no way this literal child is prepared for the commitment he desires.

Group Date Rose (who got it and our opinion):

For week 5’s Group Date, the girls were surprised with every aspiring model’s dream, a Cosmopolitan photoshoot. The twist to this date is the best model doesn’t only get the Group Date Rose, they get to be featured on the cover of the well-respected magazine with Peter himself. Of course, the girls were desperately attempting to not only get the attention of the camera, but also the attention of the bachelor. During her photoshoot with Peter, Victoria F. pulled her classic Revolve Fashion Show stunt. She grabbed his face and aggressively made out with him while the 2 other girls in the shot awkwardly posed with them. Some girls didn’t pull any dramatic stunts and simply did a great job modeling, but, of course, Victoria F. won the challenge and got to shoot for the cover of Cosmo. We don’t believe Victoria F. deserved this honor for multiple reasons, but our main issue is that she posed in an ad campaign wearing a “White Lives Matter” t-shirt. Ew. Well, she may have gotten the Group Date Rose, but Cosmo refuses to publish those shots on the cover of their magazine because of Victoria F.’s previous modeling job.

For week 6’s Group Date, Peter and the girls filmed an episode for their very own telenovela. Each girl was assigned a different role and, honestly, we’re jealous we didn’t get to take part in this date. Even though their acting skills definitely weren’t good, we were impressed by the girls’ commitment to their roles. A highlight of the date was when Tammy expressed her ability to act the part of the vicious neighbor, even expressing that it’s funny because everyone knows how nice she is. Um, I think you’re mistaken hunny. You’re good at acting the role because you are the role. Anyway… At the cocktail party, Peter needed to destress after sending Victoria P. home, so he requested some alone time with Madison. Peter wrote an extremely cheesy scene of the telenovela for them to act out, which ended with Peter kissing Madison with “the passion of a million Chillean suns.” Ummmmm, okay then. Peter ended up giving the sacred Group Date Rose to our undramatic, well-intentioned Queen Madison.

See you guys next week! Love you so much!