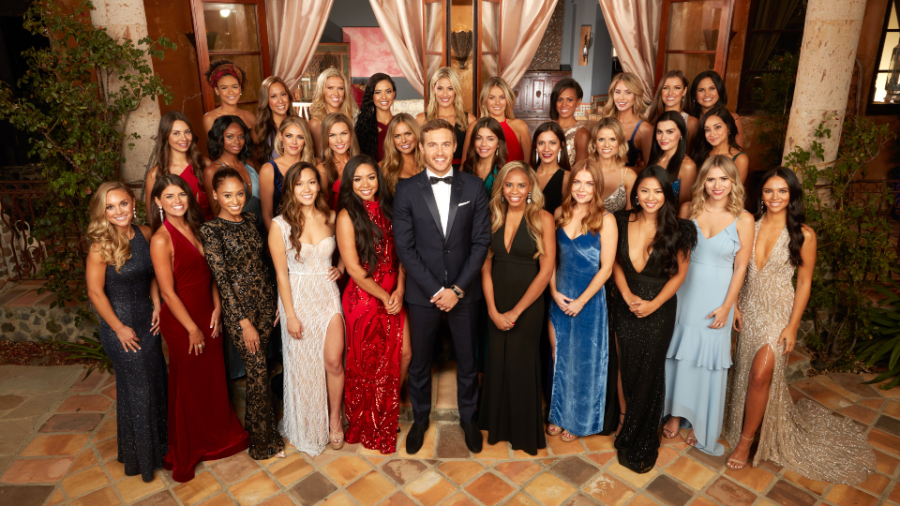 Welcome to Mikayla and Julia’s weekly Bachelor review! We are so pleased to have you in attendance. Each week, we’ll be giving personal opinions and highlights of the episodes as they’re released. Although, we’re a bit behind so we’re going to be catching up on the past couple episodes now. Peter was introduced on Hannah Brown’s season of The Bachelorette — his claim to fame includes his airplane pilot occupation and a fun night (four times!) with Hannah B in a windmill. We are very excited to go on this Bachelor journey with you. Prepare yourselves for takeoff.

Can I steal you for a sec count: 6

Peter kissed a shockingly high number of girls in The Bachelor premiere, eventually tallying up to seven lucky contestants. The first, and our personal favorite — Savannah blindfolded and kissed Peter in her entrance? Go. Off. Hannah Ann stole an insane amount of time and kisses from Peter, leaving the other girls floundering in their jealousy (you could practically see angry smoke coming out of their ears).

Kylie, Jade, Maurissa, Katrina, Megan, Jenna, Avonlea, and Eunice did not make it past the rose ceremony.

The biggest conflict of the episode was the return of Hannah Brown, who rejected Peter in the last season of The Bachelorette. This left Peter, the girls and audiences across the United States SHOOK. She came out of the limo to give Peter back his airplane wings pin, which he gave her on his first night on the Bachelorette. Why did Hannah come all the way to the mansion to return his gift? No one really knows or understands. That’s a mystery only Hannah B. (and the Bachelor producers) can solve.

The next dramatic moment revolves around model and Jesus-enthusiast Hannah Ann, who managed to steal Peter from three other contestants. Julia feels like this is rude and selfish, but Mikayla thinks it shows some serious guts. Peter seemed to love the attention from this beautiful girl because she left with the First Impression Rose.

Okay, another jaw-dropping moment is when Hannah Brown made her SECOND appearance during the premier. This girl just can’t get away from Peter and seems a little crazy for him. In reality, Hannah B. was there because she planned the group date activity, but things took a sharp turn when she cried to Peter about her regrets at sending him home during her season of the Bachelorette. You could clearly see some sparks flying between the former couple, and we were left on a cliffhanger about where these two stand.

The weird part about this introduction is that Peter literally didn’t remember what she said and she had been hanging onto it the whole night. How frickin’ awkward??

Jenna claimed that the cow being an “emotional support” animal — a cow named Ashley P. — was a joke, but everyone seemed to be missing the punchline. It was just really weird and uncomfortable for everyone who saw it, and we were definitely cringing back at home. This cow was probably her downfall because she got sent home. Hopefully Ashley P. gave Jenna the emotional support she needed during her car ride home.

All of them thought they had a leg up because of their unique profession, but their failure to realize that there were three flight attendant contestants made their introductions anything but unique. Unfortunately, you can’t have too many cooks in the kitchen, so Pilot Peter sent the flight attendants home.

Highlight of the episode:

Later in the episode, the girls partook in their first group date with Peter: an intensive pilot training, including a vocabulary and math quiz, an obstacle course, and a gyroscope. Most of the girls were excited for this spinning adventure, but Victoria P. was curled up in a ball on the floor. She opened up about the traumatic teacup ride from her childhood that changed her life forever. A precious trip to Disneyland was ruined when Victoria P. threw up and discovered her tragic flaw: motion sickness. This anecdote was accompanied by a hilariously dramatic slow-motion montage of the infamous spinning teacups. She bravely attempted the ride despite her terror, and ended up having to run into a bathroom to throw up. Peter brought her some water, as any slightly decent human being would, and Victoria P. was weirdly enamored by this, treating it as if it were an extravagant act of selflessness.

First Impression Rose (who got it and our opinion):