How Gun Violence Changed Americans’ Lives in the 2010s 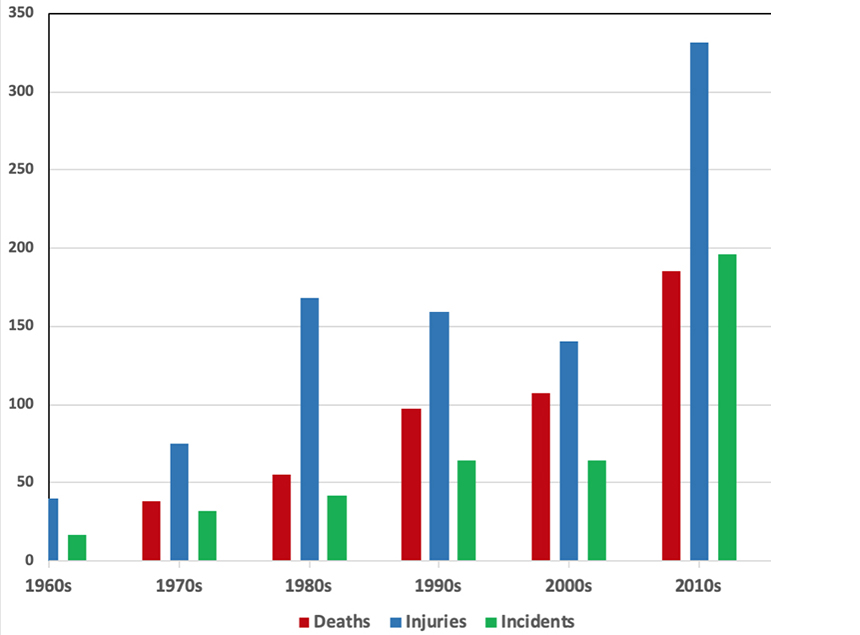 It was August 3, 2019. Jordan and Andre Anchondo were at a Walmart in El Paso, Texas, with their 2-month-old son when the shots rang out. The bullet grazed their baby and both Jordan and Andre were killed. These parents of three were 24 and 23 respectively.

This generation of children has grown up amidst all of the violence this decade has seen. WSB-TV Atlanta sat down with local high schoolers and asked them what it was like being raised in the current climate and how they felt hearing about shooting after shooting–especially on school campuses. Courtney Copland told the news site, “As a high school student it was terrifying, but it wasn’t surprising because it’s one of the norms that are present in our generation today.” High school students today spend time pondering their mortality, wondering if the next shooting could be at their school. They think about shootings instead of school breaks, friendships, and summer plans.

The 2010s have seen a rise in shootings. The National Institute of Justice funded research of mass shootings spanning the past 50 years, and they came up with startling numbers.

Over 33% of cases in the NIJ database took place since 2010 and 20% of those cases took place in the past five years alone. The research found that the deadliest years so far have been 2017 and 2018. Even more gut-wrenching, according to CBS, “the number of mass shootings across the U.S. thus far in 2019 has outpaced the number of days this year.”

All of this has happened despite the declining rates of homicides and violent and overall violent crimes in the U.S. The question remains: why? According to the Washington Post, there is validity to the concern that one violent act can inspire others in the future. In the words of the Post, “Giving a murderer too much publicity might be a bad idea.”

The rise can also be linked to mental illness. Mother Jones did a survey that found that over 38 of the 61 mass shooters from the past 30 years “displayed signs of mental health problems prior to the killings.” Finally, another big factor is the availability of guns. According to CNN, “The United States has more firearms than any other country in the world.” The news site reported that there are approximately 270-310 million guns in circulation in America.