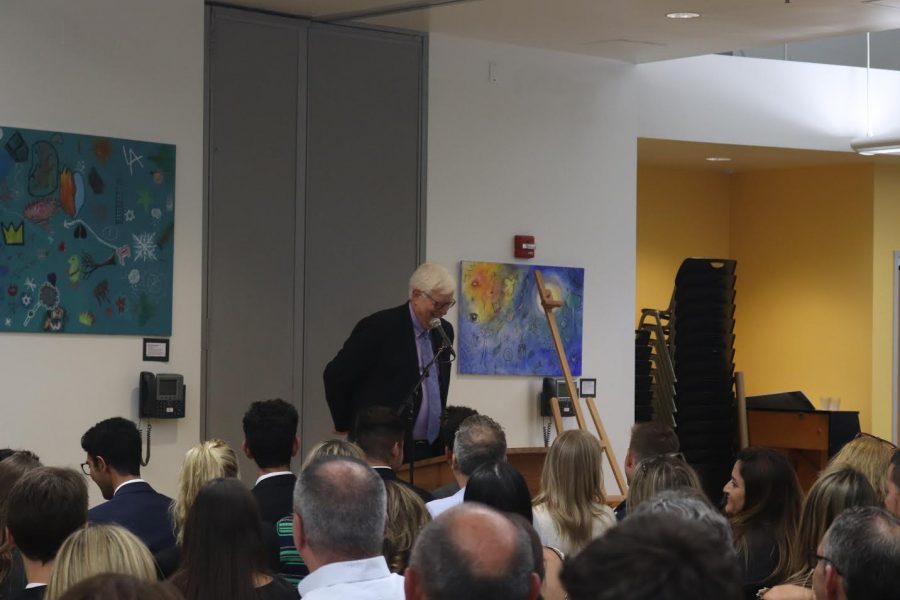 Political commentator Dennis Prager, who spoke at Milken on September 16 at the invitation of the Young Americans for Freedom, made a plea for American Jews to return to their religion and to abandon their idolatry of success.

A champion of conservative ideologies, Prager has hosted a talk show on the conservative Christian radio station KRLA in Los Angeles since 1999. In 2009, Prager founded PragerU, a non-profit organization that creates videos explaining various economic, political, and religious topics from a right-wing perspective. Outside of the political world, Prager has authored commentaries on both Genesis and Exodus and is now working on one for Leviticus.

He appeared at the Milken Middle School to discuss his views on American Judaism. The event began with YAF co-chairman, Joey Sarvian ‘20 discussing the importance of civil discourse. Then Prager dove into his speech.

“What is a Jew supposed to do? That is the question,” Prager began. He went on to explain that during his time in Yeshiva as a young boy, he got no sense of the Jewish mission in the world. When he raised this question to students in his old high school, he got silence. Not only were the students speechless, but they believed that it was heretical to even pose such a question.

“We don’t know how to define our religion and what we are here for and people wonder why so many Jews are alienated,” Prager exclaimed. He posited that the Jews should have a working definition of Judaism. In his opinion, that definition is God, the Torah, and Israel (peoplehood), as put forth by the Talmud.

Prager then went on to explain that the root of American history is based on the Old Testament; its words ring the crown of the Liberty Bell, professing “Proclaim liberty throughout the land unto all the inhabitants thereof.” The founders knew the Old Testament well, he explained, as seen by this prominent display of the Bible. “The Christians who founded America even said that Americans were the second chosen people behind the Jews,” Prager stressed.

But, most modern Jews don’t know that. Instead, many ignore tradition. Many do not see their religion, their nation, as an integral part of their identity. They pursue feminism and humanism, but ignore what Prager explains is the best ism: Judaism. In his words, “When American Jews work to secularize America it will only hurt the Jews.”

Although Prager acknowledged the positives of the Jewish faith, he delved into what he thought could be improved. He joked about Jewish people and their tendency to idolize prestigious universities, suggesting that it was hypocritical for Jews, who abide by the commandments of God, to care so much about where their children go to university. “The way Jews speak about where their kids go to college is idolatrous,” he exclaimed.

He urged Jews to worry more about their children’s characters and morals than their acceptances to universities. His overall mantra about education is that character trumps the institution entirely. He revealed a very personal exchange with his son. ”I don’t care about grades,” he told him, “I care about your character.”

Overall, Dennis Prager shared many of his insights with the audience, some of which viewed Judaism and Jews positively, and others which were more critical. Prior to the event, the Milken community was expecting Prager to share his controversial views with the crowd. However, he mostly focused on Judaism, and through his discussion, he painted a picture of how–in his opinion–a Jew must act in American society.