The Milken Roar • May 5, 2019 • https://milkenroar.com/47509/sports/cif-quarter-finals-victory-milken-boys-volleyball/ 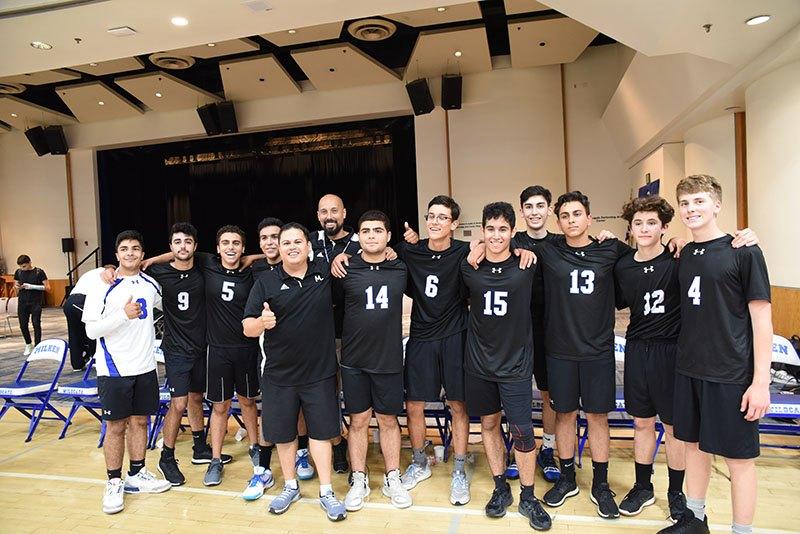 Yesterday, the Milken Boys Volleyball team played in the CIF quarter finals for the first time in Milken’s history. Despite their nascent status, Milken defeated Avalon 3-0. The Roar spoke with the Milken community to hear what some had to say about the match.

“Honestly, the support and crowd was so full of school spirit. They really cheered the team on and I really think that it impacted the way that the the players performed; it was amazing because of the support of their classmates,” said Talia Fouladian (‘20). Not only did the team come out on top, but they also started strong. “It was nice to see that they had a seven point streak off the bat,” Wolfie Hutton (‘20) told The Roar.

Mr. Javy Martinez, the team’s coach, admitted that at first it was scary when the seniors left because they led the team. However, in retrospect he realized that his players were capable of anything they put their minds to, telling The Roar that the team played stronger during this match than any other games during the season. “I have been telling the kids that the key thing is that we are playing with house money. Nobody expected this team to win a game in the playoffs. We won three. Nobody expected us to go further than last year, but we did. This just shows that when you buy in, great things happen.”

Beaming, Martinez exclaimed, “we made a massive lineup change and most other teams would have crumbled, but the chemistry of the team allowed them to absorb it and the gamble worked.”

Martinez went on to talk about specific standout players on his team including Jesse Youdai (‘20), Navid Aframian (‘21), Matthew Makabeh (‘20), and Doron Pakravan (‘20). “Jesse was clutch in the 3rd game, Navid was tremendous in both setting and hitting, Doron hit an awesome serve, and Matthew was unstoppable throughout. This has been a history-making team.”

“I love my team,” team member Jesse Youdai (‘20) exclaimed; “they are like my family.” Continuing with a wide smile on his face, he told The Roar, “We played with heart and fire and it ultimately paid off. I hope we can continue this energy coming into our next game and once we make the finals.” As the seniors have more or less ended their time at Milken, there were a good amount of freshmen on the starting lineup during the games. “They really stepped up and held their own,” Youdai said.

Speaking to the resilience of the team, Doron Pakravan (‘20) told The Roar, “on the second and third games we were down and had our backs against the walls, but we persevered.” Since the matches took place during the school day, hordes of students and faculty filled the gym to cheer on their team and stand by them even during the difficult plays. “Having the support of my classmates really helped me improve my game,” said Youdai.

Congratulations on a great performance, Wildcats!