My experience in the Loyola interfaith exchange 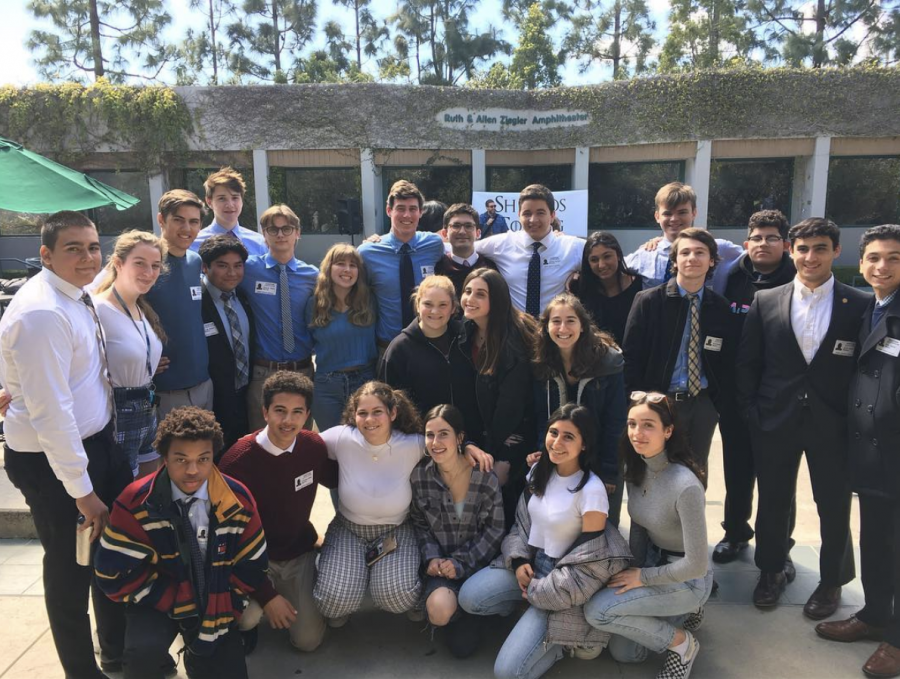 On March 6, 2019, thirteen students, including myself, went to Loyola High School for Milken’s first interfaith exchange program. Loyola High School is an all boys Jesuit preparatory school, and it is very different from the Milken atmosphere that I’m used to. While there, I attended a world religion class and an Ash Wednesday mass service, which I had never done before. I was given the opportunity to interact with seniors that do not share the same religious beliefs as me, and we discussed some of the differences and commonalities between the values of Catholicism and Judaism.

When we arrived at Loyola, everyone was apprehensive as we had never stepped foot into a school like this before. To make things more nerve-wracking, we were easily distinguishable while roaming the halls of the 1,200 student school. After seeing many confused faces while walking towards the classroom, we finally made it. The teacher, Ms. Lee, instructed us to sit with spaces between us in order to be partnered up with one of her senior students. The boys walked in and our nerves began to simmer once we introduced ourselves. We sat with our designated partners and did an activity that taught us about Mardi Gras, urging us to begin the conversation about our varying religions. We compared Lent and Yom Kippur, as both require each religion to fast, making us realize that our religions share more similarities than we presumed. We were taught about Ash Wednesday and the significance of it in Catholicism, and we were given a brief explanation about the “dos and don’ts” of mass. Because we are Jewish, there are restrictions on what we can partake in during mass. Some things are either against Judaism or disrespectful towards the Catholics. For instance, we cannot partake in the Holy Communion, which is when Catholics eat the eucharist, both because it is against Judaism and because it is very sacred to the Catholic religion. After getting the breakdown about the liturgy and interacting with our partners for a few more minutes, class was over, and we made our way to mass.

We walked into the gym where they held their services, and we were led to our reserved seating in the middle of the room. Ms. Lee made us spread out so that we could continue interacting with the boys and they could help guide us through the service. Immediately, I was shocked by the huge men’s choir. There had to be at least 40 students that were a part of it, and they were incredibly talented. The students at Loyola seemed to be much less interested in the choir than the group of Milken students I came with, which is used to seeing the small number of boys in Kol Echad. The way that mass was structured was surprisingly similar to the services I have attended on the high holidays and Shabbat. The Priest gave a sermon, similar to what a Rabbi does at Jewish services, about the significance of Ash Wednesday and the symbolism of the ashes. His speech set up the idea of Ash Wednesday, and how it is a time of reflection and penitence. When it came time for Communion, which is the holiest part of mass for most Catholics, we were given the option to walk up to the Priest, alongside the other Catholic and non-Catholic students, and receive a blessing. I decided to take this opportunity, despite it being against Jewish religious values, because I felt as though this was a unique experience that I wanted to take advantage of. I was slightly uncomfortable and I felt a little guilty for participating, but I mustered up the courage and walked towards the Priest with my arms crossed over my chest, signifying that I was not properly disposed to receive communion and wished to receive a blessing. The Priest touched my head with the sign of the cross and said a blessing to me, and then I walked back to my seat. In retrospect, it was a nice gesture, and I appreciate the openness the Catholic Church expresses towards various religions.

Another part of the service that stood out to me was the portion where we turned towards those around us, shook hands, and said, “May peace be with you.” I thought this was a kind, genuine action, and it gave us an opportunity to connect with students that were not a part of our group. The main difference I saw between synagogue and mass was the liveliness of the service. At Jewish services, the congregation is constantly singing, clapping, and dancing; basically, we are making as much noise as possible. These services are less orderly and more free flowing, as we all are trying to enjoy each other’s presence. We feel like less of a group of individuals, and more a family unit. In mass, it was much more systematic; no one clapped during songs or gave applause after a speech, and people did not sing along to the songs. Also, it was much shorter than the average Jewish service, but this might be in consideration of the school schedule. The general atmosphere was very quiet, civil, and respectful, which is unlike many services I have attended. Soon enough, mass had ended, and students and teachers filed out of the room to get ashes marked on their head in the shape of a cross. They kept the cross on their head throughout the remainder of the day as a symbol of their faith and penance. I could not partake in this, as I would have been uncomfortable and this would also be disrespectful to them. We said goodbye to the senior boys, and it was time to head back to Milken.

On the following Friday, a different group of Loyola students came to Milken to participate in Jewish activities. This consisted of baking challah, eating hamantaschen, reciting prayers, singing a nigun, and participating in a tisch. Baking challah was a little messy, and the boys had difficulty braiding the three strands of dough, but it sparked a lot of conversation about Jewish food and Shabbat. They seemed intrigued by the various types of foods that we eat during different holidays, and they were also curious about what we thought of their services. One of the questions that Rabbi David, who was leading the session, raised was about the Loyola students’ relationships with priests, or the lack thereof. This led to a very stimulating conversation about how we view rabbis as our advisors and go to them for life advice, but most of the Loyola students do not have this type of relationship with their priests. This furthered my understanding of Catholicism as a more structured religion, which is by no means a bad thing, but very different from what I’m used to. After we finished braiding the challah and putting it in the oven to be baked, we began singing a nigun. We all sang and danced, Rabbi David played the guitar, and the boys looked around the room with puzzled expressions painted on their faces. At the end of the activity, we sang a nigun for the second time and the boys enjoyed it significantly more than the first time, and even participated. After the hour elapsed, we took them into the amphitheater and they got to see what a customary 2.0neg looks like at Milken. They don’t have anything like this at their school, and I was amused by how perplexed they were.

All in all, the Loyola students were less eager to participate in all of the activities because this exchange program was a mandatory part of their class, but I still got a lot out of this experience. I don’t think I would have ever gone to a Catholic service or be nearly as knowledgeable about the similarities and differences between our religions if I had not volunteered for this unique and engaging exchange program.