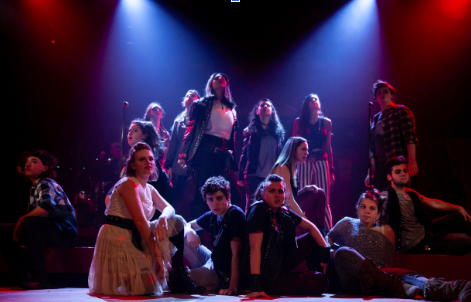 Jacquelyn Stern ‘20 is a dedicated member to the Bloody Bloody Andrew Jackson cast. She became a part of the theater community at Milken in ninth grade when she joined Les Miserables. Unfortunately, she could not be a part of the production last year due to her being on Tiferet. This year, Stern is thrilled to start theater again as part of the ensemble. The Roar was lucky to sit down with Stern and interview her about her experience in the musical.

What is your favorite part about being in the musical?

Performing. Once the whole show comes together with the costumes, microphones, and lights, it all comes to life.

What is your least favorite part about the musical?

For this year in particular, my least favorite part would be that everyone got sick during the week of the show and we had to cancel a few performances.

When did your passion for musical theater begin?

I don’t love theater, but I love acting. When I was eight, I was in a movie with my sister called Wish Wizard for The Make a Wish Foundation and since then I have wanted to be an actress.

What is it like being a part of the cast?

Being a part of the cast is exciting because I feel like I am a part of something that is trying to spread a message and make a difference. A cast is like being on a sports team: everyone gets really close and supports each other unconditionally.

What is a challenge that you and the cast as a whole encountered during this process?

Memorizing lines is always the hardest part. During dress rehearsals and tech week people didn’t know their lines yet and it is difficult to get through the whole show when people don’t know their parts.

Were there any funny moments that happened backstage that you could share with us?

At the beginning of the show, when the first song starts, we all started dancing backstage and had our own little dance party.

What do you think about the portrayal of Andrew Jackson and his attitude towards Native Americans in the show?

I think that it is really sad that this was once real life and that Jackson tried really hard to get rid of Native Americans. I also don’t think he realized what he was doing while he was president and he didn’t think of his actions about a mass genocide. However, his portrayal in the play makes him seem like his actions were very intentional.

What was the project everyone in the play was assigned?

Each member needed to research something from the time period of the play. Everyone was free to choose what they wanted to do and then we made visuals that are hanging in the theater. For my project I did a timeline from the first half of the 19th century.

How does this show compare to other shows you have been in at Milken?

This show is a very different style of music than other shows. All the music is in a rock genre. During rehearsals and shows we really had to work to channel our inner rock star.

Do you have plans to be in the musical next year?

Yes. Because I want to be an actress, being on stage is really exciting and a great way for me to improve my skills.