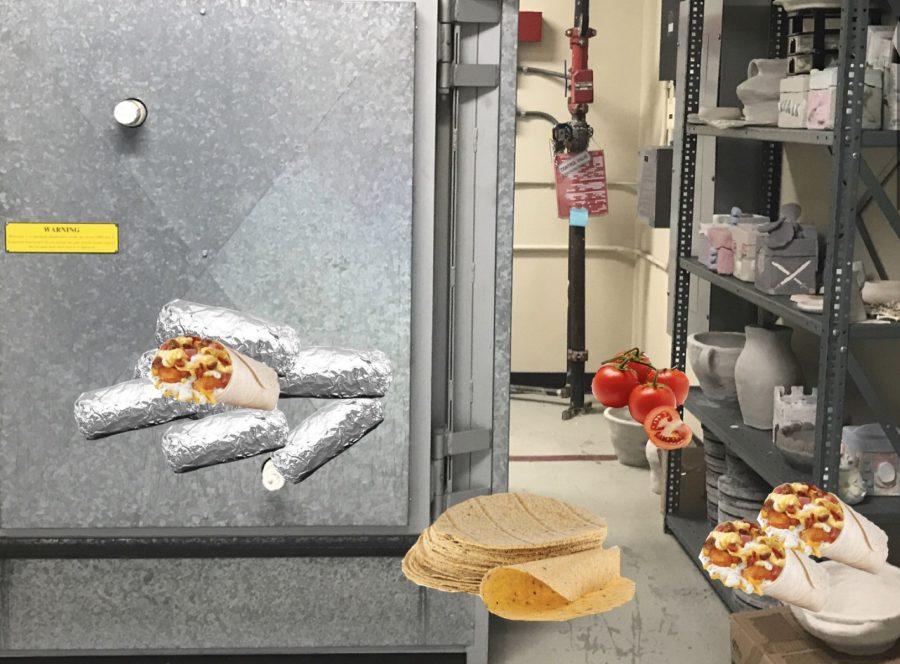 Amidst her Wednesday morning ceramics class, Ms. Mortimer’s students witnessed something she thought unimaginable. A very peculiar rustling sound seemed to be coming from outside of her classroom. Upon further inspection, the source of the sound appeared to be emanating from inside the kiln room, a tiny space which houses the kiln, an oven used to bake ceramic clay. When Ms. Mortimer opened the door of the kiln, both the teacher and her students were taken aback by what lay in front of them. Eyewitnesses report seeing a member of the school’s own Milken Mart kitchen team surrounded by an array of potatoes, sausages, tortillas, scrambled eggs and other incriminating burrito paraphernalia. In the corner of the kiln, lay a pile of the renowned Milken Mart burritos tucked away in a massive padlocked safe. While the employee reportedly insisted that “it’s not what it looks like,” the students, shocked and astounded, shut the door, ran into the classroom and alerted Campus Security. Ms. Mortimer, devastated and speechless, was excused from work for the rest of the day. Less than thirty seconds later, a team of Milken Campus Security personnel, led by Nathan Humphreys, stormed onto the scene and escorted the employee into the security office for interrogation. The defendant, whose name will remain undisclosed, appears to have been truthful about the matter.

Allegedly, the Milken Mart staff was so overwhelmed with burrito orders, that the kitchen facilities no longer had the physical capacity to bake and assemble enough burritos to satisfy the demand. This resulted in the infamous burrito riots of February, in which students led loud, demanding protests during Kehillah and purposefully walked into the Mart with their backpacks on to aggravate the employees. To make matters worse, the school administration refused to expand the kitchen facilities as all capital was temporarily being allocated to fund the construction of a holographic shrine for Theodore Herzl in the Guerin. Baffled as to where or how to make more burritos, the staff eventually decided upon the most unlikely of places, the kiln. Without the consent of any administration or Ms. Mortimer, the kitchen staff began sneaking into the kiln late at night with assorted condiments and ingredients to assemble burritos. The burritos would then be left to bake overnight and would be transported to the real kitchen early in the morning so that no one would witness the crime take place.

This ordeal has resulted in an array of profound negative effects on the members of the Milken community. As of now, the sale of burritos is temporarily halted while the administration and campus security interrogates the kitchen staff. Head manager of the Mart, Leigh Orloff, has been found not guilty of any involvement, and has declined to provide a comment on the incident. Orange construction cones and caution tape currently close off the doors to the kiln, inhibiting the ceramics class from finalizing their completed projects. Sophomore Diba Amid states, “I am truly distraught and simply do not know how I will be able to get through a whole school week without a burrito to nourish my soul.” She added, “I now know the reason behind the smoky flavor in the burritos recently, and I am somewhat concerned for my health.” Amid is just one of the many students who seem to be suffering from burrito withdrawals and now report having seen what they suspect was ceramic chips mixed into their burritos. No one seems to be as affected as Ms. Mortimer: “It has been very disheartening to see my beloved kiln, which has served the school so well for many years, be disgraced in such a way. This week has been filled with many sleepless nights and therapeutic Bob Ross marathons. That being said, I will vow to fight for the preservation of the the sanctity and purity of the equipment for as long as I step foot on this campus.”