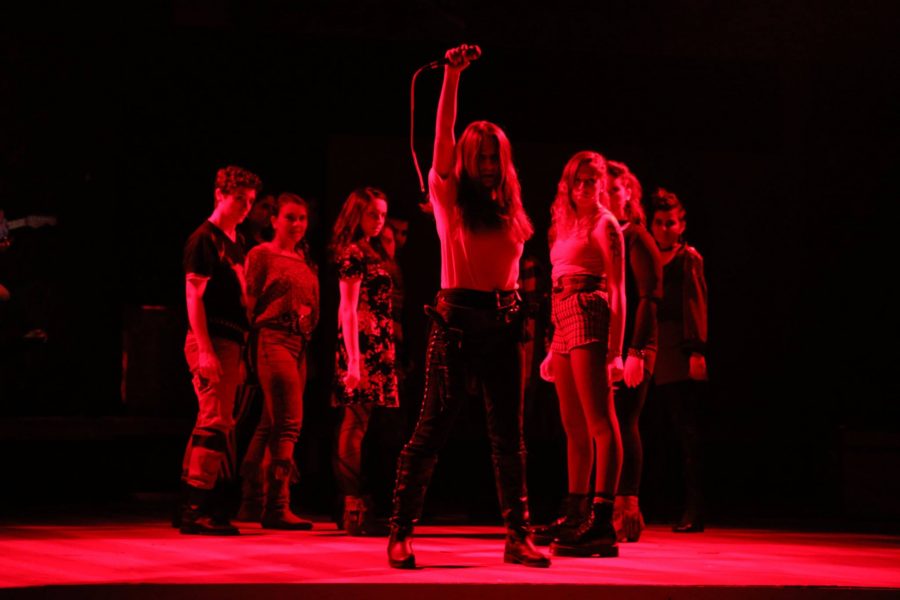 Bloody Bloody Andrew Jackson, this year’s spring musical, has wowed audiences with its daringly funny, yet vulnerable telling of the life of the United States’ seventh president. Filled with explicit language and a catchy punk rock score, the show defies everything you would expect from a musical about a nineteenth-century political leader, yet the passion and drive of the talented ensemble help make it one that’s hard to forget.

Dylan Seidel ‘21, who plays the controversial president at the center of the show, leads the crew with a hilarious and heart-wrenching performance. She captures Andrew Jackson in all of his complexity, forcing audiences to waver on their opinions of a character who should be easy to hate. As the plot progresses, Dylan continues to paint Jackson’s picture beyond the face on the 20 dollar bill into that of a human being.

Ellie Schiff ‘20 is hilarious and quick-witted in her performance of the passionate storyteller, bridging the gap between the audience and the scenes, and Max Rubin ‘21 provided comic relief as the flamboyant and anxiety-ridden Martin Van Buren. Aviva Miller ‘20 stunned in her tear-jerking performance of “Second Nature,” bringing a new layer of meaning to the predominantly comical satire.

All in all, Bloody Bloody Andrew Jackson is a funny, sad, and thought-provoking show that uses nearly forgotten events of history to shine light on current issues. Performances continue at 7:00 PM on March 13 and 14, and at 2:00 PM on March 17.