The Roar Hanukkah Series: Hanukkah around the world 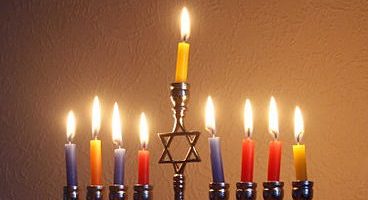 Hanukkah is observed by Jews across the world, and many cultures put a unique spin on the holiday by merging their rituals with traditional Hanukkah practices. Originally, Hanukkah was not a very large holiday; gifts and parties were not a part of the holiday practice. However, due to its proximity to Christmas, Hanukkah tends to be promoted in the United States and widely celebrated around the globe.

Hanukkah, or the Festival of Lights, is the celebration of the miraculous moment when a small amount of oil kept the Menorah in the ancient Temple lit for eight nights. The Jewish people have celebrated this holiday throughout the years by lighting a candle on a Hanukiah for eight nights to represent the miracle and remember the Maccabees’ victory against their foes.

In the United States today, some Jews host Hanukkah parties where they exchange gifts, play Christmas-inspired holiday games like “Mystery Maccabee,” and even create their own Hanukkah bush (which itself is quite similar to a Christmas tree). Below is a various list of eight countries around the world who observe Hanukkah in diverse ways. 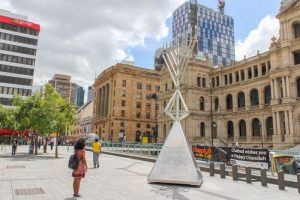 Australian Jews focus on family the most during Hanukkah. There are public opportunities to celebrate, such as at beaches and parks, where latkes and other fried foods are eaten. However, the most common way to celebrate in Australia is with family and loved ones at home, lighting the hanukkiah. Many Jewish Australians begin to observe the holiday on the evening before the first day of Hanukkah, whereas most countries begin to observe the holiday at sunset, the day before. In addition, during Hanukkah, it is summer time in Australia, so many people host Hanukkah block parties and celebrate with their communities. 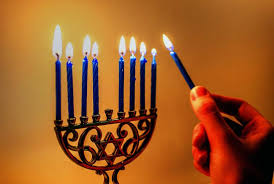 In Yemen, the seventh night of Hanukkah has been devoted to celebrating women in honor of Channah, a heroic women whose story is told in the Book of the Maccabees. Channah sacrificed seven sons in order to safeguard Judaism from the Greeks who were trying to abolish it. In addition to Yemen, many countries in North Africa adopted the tradition of dedicating the seventh night to women.

In India, Jewish people light their menorahs with candles that are not coated in wax, but in coconut oil, which is another way to represent the miracle of the oil. In addition, Indian Jews do not eat Latkes. Instead, they prefer Barfi, a sweet treat made with milk. 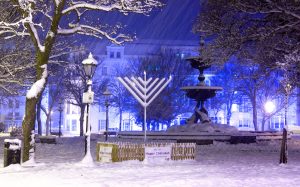 Most Eastern European Jews celebrate Hanukkah similarly. When the Holocaust took place across Eastern Europe, Jewish Europeans had to hide their practices in order to be accepted. Nowadays, in Eastern Europe, Hanukkah is a holiday that Jews in that region do not need to hide anymore. For instance, in Poland, hannukiot are lit everywhere across the nation to recognize the holiday. In addition, in Hungary, there is a huge festival in Budapest called Quarter6Quarter7, which is named after the districts that make up Budapest’s historic Jewish quarters.

In France, Jewish people celebrate similarly to those in the United States. However, in Alsace region, Jews use a double decker menorah with eighteen spaces for candles. This is used so that a father and son can light the menorah simultaneously. 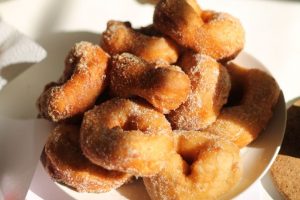 Moroccan Jews might not eat latkes, but they do eat a different variation of sufganiyot or jelly donuts. They eat sfenj, a citrus flavored jelly donut, because during the time of Hanukkah, it is also orange season in Morocco. In this way, they fused their culture with the classic tradition of jelly donuts. 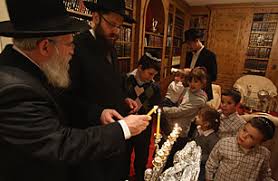 Last but certainly not least, Israel, the home of the Jewish people. Hanukkah in Israel is not all as commercialized as in the United States. There is not eight days of gift giving and it has no resemblance whats so ever to Christmas. However, children do receive gelt or chocolate coins during Hanukkah because it is still a widely celebrated holiday amongst families and communities. They light hannukiot, play with dreidels, sing songs and follow other ritual holiday traditions.