Advice From a Fellow Milken Alumnus 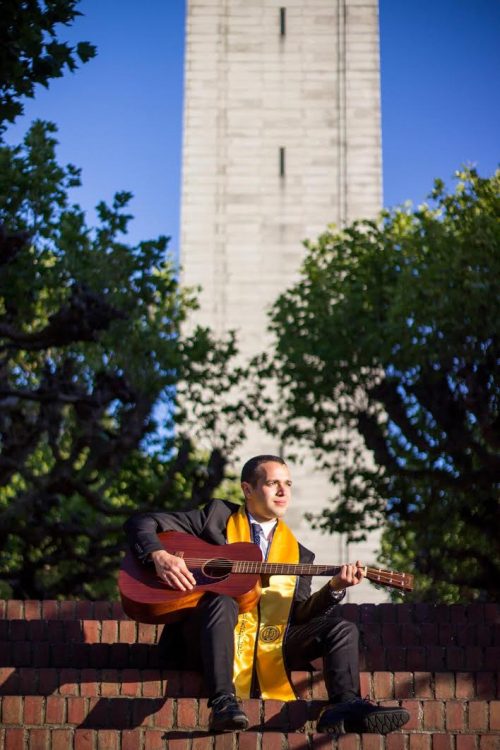 Energy, enthusiasm, creativity, and talent. Those are some of the words that come to mind when watching the performance of Milken alumnus Brandon Shooshani at last year’s 2017 Fashion with Compassion event. The UC Berkeley graduate brought the house down with his amazing rendition of Ed Sheeran’s hit, “Shape of You.” Shooshani is an example for all Milken students to follow their passion and to contribute to their community. He entered Milken as a freshman in 2009 and describes himself as “very outgoing and social in high school.” Music has always played an integral role in Shooshani’s life. In addition to singing, Shooshani plays the hand drums (darbuka, djembe), piano, guitar, bass, and the cello; he says all of these instruments helped shape him into the man that he is today.

Shooshani’s passion for music began at a very young age when he would sing traditional Farsi songs with his father. From that point on, he knew that music was his forte and he went on to play cello in elementary school for eight years. One of his fondest musical memories includes playing cello at Carnegie Hall. “It allowed me to learn about myself,” said Shooshani. Being exposed to multicultural music and musicians was an advantage for Shooshani. He considers Stevie Wonder, Bonobo, Otis Redding, Rhye and Chris Stapleton as some of his biggest inspirations for his love of music.

Throughout his high school career, Shooshani “always had a deep appreciation for music.” Besides his musical passion, he was also a part of the Milken Shpiel, which is one of his most cherished Milken memories. He elaborates, “I had a lot of fun acting in the Shpiel and believe it is essential for one to get involved in school activities to become a more valuable community member.”. The social aspects of high school can be particularly overwhelming, but Shooshani encourages high schoolers to try to accept and even embrace those interactions by staying true to their character and taking certain things with a grain of salt. In his words, “Because teenage years are so emotionally charged, it’s important to relax and even make attempts to be funny, and make people smile when things get rough.”

After completing Milken, he transferred from Santa Barbara College to the University of California Berkeley, where he graduated in 2017. Even when entering college, Shooshani did not know his exact career path, but he always believed that, “it’s important to be a well-rounded student and not put all your eggs in one basket.” For instance, he has a lot of hobbies besides singing and playing instruments which include exercising, practicing yoga, and cooking healthy foods. “Don’t be afraid to try new things and pursue activities that truly interest you,” he says.

Shooshani is incredibly passionate about performing arts and he admits that he would love to sing full time, but he is aware of the harsh realities of the music industry, and thus keeps it as one of his favorite hobbies. Shooshani’s message for timid students is to not be afraid to step outside of their boxes and follow something that they are interested in. However, he wants to make clear that “it is important to decide if your dream or passion is a risk that is worth pursuing as a career, or as a hobby that is avidly practiced.”

Shooshani’s advice for Milken students who are preparing for college, but do not know what direction to follow is to “try to take on as much work experience as possible; it will help you better understand how to choose your major. Don’t be afraid to get uncomfortable and try new things.” More specifically for performers, his advice is to “Just keep singing! If performing music is something you enjoy, don’t give up on practicing. The more you practice, the easier it will become. Take on music lessons in person or through YouTube and learn how to play a musical instrument; it will help you accompany your singing. Search the web for open mic nights near you and use these opportunities to practice getting over your nerves.”

When asked if he finds himself to be the same person as he was in high school, he goes on to say, “I am still the same person in many ways, however in college I made drastic lifestyle changes. In college, I became less shy about sharing my music with strangers and became more passionate about creating different types of music.”