The Milken Roar • May 29, 2018 • https://milkenroar.com/27346/sports/milken-tennis-beats-oakwood-to-win-schools-second-cif-championship/ 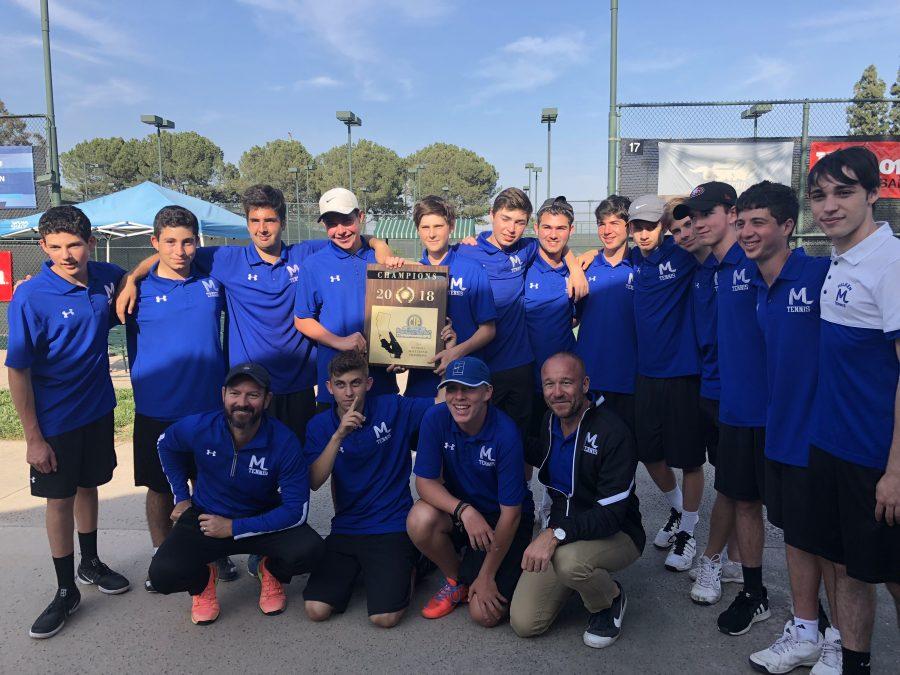 Milken’s title pursuit began on May 7 with a victory over Jurupa Hills in the Wild Card round. On their way to the title match, the Wildcats beat teams from Canyon Springs, Hillcrest, Colony, and Bishop Montgomery. In the final game of the tournament, the team won eight out of the nine sets played in doubles en route to a 11-7 win at The Claremont Club.

This remarkable run seems even more astounding given the state of the Milken Tennis team just a year ago. According to Athletics Director Barbara Iversen, the team did not even have enough players in 2017 to fill a full roster, causing them to automatically forfeit three sets at the beginning of each game. The team was enlarged by a number of newcomers this year, including Ashton Yadegar ‘21, Jonathan Mills ‘21, Ben Hochman ‘21, and Gabe Moretti ‘19. “What’s incredible about this team and what gives us hope for the future is how young they are,” Iversen said.

As for the fact that this victory marks the second CIF title in as many years, Iversen said that she’d “love to see the pattern of a different team winning a championship every year” continue. Milken’s Boys Volleyball team also made the CIF Playoffs during the spring season, adding to the list of Milken teams who were playoff eligible this year. This consistency suggests that Milken’s athletic program is capable of continuing the trend of yearly titles. One potential drawback of winning titles, as Iversen noted, is that teams who win championships have to move up divisions, making the competition for the next year more fierce.

The focus of the tennis team is on celebrating for the time being. “It’s great seeing my teammates as I walk across campus because it reminds me of what we accomplished,” tennis player Jordan Hofert ‘19 told The Roar. “It’s great knowing that we’ve brought a second CIF banner to Milken, and I’m excited to see where we go from here.”