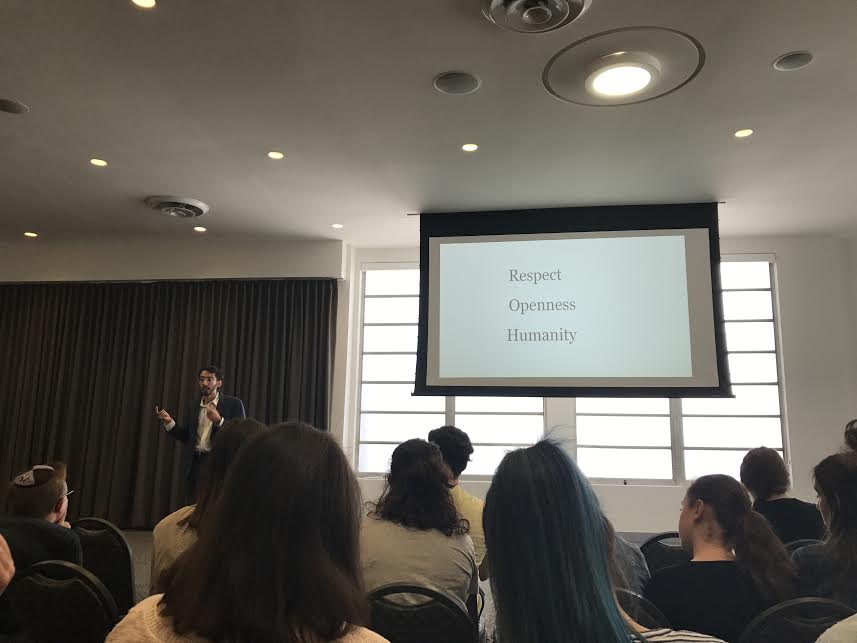 At the end of last week, three members of The Roar staff attended the Jewish Scholastic Press Association’s (JSPA) annual Journalism Conference. The Milken Roar, along with Shalhevet’s Boiling Point, were two of the Jewish high school newspapers represented at the conference and journalism competition. The Roar entered a total of nine Jewish-related articles and photos into JSPA’s annual contest in categories such as Photojournalism, News and Feature Reporting on Jewish Religion, interreligious or intercultural events, and more.

This year’s conference took place February 1-3 at Beth Jacob Synagogue in Beverly Hills. The bulk of the conference was spent avidly listening to distinguished journalists, educators, attorneys, rabbis and public figures discussing how to improve publications, while adding Jewish values and content. There were also opportunities for “swap shop,” where the various publications were able to exchange ideas and learn from each other. In the words of the JSPA website, both the conference and competition are for “high school students interested in looking at journalism through a Jewish lens.”

The major theme of this year’s conference was the moral dilemma of spreading news without committing the Jewish sin of lashon hara, the evil tongue, meaning derogatory speech about another person. The opening speaker, Rabbi Kalman Topp, Beth Jacob’s Senior Rabbi, addressed this moral struggle that Jewish journalists have to face often. In fact, this prevalent societal issue is also represented by the motto of JSPA which originates from Vayikra 19:16: “Do not go as a talebearer among your people, neither shall you stand by the blood of your neighbor.” As can be seen, this verse is contradictory within itself. The first sentence suggests that one shall not gossip and spread news about others, yet in the second sentence, it states that one should not stand idly by their neighbor, making it a commandment to speak out and share news that affects the community. Rabbi Topp concluded by reinforcing the idea that everyone is a Jew first and a journalist second. The question still remained how journalists can report news without violating lashon hara. Rabbi Topp agreed that though it is challenging, as journalists it is important to remain unbiased in every article.

The remainder of the sessions went more in depth discussing the previously mentioned verse in different scenarios. Kathleen Neumeyer, Former Head of Upper School Publications at Harvard-Westlake School, discussed the #MeToo movement and whether or not journalists should write about intimate sexual harassment cases. It was debated where the line should be drawn for reporting sexual harassment issues through a Jewish perspective.

Another prominent speaker at the conference was Shira Dicker, a writer and blogger who took a very unique presentation approach. She displayed snippets of famous movies such as The Post and Spotlight, among others, that share journalism’s inner workings, for better or for worse.

Friday afternoon came to a close with a meaningful Kabbalat Shabbat service and dinner with an address from Ari Goldman, Columbia University Journalism Professor and a former reporter for The New York Times. Goldman closed the conference reinforcing how although it may be difficult for one to practice Judaism and be a great journalist, it is certainly not impossible, which is exactly what many of the lessons at the conference demonstrated.

On Saturday morning, there was a Shacharit service followed by lunch and an announcement of the journalism competition awards. Two members of The Roar staff won awards: Jordan Pardo ‘18 won first place in the photojournalism category for his photo of the Israeli Dance Team pictured in front of an Israeli flag, and Alexandra Orbuch ‘20 won first place for her current event article, “Milken Torah Comes Home,” which described the rededication of the Milken torah after its relocation during the fires.

Overall, the JSPA conference gave The Roar staff many ideas and tools to help improve its writing while still spreading news that reflects Milken’s Jewish values.