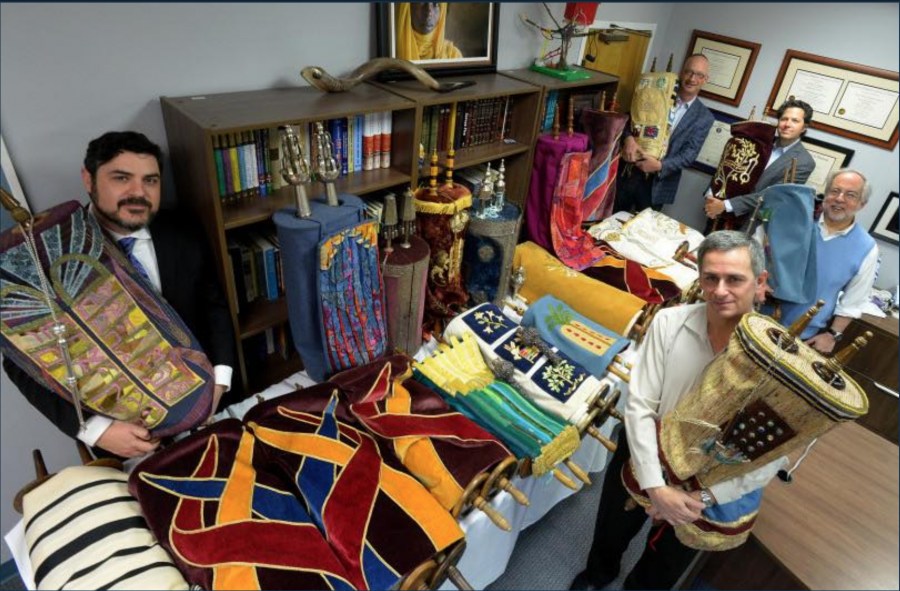 Over the past week and a half, furious fires have raged all over Southern California. As a result, Milken canceled classes until it became safe to re-enter the campus. At 5:00 AM on Wednesday morning (December 6), Head of School, Mr. Gary Weisserman arrived at Milken, in order to see if the cleanup process of the school could begin. Upon arrival, however, it became clear that the fire was extremely close to Milken, and re-entry was deemed unsafe. In Mr. Weisserman’s words, “there was no guarantee that we weren’t going to get hit.”

It was then that the decision was made to move Milken’s Torah to Valley Beth Shalom (VBS). Not long after the arrival of the Milken Torah, the Torahs from Stephen S. Wise and Leo Baeck Temple came to rest at VBS as well. The Milken Torah remained there until early Monday morning, when it was picked up and driven back to campus by Mr. Weisserman himself. That day, a gratitude town meeting took place, during which the Milken Torah was rededicated. Rabbi Gordon Bernat-Kunin entered the gymnasium, carrying the Torah, while the entire school sang Oseh Shalom together. According to Rabbi David Saiger, “We chose that particular prayer because shalom, in addition to meaning peace, means “whole” or “complete.” The return of students and the return of Torah completes our community, makes it whole, so we thanked God for allowing us to become shalem, whole, again.”

In addition to Oseh Shalom, the school recited Birkat Hagomel, a blessing for the survival of danger. This is not the first time that this particular Torah has survived danger, however; Shlomo Bardin, the founder of the Brandeis-Bardin Institute saved the scroll from the flames of the Holocaust in Eastern Europe. Then, in October of 2005, the Torah survived a brush fire that struck Brandeis, and the Torah was subsequently brought to Milken. The Milken community worked with a scribe to restore the Torah, and every student, teacher, faculty, administrator, and board member at the time inscribed one letter on the parchment, making the Torah an even more special part of the Milken community.

In the words of Rabbi Bernat Kunin, “the Torah embodies our history and our deepest values,” and so he felt “awe, humility, pride, and unity” to have had the opportunity to carry the scroll into the rededication ceremony. As Rabbi Saiger noted, “Bringing a Torah back presents an opportunity to express gratitude, and to remind ourselves that as important as buildings can be, the return of the people that comprise a community, and the return of the Torah which enshrines our communal values, offers an important opportunity and ought to be marked with a ceremony.”