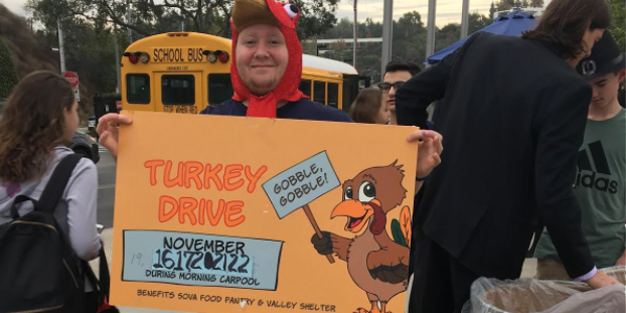 According to the Los Angeles Regional Food Bank, approximately 1.4 million people in Los Angeles County live with food insecurity. The YOZMA Hunger group at Milken, supported by Wendy Ordower, the Director of Service Learning, is attempting to raise awareness and make a real difference in the lives of the needy. Its Thanksgiving food drive has been a signature fundraiser for YOZMA Hunger for the past five years.

The food drive, organized by YOZMA Hunger in partnership with SOVA, began on November 15, and will continue until November 22. SOVA is the most prominent Jewish food pantry in the Los Angeles area, and, according to the YOZMA Hunger co-chair, Ben Chasen ‘19, it “is effective in accomplishing what it sets out to do.” SOVA provides services including free groceries to more than 9,000 people each month.

During the duration of the food drive, members of the group stand at the flagpole each morning with empty canisters for cans to be placed in. The donations will go to SOVA as soon as the food drive is over, and will be distributed immediately throughout Los Angeles. As of Tuesday, the drive has collected $600.

As Celine Zarabi ‘20, YOZMA Hunger co-chair, noted, “every year on Thanksgiving day, we are all so fortunate to have a large meal ready for us to eat, but we do not think about those who are not able to have meals. That is why I believe that it is extremely important to donate cans and money to SOVA.”

As a way to generate even more interest and involvement, the food drive serves as a competition between advisories in each grade. For each can that a student donates, whether it be a dollar or a non-perishable food item, a point is earned by their advisory as a whole. The advisory in each grade that has the most points will win an ice cream party sponsored by YOZMA.

YOZMA Hunger’s ultimate goal is to raise awareness of homelessness not only locally, but nationally and globally. “When you look at the statistics it is shocking to see that one in six people in America are struggling with food insecurity,” Chasen explained. As Lauren Shayefar ‘20, another member of YOZMA Hunger, stated so poignantly, “Hunger is a huge problem that not a lot of people think about. People should focus not only on their lives, but also the lives of others. We are all too focused on school and our grades, when there is a much bigger problem that we need to address.”