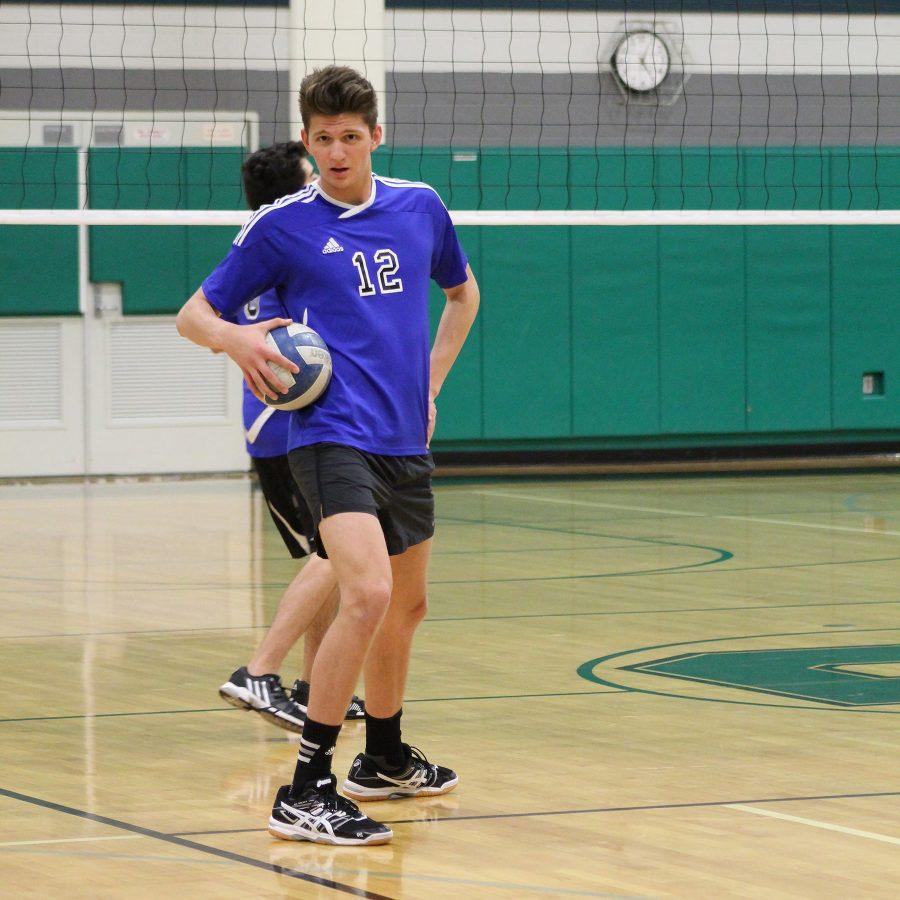 Many Milken students have tried, and subsequently failed, to win the attention of college sports coaches, but Joseph (Joey) Cavallo ’18 is trying to break that stereotype. Cavallo has consistently been working hard since his 8th grade year to accomplish his goal of playing volleyball in college. Cavallo is not your average Jewish athlete. His tall height and crazy athleticism have caught the attention of college coaches, leading to his new moniker at Milken: “Mr. Harvard.” Yes, the rumors are true: Cavallo has been in contact with Brian Baise, the head volleyball coach at Harvard, as well as other coaches from other schools. But many do not know how Joey first became invested in volleyball and how he got to where he is today. Cavallo is one of the few Milken students to ever be recruited by Division I schools and hopes to win one of the highly coveted scholarship offers he has constantly been working to achieve. Cavallo sat down to discuss his story and his recruitment process with The Roar:

How were you introduced to volleyball?
When I was in middle school, my sport was always football. My friends always joked with me about playing volleyball and it was always a thought, but we never went through with it. One day, Mr. [Adam] Steele, came up to me and talked about playing volleyball. He said that since I was tall, I could definitely play volleyball and I could be really good. While this did intrigue me, I did not want to do it unless my friends did it. We all talked and we actually went through with it. If it were not for my friends, I would never have picked up volleyball.

What made you realize you had potential?
It really helped that I was taller and stronger than everyone we played against. In my first season in middle school, we went undefeated and I was having a great time with my friends dominating other teams. I got to high school and everyone got taller and stronger whereas I was just having a good time. I realized I needed to get into the weight room and practice harder than everyone else. I decided to join a club team to see if I could play to the level of other serious players and I did. In fact, when I was a sophomore [16 years old], I was able to play on the 18’s team. I realized that I was good and I could compete with the older guys. I knew at that point I could play volleyball in college.

Who helped you become the player you are today?
Steele. I do not know where I would be without him. He has helped me become a better volleyball player and has helped me throughout this whole process. I was able to sit down with him and write letters to the coaches that were interested in me. Another person who helped me was Liam [Cohen] ‘18. Liam is a really good player. He is extremely talented and when we lost him to Tiferet my sophomore year, I knew I would have to step up my game and become a leader. While we did miss a great player, I was able to become the star of the show and help lead the team. I cannot forget my club coach. When I played for the 18’s at 16 years old, I was not starting and I was not getting a lot of time, but I was making a lot of great plays. He pushed me to become a better player and work harder. I learned never to settle for success and I constantly need to work on my game. I cannot thank all of these people enough.

What colleges are interested in you?
Harvard, Stanford, Princeton, NYU, and USC.

What is the hardest part about being recruited?
Throughout this process, I have had to talk with a lot of coaches. It is very hard to know the right things to say when you meet them. When I went to the USC vs. Harvard game, I told the Harvard coach I was coming and he wanted to meet me after the game. Well, Harvard lost and the coach was not in a good mood. It was really hard to talk to him and I had to be very careful about the questions I asked him. One stupid question and he could have just left. That was the scariest interview I have ever gone through. My heart was racing and it did not feel real. Usually I am a very good speaker, but these coaches are judging me 24/7 and I have to be perfect all the time.