Looking Back on Milken’s Purim Extravaganza 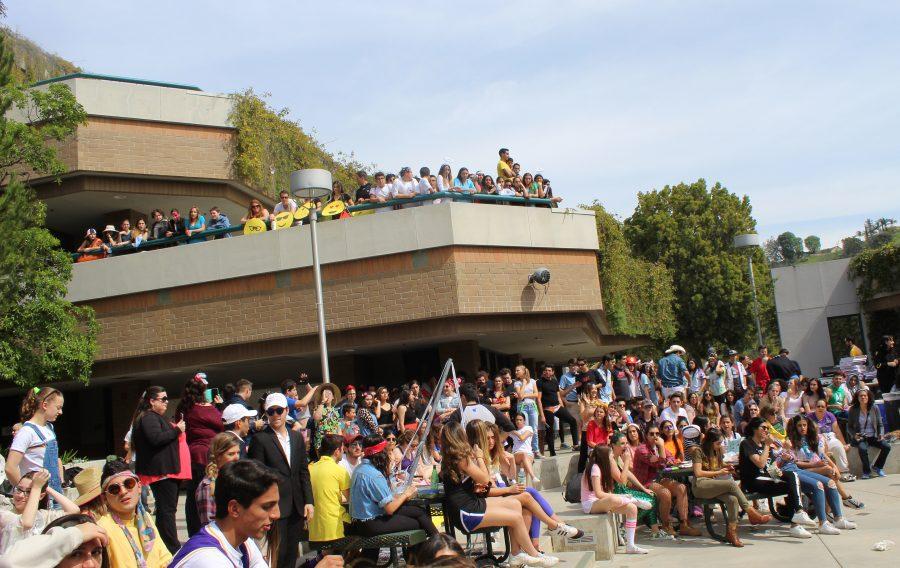 All Photo Credit goes to Jordan Pardo of Yearbook

Last Friday, Milken had its annual Purim celebration. As usual, students and faculty dressed up in creative costumes and went through a fairly relaxing Friday. Lauren Pakravan ‘17 says that she loves Milken’s Purim festivities because, “it’s a day that focuses on celebrating and spending time with friends, rather than just academics. All of my teachers found a way to make class chill, but still related to Purim, which made the day so much more enjoyable.” Students also took the time to snap as many pictures as possible during passing and free periods to savor the memories of the day. However, the most memorable highlights came after normally scheduled classes were complete.

During lunch, the student and faculty costume contests were the first of the school-wide Purim festivities. Teachers went head-to-head showing off their unique costumes. Some teachers planned themed group costumes. Most notably, the science department dressed as characters from Despicable Me with Dr. Scoville, Department Chair, at the forefront  dressed as Gru, the film’s evil mastermind. Science teachers Dr. Shenassa, Ms. Liran, Dr. Lofstedt and Mr. Rayhan served as Scoville’s minions, dressed in yellow suits. They came out victorious – a fan favorite from the start of the competition. Other memorable costumes included Ms. Khorsandi, Ms. Jasper, Ms. Mallor, Ms. Frangi and Dr. Morgan as literary puns, incorporating novels such as Harry Potter, The Catcher in the Rye and Lord of the Flies into their attire. In addition, Mr. Walker, Art Department Chair, dressed as a safari explorer and brought his two children as a lion and a rhinoceros. 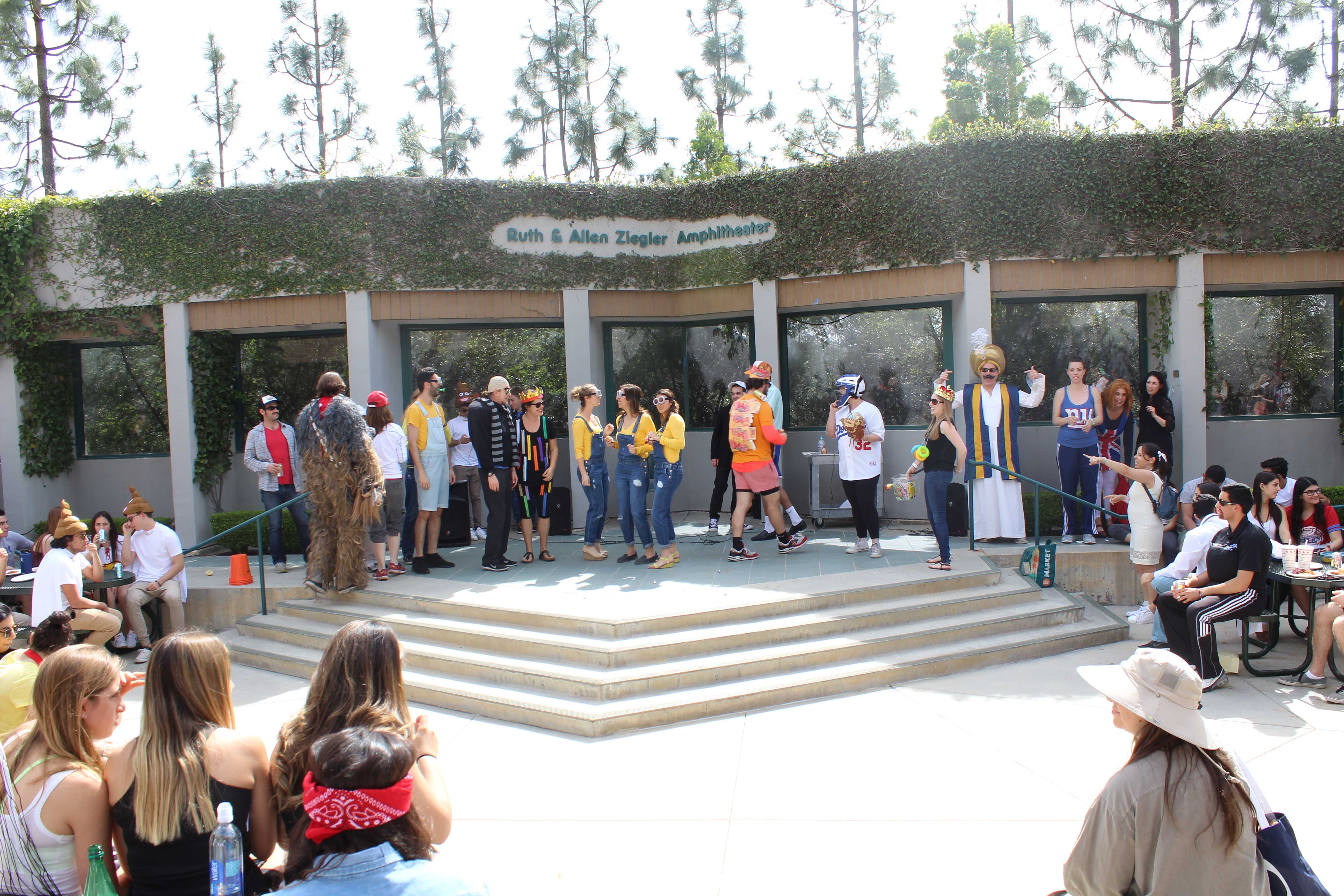 Students took their costumes to a whole other level of creativity at this year’s costume contest. Jessie McAdams ‘20 went all out, arriving on campus and entering in the costume contest as Guardians of the Galaxy character, Groot. McAdam’s raised the bar for years to come, rocking stilts as part of his costume. These accessories allowed him to take on the full persona of the rather large, tree-like creature. Other costumes included Brian Pearlman ‘17, Michael Schulman ‘17, Aaron Lawrence ‘17 and Joshua Berenbaum ‘17 as a s’mores sandwich, as well as Idan Yohanan ‘17 and Daniel Solomon ‘17 as the varsity boys basketball coach, Michael Whiting. Many students participated in the contest, but of all of them, Shaked Salem’s ‘17 Vicki’s breakfast burrito costume stood out as the fan favorite among the crowd. Ultimately, Salem faced Yohanan and Solomon in the final round of the contest and claimed the victory, receiving the loudest crowd cheer of any contestant. The day’s festivities continued as students and faculty made their way to the gym for the performance of the teacher and student shpiels. 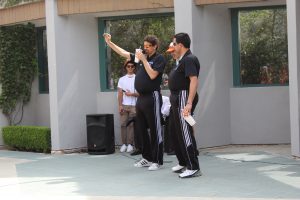 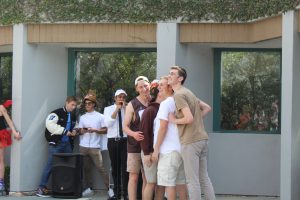 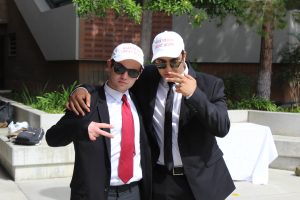 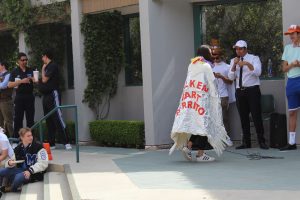 Students were first treated to J-Life’s annual live Purim shpiel performance. Faculty actors and actresses included Upper School Receptionist, Melinda Diner as Esther, Rabbi Menachem Weiss as King Achashverosh, math teacher Harrison Gallway as Haman, math teacher Billy Kaplan as Uncle Mordecai, and Rabbi David Saiger as the narrator. Over the course of their performance, the faculty poked at certain student traits, such as forged early dismissal letters. Both students and teachers alike got a great laugh out of the performance, including Head of School Gary Weisserman, who sat and read the long compilation of forged letters that Melinda had put together for the performance. The faculty shpiel, on the other hand, was a compilation of various memes the teachers submitted to create a short video, prior to the student shpiel premiere. Each meme resonated with each and every grade-level with themes ranging from Dr. Scoville’s difficult biology tests to student fashion choices. The dance team performed a routine in pastel colored outfits. As always, Coach Andrew Rincon joined the squad half-way through the dance. From there, the premiere of the long anticipated Class of 2017 Senior Shpiel finally began. 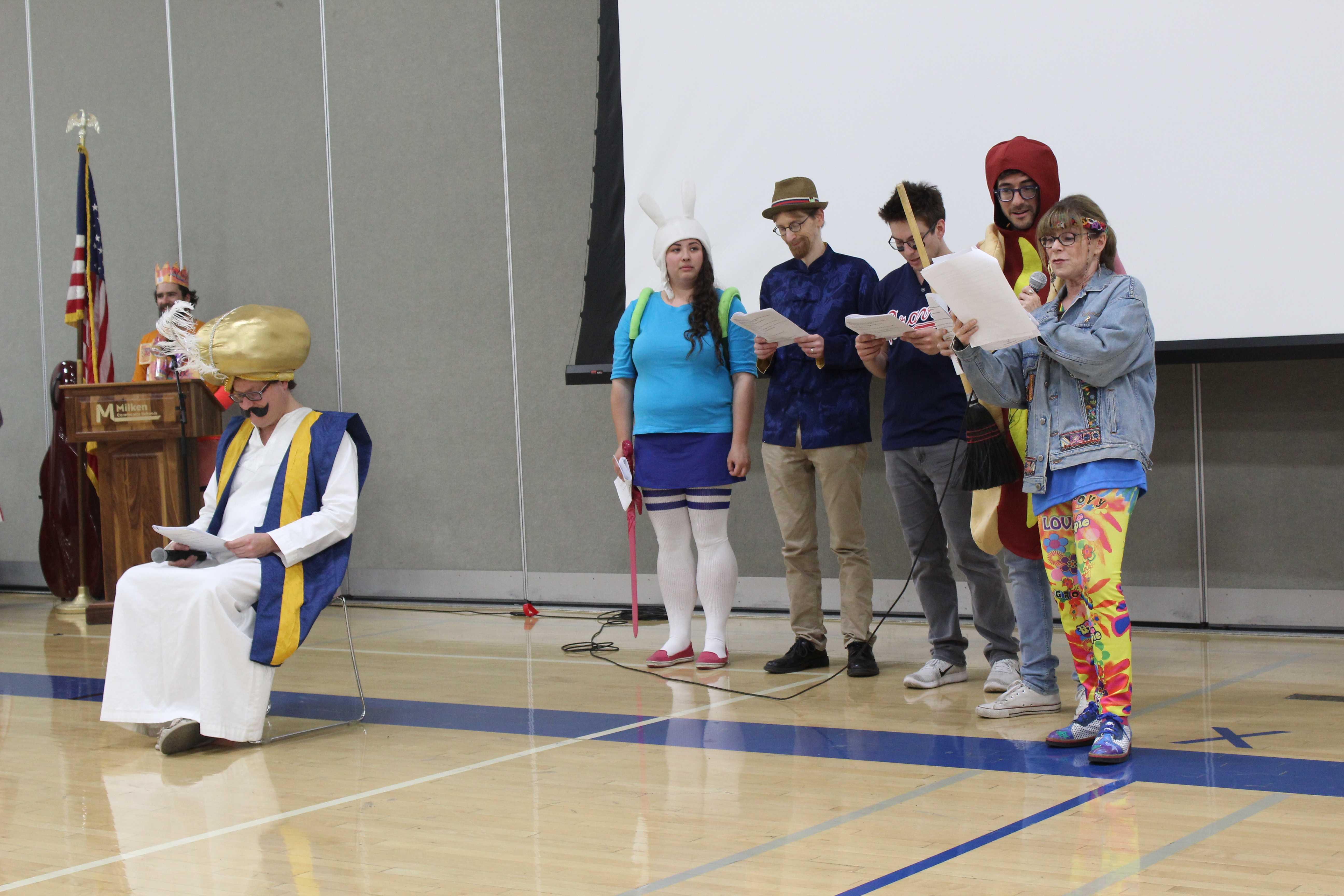 In years past, the shpiel had been presented in the theater behind the Hollander Gymnasium. However, this year the gym was configured with a new state of the art adjustable projector and projection screen. As a result, students now had a clear view of the screen as opposed to the smaller screen used for prior shpiel premieres. Producers and writers Justin Leff ‘17, Brandon Ptasznik ‘17, Sawyer Kroll ‘17, Niv Henn ‘17, Jonah Cohen ‘17 and myself went up to start the presentation with a few words. Throughout the day, the producers wore white hats displaying the phrase “Make Milken Great Again,” both a play on words from President Trump’s campaign slogan in this year’s election, and the title of the shpiel itself. Producer and writer Niv Henn ‘17 discussed his feelings on the student reactions to the shpiel explaining, “Let’s just say that a month before Purim, we didn’t even have a rough draft of the script. Administration thought we were crazy and they were doubtful of it even getting done. But in just the last three weeks, we really pulled it together and made it happen.” Henn continued, discussing his appreciation for his fellow creative team members saying, “Luckily, I was a part of the small group of students who were extremely determined and worked tirelessly to make this the greatest shpiel that Milken has ever seen. And the greatest honor of all was presenting our production to the school and getting unparalleled feedback.”

This year’s Purim celebration was certainly one to remember for both students and faculty, but especially for the senior class. Milken students often ask why Purim on campus is one of the most anticipated days of the school year. The clear explanation is the joyful, celebratory and festive atmosphere Milken experiences on a day when everyone gets the opportunity to express themselves and savor what our community is all about.