Aren’t We All Immigrants? 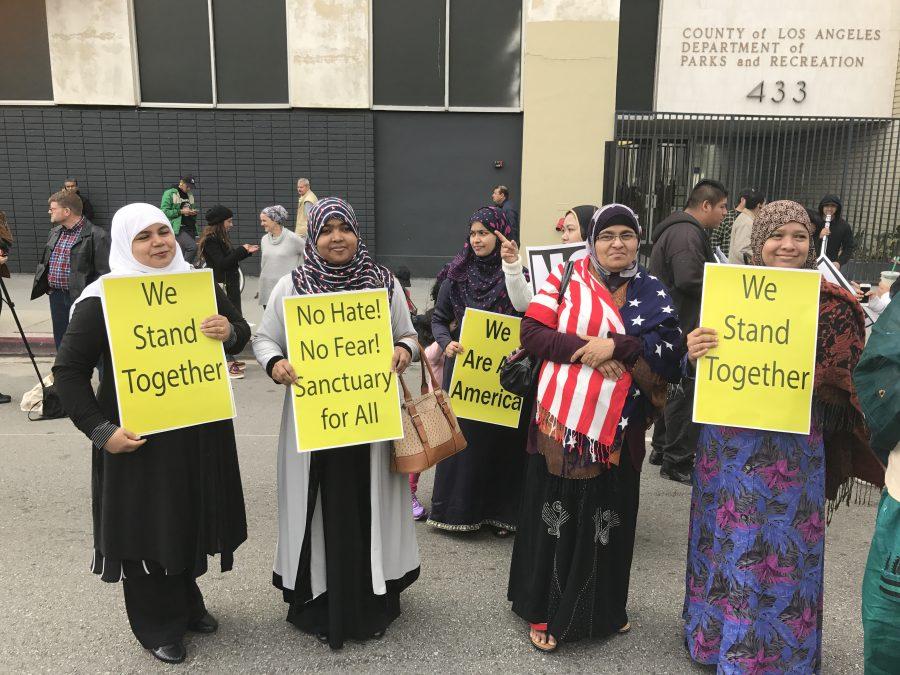 Less than a week into Donald Trump’s presidency, word quickly got out that he had signed an executive order banning immigration from seven muslim countries. Included in the 120-day ban was an indefinite suspension of all Syrian refugee admission. As of now, people hailing from Iraq, Iran, Syria, Somalia, Sudan, Libya, and Yemen (all muslim-majority countries) without American citizenship, who intend on coming into the country, will not be able to.

Already, the sense of fear felt among immigrants intending on traveling to the United States, and relatives of immigrants, has become increasingly prevalent. Overseas students, family members, and citizens of the seven affected muslim countries, worry they may not be able to go where they desire; whether it is for a mere visit or to start a better life here.

What remains unclear is the duration of the ban on Syrian refugees and who exactly will be affected. Many have questioned why countries such as Saudi Arabia and Turkey have been left off the ban when the most recent, major terrorist attacks have come from those very countries. While it is known that President Trump has business and contact with the leaders of the countries, it is mystifying why they were left unmentioned seeing as the intention of the ban was to prevent dangerous persons from entering the United States.

The ban has both been heavily praised and heavily criticized. The response of those in strong opposition has been overwhelmingly prominent across the country. Thousands have gathered in local airports to protest and stand up for what they believe. Ms. Jessie Mallor, Milken Jewish Studies teacher, shared her experience of attending two days of protesting at LAX airport. As a Jewish Studies teacher, she felt it was important to actualize the Jewish value of not standing “idly by.” Rather than sitting by a computer and posting one’s beliefs to Facebook, Mallor believes it is most important to get up, stand up for what you believe in, and “pray with your feet” in the words of Rabbi Heschel.

Mallor sees the ban as an outward expression of Islamophobia and feels it is most important at this time to be an ally. Not only does she see it as a basic human violation, but she relates it to her own Jewish identity, as Jews have experienced an immense amount of hate and blatant anti-semitism throughout history. Ms. Mallor also noted both the vastness and the diversity of the crowds she encountered at the airport, chanting together “show me what democracy looks like! This is what democracy looks like!” or “no wall, no fear, immigrants are welcome here.” At this time of division in the country, Mallor found comfort in the crowds of people peacefully coming together and fighting for a shared goal.

Ms. Mallor rhetorically asked, “how can you teach people Torah without living out Torah?” She is living out her Torah by “praying with her feet”, indulging in her first amendment rights as she liked to describe it, and fighting for what she believes in.

Despite the large number of people who have come together to protest against the ban, all citizens of the country have certainly not been in agreement. Many believe that Trump’s executive order is the beginning of a significantly safer America. Brian Kahenassa 18’ believes the ban is a necessary step in the direction of a better United States. Kahenassa, a son of two Iranian-born parents, shares that while it is not an ideal situation, it “does the job.” According to him, the ban is only a temporary means to keep people who could potentially hurt American citizens out of the country and it is a mere antiterrorism measure. When asked about the possible effects, Kahenessa replied “if changes are made at the expense of a few for a limited amount of time, I think it is ok.” Kahenassa is not alone in this belief and only further proves how divided the country has been in terms of not only the ban in specific, but the presidency in general.

Complicated issues such as immigration never have a simple black and white answer. As a Jewish school, Milken’s student body is embedded with many differing opinions, it is not always easy to remain unified. Many Jewish activists have brought up the fact that all of us Americans were once immigrants. Essentially, everyone who currently lives in the United States has once descended from an immigrant. Immigration is not a clear cut topic, which is why it may benefit everyone to reflect on one’s own perspective and background. It is most important now, to stay wary of what may happen next.