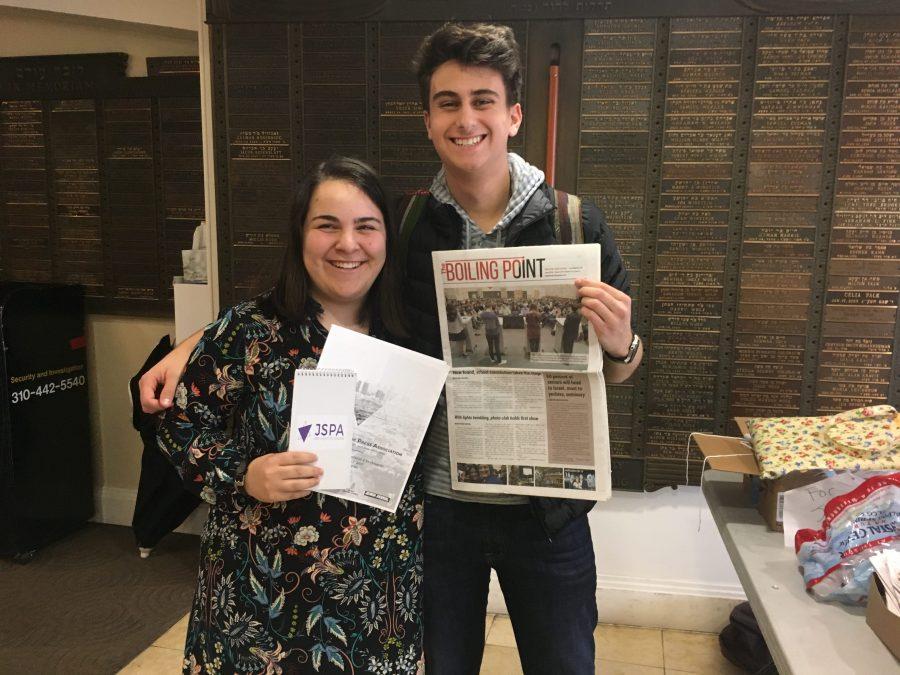 This past weekend, as staff of The Roar, we were invited to take part in the fourth annual Jewish Scholastic Press Association Conference at B’nai David Judea Synagogue in Los Angeles. We took time off from school to represent The Roar alongside peer journalism students from four other Jewish schools. We listened to leaders in the Jewish media and swapped ideas with the Yula and Shalhevet representatives. We met with representatives from Kushner Hebrew Academy in New Jersey and Margolin Hebrew Academy in Memphis, who flew in for the conference. Additionally, we took part in discussions concerning the present and future impact that young Jewish journalists have on the world.

Among the numerous speakers at the JSPA conference was the Editor-in-Chief for the Jewish Journal, Rob Eshman. Mr. Eshman, who has been working at the Jewish Journal for over 20 years, spoke about his experience in looking at news through a Jewish lens, as well as learning to navigate the complicated world of the American media. Another prominent speaker was E. Randol Schoenberg, the prosecution lawyer for the famous case of Maria Altmann. This case was recently depicted in the film Woman in Gold. Mr. Schoenberg spoke about his life, specifically how his work as a lawyer has overlapped with freedom of the press. Other topics of the weekend included, but were not limited to: conflicts of interest, copyright laws, and the art of the interview.

The weekend ended with a meaningful Shabbat in the Pico/Robertson area, where we had the opportunity to learn from Mr. Gregory Zuckerman, a modern orthodox writer for The Wall Street Journal. He spoke about how being Jewish has affected his career, whether it be taking on the role as the office “Rabbi,” or missing the opportunity for a good story because of his Shabbat and holiday observance. We also learned from Mr. Chanan Weissman, the White House Liaison to the Jewish community for President Barack Obama. Mr. Weissman spoke about his experiences working within the federal government as an observant Jew. It was incredibly interesting and humbling to see such a successful and prominent leader in the government also be a fellow Jew.

At the JSPA conference, we learned a great deal about the monumental responsibility that all journalists share. We have a responsibility to our readers, our staff, and above all, the truth. We have already started sharing what we learned with the rest of The Roar staff, and we will begin to implement some changes to make The Roar the best it can possibly be. Moreover, we built relationships with some of the other schools’ newspapers so that we can collaborate in the future and share ideas to improve the journalism programs at our respective schools. We had a wonderful time at the JSPA conference, and look forward to using our newfound knowledge here at Milken.