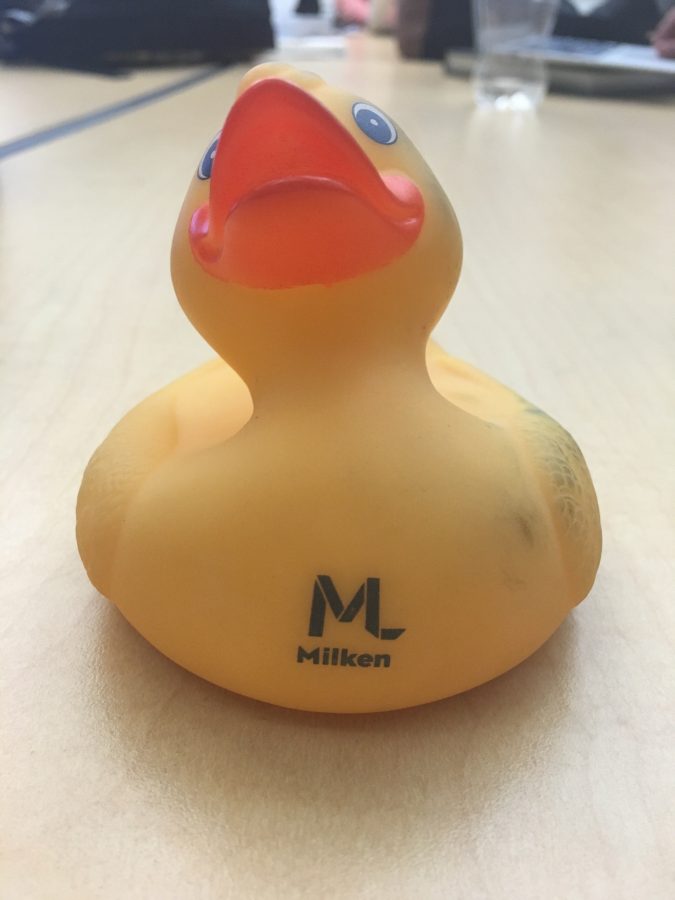 In March 2015, Mr. Weisserman announced during a town meeting that in the summer of 2016 Milken would begin renovating the Mitchell Academy of Science and Technology, Beit Midrash, Architecture and Design Institute, and more. These renovations are pricey, and Weisserman knew that this project would not be a success without several donations. Over the past year, he has been pushing for donations, however, he now realizes that it is impossible to begin the project unless Milken gets a large donation in the next month.

After careful consideration, Weisserman realized the only way to obtain the money quickly was to either raise tuition or sell his beloved ducks. He does not plan on raising tuition. Weisserman said, “When I put my ducks on eBay, I thought it might hit $200,000, tops. But boy, oh boy was I wrong. I knew selling my ducks could help Milken’s financial problems, but not to this extent.” Within minutes, the bid reached 3 million. Weisserman debated whether or not to stop it at 3 million, but the number just kept getting higher. He decided to keep it going, and after a week, the bid reached 18 million dollars.

The winning bidder comes from Providence, Rhode Island and is an avid duck collector. He saw Weisserman’s rubber duck collection as an opportunity to expand his own collection, and eventually make some money off of it. Weisserman says he will miss his first duck the most, noting, “selling my ducks is an incredible opportunity for Milken to grow. As I always say, my goal is to make Milken the best school in the country, and have the best school in the country be a Jewish school. Selling my ducks allows us to do just that.”

Weisserman is extremely excited for this new chapter in Milken history, starting with the renovations. He is most excited to see the success of the new MAST building. Because the renovations do not quite cost 18 million dollars, Weisserman will allocate the rest of the funds towards the golf team and the Roar’s new print edition beginning in September. Although it may be at the cost of his ducks, Weisserman is beyond excited to see the future of Milken.