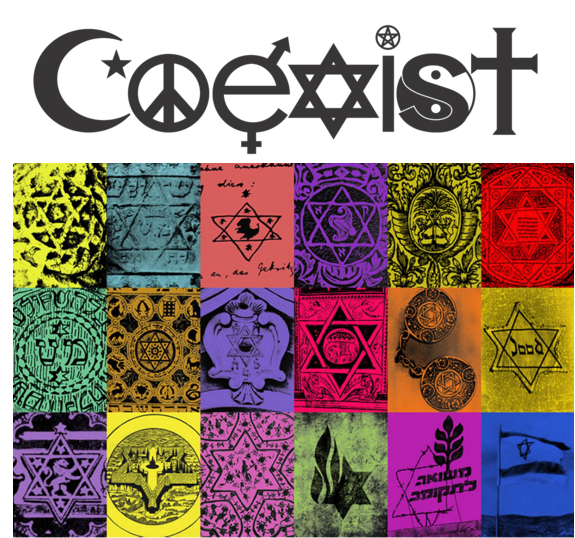 Just last week, I found myself in in Mr. Weisserman’s office, realizing 1) the stark juxtaposition between our head of school’s crisp grey suit with his bright yellow collection of rubber duckies, and 2) how the results of the survey recently administered plays into the reality of pluralism at our school. In attending Milken, you have surely heard the word “pluralism” in one context or another. But my mission- the very mission that urged me to meet with Mr. Weisserman- was to try and figure out what pluralism (ideologically and realistically) means here. According to Rabbi B.K., important aspects of our identity as a pluralistic school are that “no one has a monopoly on truth” and that “we do not have a singular vision of Judaism (we are not [purely] Reform, Conservative, Orthodox, Reconstructionist, Ashkenazic, Sephardic, etc.).” The most fascinating aspect of this reality, to me, is that we have a singular identity that is not characterized by homogeneity, but rather by a diverse array of smaller identities. And according to the survey’s results, Milken lives up to its alleged multiplicity with Jews from all different sects of Judaism (see below). 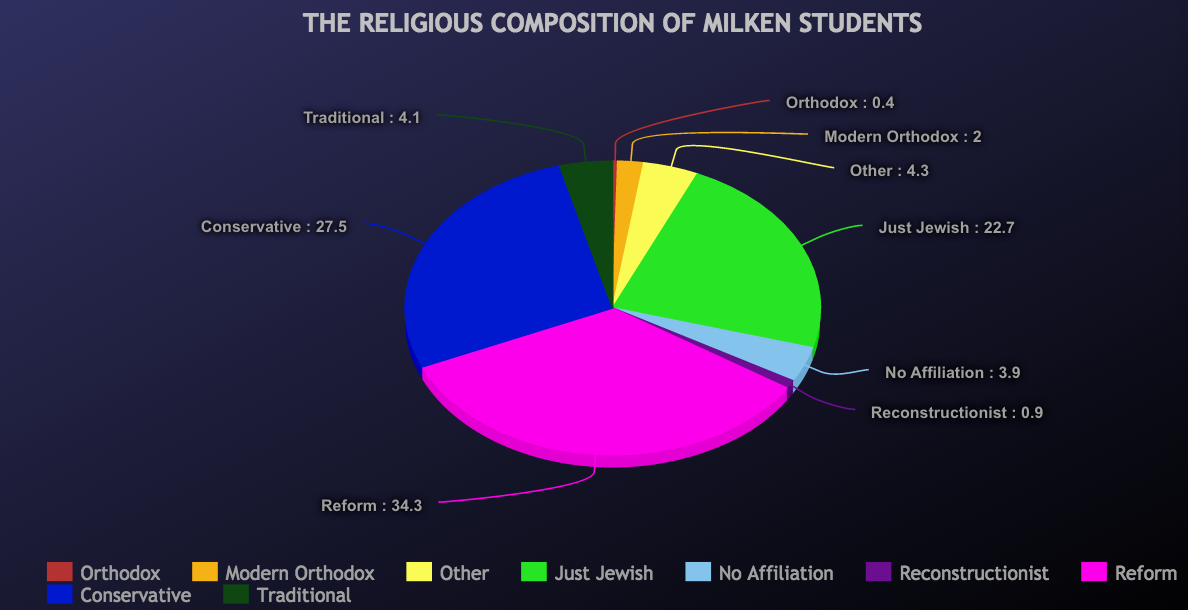 Note: All students self-identified. Those marked as Traditional said that they were Traditional, but attended Reconstructionist or Conservative temples.

These results are nothing short of expected: of course we have diversity. But what is less emphasized is the clear majority of Reform and Conservative students and the tiny fraction of Orthodox and Modern Orthodox students. How do these demographics affect the implementation of pluralism at Milken?  According to two other questions from the survey, although the majority of Milken students were satisfied with the amount of Jewish activities on campus, there were five times as many students who wanted “far fewer” Jewish activities as opposed to those who wanted “much more.” Hence, an inevitable complication comes up in our implementation of pluralism. It is very difficult to create an environment that pleases everyone and allows everyone’s affiliation to be reflected in school-endorsed practices when over 60 percent of our populous affiliates with either the Conservative and Reform movement, compared to 2.04 students affiliating as Orthodox and Modern Orthodox. The absence of a contiguous identity, just like the presence of a strong sectarian identity, can leave people (albeit a minority) feeling estranged. To get a more wholesome understanding of this minority, I went on a search to find people who, in one way or another, associate with Modern Orthodox Judaism.

Tammy Shine ‘17, for example, identifies as Modern Orthodox and described her “alienation from the Milken Jewish society” as one that stems from the students having “less-widely shared Jewish experiences.” She explains that this sense of alienation has been manifested at Milken “on Shabbatons, when [her] bunk mates are using their phones on Friday night” because it is a “different type of Shabbat experience than [she] is used to.” She feels differently about Judaism than her peers in that they often perceive “attempts at more observant activities” as “attempts to force students to do something religious.” Regardless of this sentiment, Tammy reminded me that just because she may feel alienated at times, she “loves and appreciates that there are many ways to be Jewish.”

Naomi Gluck ‘16, who isn’t personally affiliated with Modern Orthodox Judaism, but whose family is, expressed that her friends at Milken, who “have only been exposed to very liberal, accepting Judaism” are often shocked when they hear stories about her temple. Naomi also explained that she used to refrain from using her phone on Shabbat, which made it very hard for her to “contact any of [her] school friends” and she realized, especially on Milken Shabbatons, that “it’s harder to stick with your customs and beliefs when you’re one of the only ones.” What I found eye-opening about her perspective was that she expressed that “Milken does a good job of offering many options and allowing people to choose if they want to take advantage.” Naomi was enrolled in Beit Midrash and “joined Jewish-themed clubs” because the involvement felt sufficient for her while also not making extra Jewish commitment obligatory for those who don’t want it.

The school does live up to it’s label of pluralism by providing only kosher food, not allowing activities to occur on shabbat, giving Jewish holidays off of school, as well as having more rigorous Jewish courses like Beit Midrash and Jewish clubs for those who are interested. However, to Tammy’s point, among the student populous, the “word of mouth” attitudes toward Jewish courses and activities don’t feel so pluralistic. Perceptions of Jewish activities are generally negative: regarding Jewish activities as corny, boring, or forced- unless they include free food, of course. This has made it hard for many, myself included, to truly indulge in Jewish events and find a stronger Jewish connection at school.

Our challenge at Milken, in Rabbi B.K.’s words, is not to merely tolerate each other, but rather “[learn] from and [engage] with our… differences”- to interact “with honest, curious, sensitive and critical listening.” This has proven quite difficult to enact in a school that intends to accept all identities open heartedly and in which there is a lack of coherence. There is no system that is perfect and it is naive to expect any school, or any institution for that matter, to represent every individual perfectly. Even schools that associate with the Orthodox, Conservative, or Reform movements exclusively have students who feel isolated from the school’s sense and practice of Judaism.

All of this ultimately boils down to what the goal of our educational environment is. Is it to strengthen the beliefs we held about the world and ourselves when we first entered, or is it to be a place of grappling, exploring, and qualification? As someone who comes from a Modern Orthodox family, I have personally grappled quite a bit with my Jewish identity as I have heard the perspectives of all types of Jews during my time at Milken. Something I really hope for, however, is to hear and see more inclusion of the Modern Orthodox and Orthodox perspective. With this inclusion, a truly pluralistic society could be created as a place in which the majority’s (Conservative and Reform) views and understandings of Judaism could also be challenged, and they too could have the option to explore the discrepancies between their own Jewish path and that of others. All in all, learning is not learning when you merely have your preconceptions and perceptions of yourself solidified by people who agree with you. Learning is only truly learning when your eyes are opened to things you have never been exposed to. Learning is only truly learning when you look at both yourself and your surroundings in an entirely new light. And what I hope for Milken is for that explorative, grappling, Jewish learning to begin to flow between everyone- Conservative, Reform, Orthodox, or otherwise.