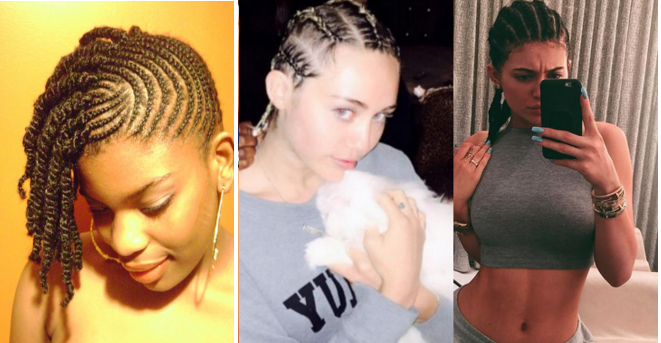 Walking through a night bazaar in Mexico with my family this past summer, my eyes were caught by all the brightly colored beads, painted skulls, knick-knacks, generic tourist T-shirts and gesticulating merchants. Nestled among the bright colors and commanding yells, I somehow caught sight of a rather humble lady braiding people’s hair in cornrows. “Nice,” I thought. “Cornrows look cool, why not try ‘em out?” I got my hair braided and I loved it. However, after attending a Student Diversity Leadership Conference early this December, I learned that the fact that I, as a white-passing person, got my hair braided in such a way, isn’t so cool, and is perceived by many as “cultural appropriation”- especially after the black community has voiced how insulted it is by non-black people wearing the hairstyle. 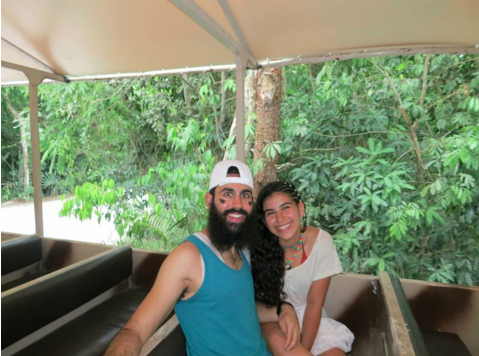 My brother and I in Mexico this August. Photo Credit: Brandon Cohen

Since then, I have learned much about what cultural appropriation means and the role it plays in American society. But before getting into a discussion of such complexities, it’s important to define cultural appropriation. Here is Wikipedia’s definition, which, keep in mind, is quite oversimplified:

A screenshot of google answers.

Many argue that the issue with someone who is not black wearing cornrows or dreads (as exemplified by me, Miley Cyrus and Kylie Jenner) is that such hairstyles are important characteristics that a people have developed for themselves, and while black people are often looked down on as trashy when wearing cornrows/dreads, others who sport the trend are seen as hip and edgy. This in and of itself is another form of subjugation as it implies the issue is not the hairstyle, but rather the (black) individual wearing it.

However, things are more complex than they initially appear. Can’t wearing dreadlocks and/or cornrows be seen as a way of integrating black culture into mainstream American culture and henceforth creating a more inclusive society? Can’t braiding or twisting your hair in such ways be seen as a way of embracing another culture in an attempt to fulfill one’s self-expression and endeavors of diversity? For most who believe in the detriment of cultural appropriation, the answer to both my questions is a firm “no.” And to be clear, for those same people, the issue involved is policing what aspects of oppressed cultures white people can partake in to prevent further oppression and disrespect.

I am still personally unsure of where to draw the line between respect and disrespect when it comes to interaction with another culture. American society is melded from the diverse cultures of those who have found and continue to find shelter and freedom in America: Europeans, Africans, Iranians, Chinese, Indians, Mexicans, Spanish, Japanese, etc. In the melting-pot that is America, a place where there is no singular, simplistic, or contiguous American identity, where do we draw the line between cultural appropriation and cultural appreciation? How can we lead an existence in which we continue to appreciate and integrate the cultures around us into our lives while still being sensitive and respectful to the people of such cultures?

According to Jarune Uwujaren’s article, “The Difference Between Cultural Exchange and Cultural Appropriation,” cultural exchange has to be mutual and welcomed by someone from that culture for it to be okay. Furthermore, she eloquently states that “using someone else’s cultural symbols to satisfy a personal need for self-expression is an exercise in privilege,” considering how many groups of oppressed people have “felt forced and pressured to change… just to earn enough respect to stay employed and safe” and whose “modes of self-expression are still limited.”

Some believe that what is most important to prevent cultural appreciation from becoming appropriative is the intent behind the person who is interacting with a culture that is not theirs. A Persian SDLC student, Chloe Khosrowshahi, says that there is no problem when someone wears Persian apparel with understanding of the clothing’s meaning, but the problem arises when that person’s intention is to ridicule the culture or to simply look pretty, rather than what would be okay: consciously engaging in a respectful, culturally immersive act. Kai Song, another SDLC student, proclaimed that “If any cultural appreciation is happening, someone from that culture has to be deliberately and willingly inviting that person to partake in it.” 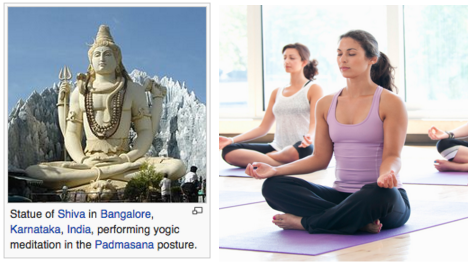 Yoga has been an integral piece of mainstream American culture for quite some time, and I have yet to hear of any group of Indian or Buddhist descent coming out and proclaiming: “We feel comfortable with Americans utilizing yoga- something rooted deeply in spirituality and Buddhism and Hinduism- as a relaxing workout.” And, likely for that reason, students at the University of Ottawa have pressured the school’s yoga teachers to end the University’s yoga classes. But has any group or movement of Eastern descent or affiliation gotten together to protest against yoga because of how offended they are by its practice in America? Not that I’ve heard of. Hence, I don’t think it is the place of students at U.O.O to be offended on behalf of other cultures, nor the place of any person to tell one of another culture when something should (or shouldn’t) offend them. What is important, though, is to be empathic to when the people of that particular culture voice that they have been hurt by cultural integration that has gone too far. In terms of my initial example, cornrows, many people of the black community have spoken out against people who are not black wearing cornrows- and for that reason, any non-black person should be empathic toward that call and respect black culture by refraining to partake in certain aspects (regardless of how “cool” they look), lest it be oppressive.

Brandon O’neill, the author of “This obsession with ‘cultural appropriation’ is leading us down a very dark path,” believes that such empathy and refrain is “ultimately a demand for cultural segregation” and that the ideology of cultural appropriation is an “obsession with cultural purity [that] echoes some of the darkest political movements of the twentieth century.” Although his opinion is not often heard or discussed in the context of cultural appropriation, I believe that it is very important that we, in our approach to contemporary issues, do not plague ourselves with hypocrisy and mute out the voices of those who don’t agree with us. If one preaches listening to the stories and voices of all, all voices means all voices; it means listening to what each person has to say and really thinking about their thoughts rather than jumping to conclusions and searching for labels by which to dismiss their opinions. I believe that if you want to act, act consciously, with intention. And if you consider yourself to be one who listens to “voices” and creates a safe space, listen to each voice and hence make it a real safe space, rather than one that is fabricated by censorship of the voices you don’t believe are “politically correct” or “right.”

I now realize that Ice Cube has been right all along, and the moral of the story really is, “check yourself before you wreck yourself”, my friends.