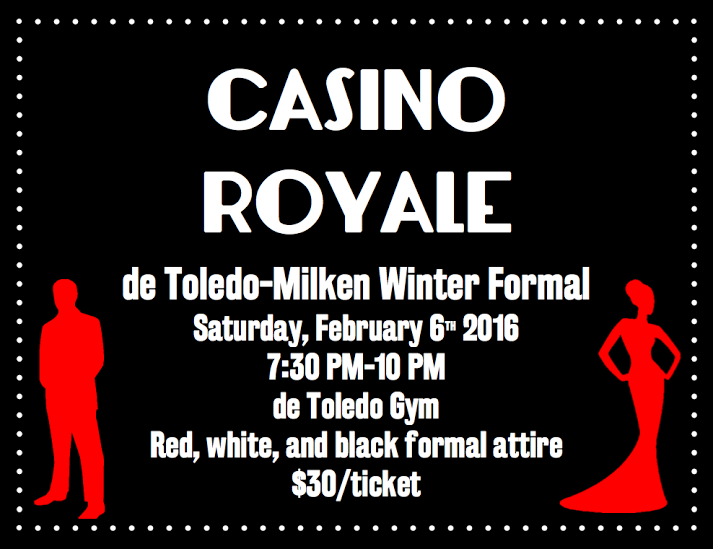 With Winter Ball coming up on February 6, both Milken and de Toledo students are wondering how the two schools ended up joining forces and how the formal will be extra special.

In the past, the Winter Ball has been an event exclusively for Milken students, who each are permitted to bring along one outside guest with the proper paperwork. However, due to the dance’s attendance dropping significantly over the past few years, Kayla Mehdizadeh ‘16, Co-Social Chair, wanted to “make this year’s formal epic.”  Student Government then made the choice to join forces with de Toledo this year. Elliot Shahery ‘16, Co-Social Chair, says de Toledo is the best school to collaborate with because “we are two Jewish high schools with similar values and friend groups.”

Student Government contacted the Student Council at de Toledo who quickly agreed, also thinking collaboration is a great idea. de Toledo happily provided their gym as a venue, and because it is far from students who live in the city, Milken has agreed to provide bus transportation to and from Milken.

Together, the student leadership groups decided on the theme of “Casino Royale.” They are encouraging students to wear red, black, and white formal attire, and all decorations will be casino themed. For the students not interested in dancing to DJ David Zarabi ‘16’s music, there will be a number of card games. Because the two schools are collaborating, Ms. Miller feels that they are able to “scale up the event in fun new ways,” and are even “trying out a food truck.”

The Student Government feels that this is a major benefit to both schools. With the two schools teaming up, Shahery ‘16 says, “[students can] expand their friend groups and [get] the chance to meet new people.” Mehdizadeh ‘16 says that because of the collaboration, the Winter Ball will be “bigger, better and more fun for all the students.”

Winter Ball registration is live on the myMilken resource board and will close on February 3 at 12:30 pm. Additionally, tickets will be sold through Wednesday at lunch in the ampitheatre. The bus registration is an option on the registration page and is free of charge. The Ball costs $30 for each student or guest. If you plan on bringing a non-Milken or de Toledo guest, the guest pass is due on February 4 at 12:30 pm. Be sure to purchase your tickets as soon as possible because this ball will surely be one to remember.