The Clippers: The Rising Star of the Western Conference 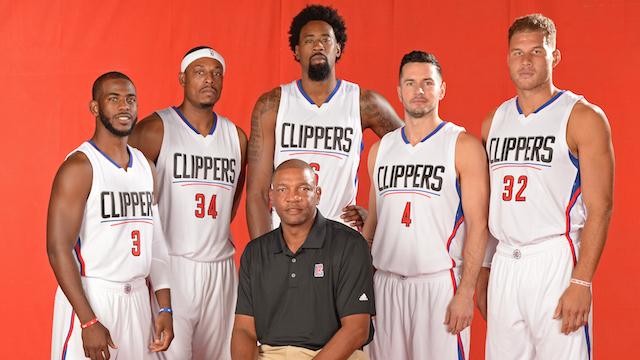 Photo Courtesy of The Hoop Doctors

The Los Angeles Clippers are full of surprises. From beating the San Antonio Spurs in the first round of the NBA playoffs last season, to currently having a 10 game winning streak, the Clippers have caught the attention of both basketball fans and other teams. Even though the Clippers appear 7 times in the top 50 worst records in NBA history, they have climbed up the NBA’s ladder and become one of the best teams in the league. In the past four seasons, the Clippers have either finished 1st or the 2nd in the Pacific Division, and three out of the four seasons made it to the Western Conference Semifinals. And this season, former championship title holders, the Los Angeles Lakers have an 8-31 record, while the Clippers have an impressive 26-13 record.

One of the most impressive aspects of the 10 game winning streak is that they have done this without their star power forward, Blake Griffin. There are many reasons why this winning streak is impressive, one being that they had a very slow start to begin the season. After starting the season 4-0, the Clippers lost their next eleven games, falling well below .500. And to compare to the previous season, at this point, the Clippers had a 19-8 record.

Analysts blame the Clippers rough start on the downfall of star point guard, Chris Paul. According to ESPN, Paul’s points per game this season is lower than any of the past three seasons. Although Chris Paul’s numbers have been lower this season, he still leads the team in assists and provides off the court aspects that statistics cannot keep track of. Michael Rahimian ‘17 provides an idea of Paul’s off the court contribution. He says that, “when [he] watch[es] Paul play, [he is] impressed by Paul’s physicality.Chris Paul is physically smaller than Blake Griffin, but has a bigger heart and is like the leech of the team that sucks blood of the other team”.

With the addition of former Celtics All-Star Paul Pierce and Lakers alum Wesley Johnson, the Clippers season was projected as a successful one by many analysts. Their slow start was unanticipated, yet their recent play has made up for it. The winning streak is unexpected due to the absence of their star, Griffin, who was putting up MVP level numbers before getting injured. With Griffin off the court, Paul Pierce, Wesley Johnson, and Josh Smith have seen a lot more game time.

The Clipper’s recent success provides light at the end of the tunnel for Clippers fans that want to see their team in the Western Conference Finals. Bryce Heitner ‘19 comments on the recent success saying, “My dad has been a Clippers fan for 26 years, and finally they’re getting good, which is something a lot of people in LA have been waiting for”.