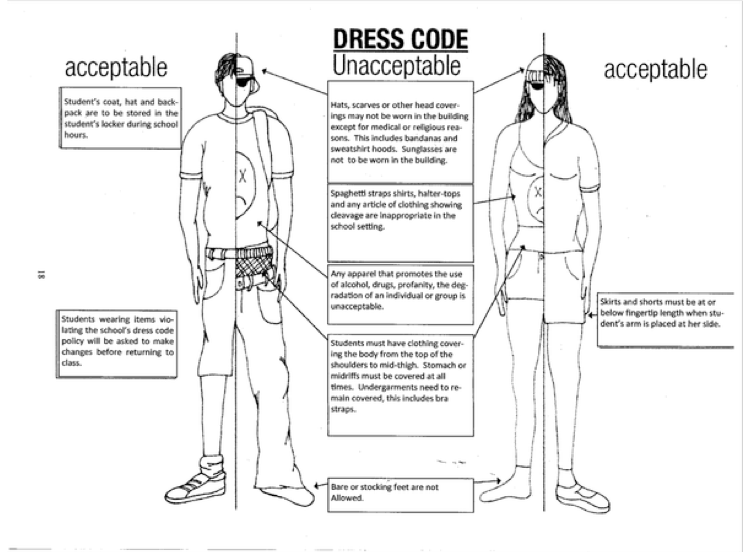 Dress Codes have become a hot topic in American society. Stories of female students being sent home from school for breaking their school’s dress codes have gone viral on the internet. Administrations form dress codes to create a distinguished learning environment, but certain students feel dress codes promote misogyny, and many female students believe their clothing choices should not be worth more than their education. These students have even created signs showing their discontent with their school’s rules.

The Roar asked four diverse voices at Milken about their personal views on the topic.

What purpose do you think dress codes hold?

“The purpose of dress code is to confine students in a box that a school deems “appropriate.” – Jeremy Weinstein ‘17

“Dress codes serve the purpose of creating a ‘professional’, intellectual environment that can uphold the image of a school that doesn’t seem like it’s filled with hormone-driven teenagers.” – Lauren Cohen ‘17

“I think dress is a powerful way to express oneself.  I also think we go overboard sometimes in how much attention we pay to dress.  We have difficulty focusing on the Jewish teaching:  Al tistakel b’kankan eleh mah sheh-yesh bo: “Don’t look at the vessel but what’s found within.” – Rabbi Gordon Bernat-Kunin

“A dress code is intended to be a guideline to help everyone (not just students) dress appropriately for a given environment.  Different situations or places require varying dress codes. For example, one doesn’t wear the same clothing to the movies that one would wear to a party.” – Ms. Stacey Jasper

Do you find dress codes promote a more positive learning environment? If so, why? If not, why not?

“No. Dress codes do not make a better learning environment. Students should be allowed to express themselves through their own personal style, not be told by authority what they can and cannot wear.” – Jeremy Weinstein ‘17

“I feel as though dress code has been used as a mode of further objectifying both the bodies of men and women. By assuming that we are too animalistic and hormonal to focus on intellectual debates and activities when a shoulder or a stretch  of leg is showing, we even further enforce the issue of not being able to separate someone’s mind from their sexualized body; hence, making the body more of a sexual object rather than a natural aspect of our reality.”  – Lauren Cohen ‘17

“I think it is important to give students reasonable freedom of expression and believe that modesty and dignity can be honored while preserving individuality and self-expression.” – Rabbi Gordon Bernat-Kunin

“A general dress code is helpful but hyper focus on rules and regulations create more of a distraction and become a hindrance to the learning environment.” -Ms. Stacey Jasper

Since Milken is a Jewish school, should we have a different dress code than a nonreligious school?

“No, because Milken is pluralistic, and that means being compassionate towards all branches of Judaism and their conceptions of modesty- you should not force anyone to dress in a certain way that is affiliated with a certain branch of Judaism that does not resonate with them.” – Lauren Cohen ‘17

“I think that our dress code reflects our basic concern for tzniut or modesty and cavod or personal dignity. These are Jewish values which I do not think are exclusively Jewish (I would say that within Judaism there are rich debates about the role of autonomy and obligation to traditional observance).” – Rabbi Gordon Bernat-Kunin

“Being at a pluralistic Jewish school, we should be sensitive to ensure everyone feels comfortable, however, there are generally clothes that are appropriate for school regardless of whether it is a Jewish or secular institution.” -Ms. Stacey Jasper

Dress codes at schools throughout America seem to have more limits for female students than male students, does this seem fair in 2015?

“Females should not have more restrictions than males; that is an abomination.”- Jeremy Weinstein ‘17

“Dress code is certainly a way that many schools in America perpetuate objectification of bodies- particularly those of women because of the common idea that girls should cover their bodies up as to not distract boys in classrooms. I, as a young woman, do not appreciate being considered “distracting”- I am not a shiny diamond, nor a lustrous hunk of metal. The issue of ‘distraction’ is not my body. The issue of distraction emanates from the inability of those who may feel aroused by a woman’s leg or shoulder to consciously control their minds to understand that when a female sits in a classroom, what deserves attention is not the curves of her body but rather the complexities of her mind.”  – Lauren Cohen ‘17

“I think the larger culture has tremendous power and “contributes” (not always in positive ways) to how women and men are expected to behave and dress.”- Rabbi Gordon Bernat-Kunin

“Unfortunately, dress codes have a tendency to focus more on women than men. Hopefully as we become more progressive as a society we will stop sexualizing women’s clothing and move the focus away from a woman’s body.” -Ms. Stacey Jasper

What are your thoughts on school dress code? Comment below!