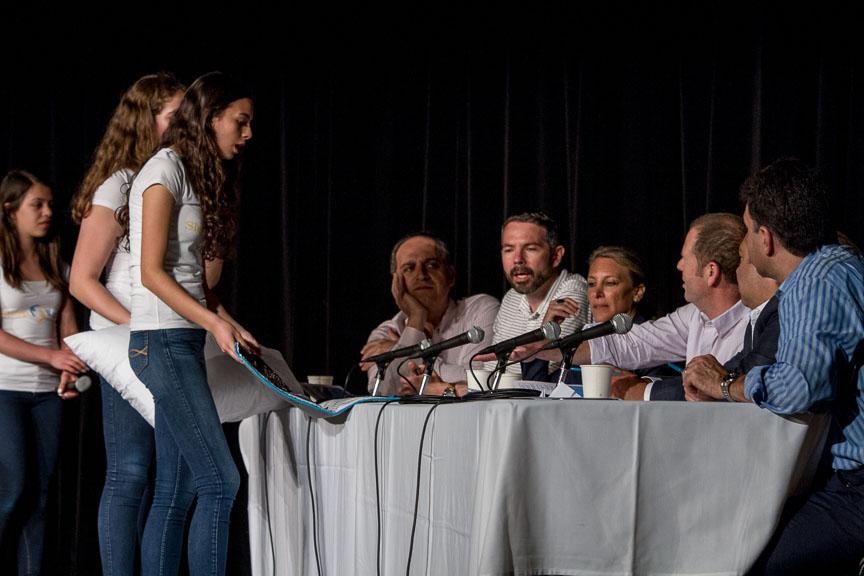 Milken held its first ever Shark Tank event on Thursday, March 26th in the theatre. Five individuals and two teams of innovators had the courage to dive into the tank, and present their inventions to a panel of successful businessmen and businesswomen, otherwise knows as “the shark.”

The presentations began with the entrepreneurs exhibiting their product ideas to the sharks. They explained the need for their product, how it works, and who is included in their target market. The sharks then asked the presenters questions, ranging from the economics of the product to its environmental safety. Once the questions were concluded, the sharks were given the opportunity to invest in the students’ inventions.

First up in the tank were three freshmen, Clarissa Brock ‘18, Clara Pitt ‘18, and Alexandra Sabo ‘18. They demonstrated their vibrating music pillow which would aid students and adults who sleep through their alarm clocks. The pillow not only wakes you up with a gentle vibration, but also plays your favorite song. Next was Michael Moadeb ‘16, with his disposable gum size iphone battery charger. The demand for the product seems like it would be huge, as teens and adults often all need to recharge their batteries on the go. The convenience is the size of the product, as it is a large improvement over bulky portable chargers. Though impressed,  a few sharks remained skeptical and questioned the environmental safety of the disposable batteries and the chemicals that may be exposed.

Next was Brandon Soufer ‘17, who showed the sharks his proposed way to revolutionize the shoe industry. His idea for interchangeable soles of shoes really got the sharks interested. Soufer demonstrated how taking multiple pairs of shoes on a vacation takes up too much space, and with interchangeable shoe soles, you can easily transition from an athletic look to a dressy one. Elle Melmed ‘16 presented her soup ladle that filters out everything but the broth for those who dislike the more dense aspects of the soup. This is a great idea for a large market of kids who won’t eat soup unless it’s just the broth.

Eli Esagoff ‘17 showed the sharks his family business, which involves the manufacturing and selling of broaches. These broaches in particular have magnets on the back that hold up a pocket with a counterpart magnet on the inside of the shirt. The product can really help women who lack pockets to compartmentalize.  Benji Stawski ‘16 showed off his Uber-like tutor service. His goal is to create an app where you can call a tutor on demand. Ilan Goldberg ‘15 and Noah Hendlish ‘15 cooked up some Kosher for Passover Tortillas for the sharks. The sharks loved it, but they were worried about competitors like Manischewitz.

The event was a monumental step in accomplishing Milken’s goal of getting students to think outside the box, and pursue entrepreneurship. The entrepreneurs were able to make connections with the accomplished business-men and businesswomen, and some even received internships. The Shark Tank format brought a lot of fans of the show to the event, and Milken will definitely bring this event back in the years to come. Do you have the next million dollar product?