Review: Into the Woods 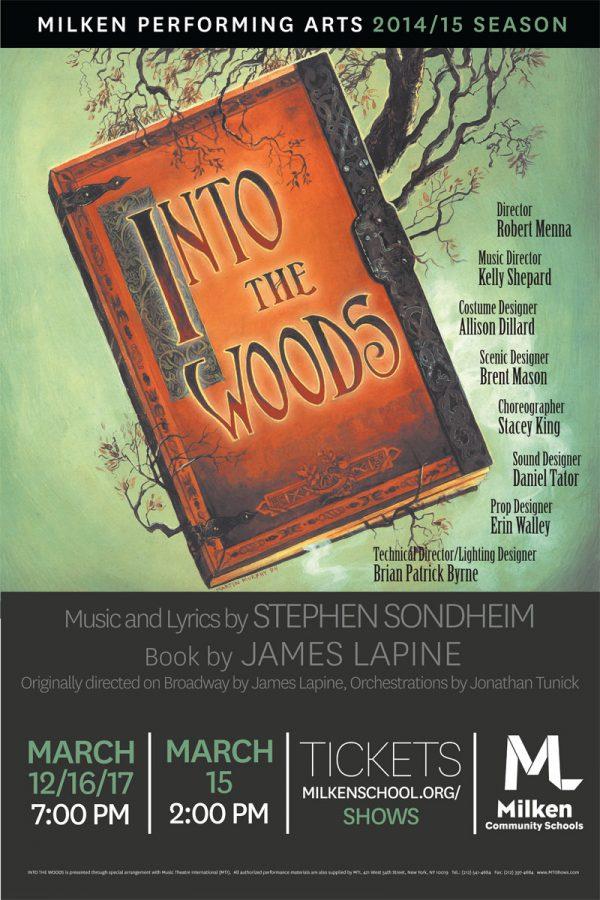 After having seen three Milken musical productions (Beauty in the Beast in 2010, Spamalot in 2013, and Grease in 2014), Into the Woods, without a doubt, stood out to me the most. The Milken Performing Arts department did an excellent job in their rendition of Into the Woods, a fantasy musical that intertwines the lives of characters from the most popular fairy tales and fables, such as “Cinderella,” “Little Red Riding Hood,” and “Jack and The Beanstalk.”

Despite its lengthiness (two and a half hours to be exact), Milken’s production of Into the Woods was filled with relentless energy, thanks to its impeccable set design, powerhouse acting, charming songs, and ambitious storytelling. In addition to Into the Woods’s creative spin on classic fairy tales, the story focuses on a childless baker and his wife (played by Noam Fields-Meyer ‘16 and Jenna Fink ‘16) who embark on a quest to begin a family, but not before they encounter a witch (Tiffany Maddahi ‘15), as well as other storybook characters.

Some of the most memorable parts of the show were, of course, the musical pieces: the two princes (Jonah Cohen ‘17 and Aaron Hendizadeh ‘15) grieved about their woes over their love interests in the iconic “Agony.” Daniel Yadegar ‘18 gave a breathtaking solo performance as Jack when he delivered “Giants in the Sky.” Maddahi, who already stole the show as the Witch, brought the house down with her two lead performances “Witch’s Lament” and “Last Midnight.” Lastly, the ensemble’s opening and closing numbers in both acts deserved the highest merit.

But besides the musical numbers, what impressed me most about Into the Woods was how the cast was able to highlight the variety of issues tackled within the characters’ perplexing situations, such as beauty, power, mortality, and love. Though Into the Woods’s morose tone and multiple subplots may have been off-putting for some, the cast were remarkable at emulating and capturing the flaws and strengths of the characters. Although I have yet to see the film version of Into the Woods, which was released in theaters last year to positive reviews and commercial success, I applaud the commendable work of Milken’s talented cast and crew. Yasher koach!