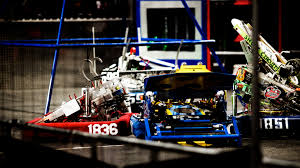 Turns out the Robotics Team’s robot can do more than just throw Frisbees.

“I knew something was wrong when I discovered five grape tomatoes missing from my urban garden,” Elizabeth Katter, Jewish Studies teacher, said.

Most teachers assumed that the acts were committed by a freshman, because as Jerry Martin, English teacher, said, “Who else would it be, right?” However, some faculty members had leads on the true identity of the perpetrator.

“Someone used the iPad to order 700 necklaces from our Milken Mart jewelry collection to the school, but when I used my laser system to scan the screen, I couldn’t find any DNA,” Fern Dubow, Head Milken Mart Mom, said.

Reggie Rios and his maintenance team followed a trail of Pesek Zman chocolate wrappers from the Tiferet Office to the Staff Lounge, where the robot was found covered in shake-and-pour pancake mix while writing “If you’re reading this, it’s too late” on the wall in black Sharpie. The robot was detained and is spending its time with Austin Shalit until the administration decides on a solution to this potentially ongoing problem.

Roger Kassebaum, MAST Director, apologized for the incident but declined to comment further. An anonymous member of the Milken Knights admitted to the Roar: “Ever since we received an expanded robotics room and a ton of extra funding – I mean, support from the school, we’ve made a lot of progress on our robot. It’s possible that our technological advances actually reached a point where the robot could function independently.”

The front office reportedly called Skyler Gisondo ’14 on Thursday morning and asked him how to deal with inanimate objects that have come to life, to which he responded that he is just an actor and Night of the Museum 3 is entirely fictional.

UPDATE: David Kates, Librarian, has agreed to watch the robot every night, because due to the fact that he is a dragon, he stays awake anyway.