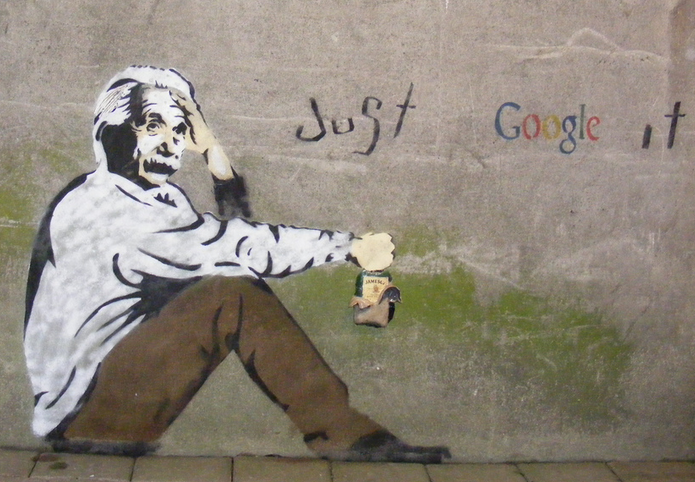 Part of The Roar’s #CyberNation: The Next Generation Series

Just the other day, a student in my Anatomy and Physiology class rose her hand, waiting for the teacher to answer her question. We had an exam the next class, so everyone was nervous about getting through all of the new material that day. This nervousness led a boy in my class to shout out, “Don’t waste class time, just Google it!” At that point, the student dropped her hand. That is when it occurred to me that we students have access to virtually anything.

People often look up to others when they possess greater knowledge than their own. What possesses more knowledge than the internet? This generation lives in a world where the wifi signal coincides with a heartbeat. The “higher power” is no longer associated with our parents, teachers, or religious figures, but rather with the internet. It holds information about math, science, literature, art, music — you name it. Students rarely research topics by means of the library or literary research. Now, a few simple taps on your keyboard and one click can open up a world of seemingly endless information.

According to a 2014 report from Nielson, an online platform that specializes in consumerism, Americans spend 11 hours a day with electronic media. The Bureau of Labor Statistics reports that high school students spend 6.6 hours a day on average in school. The reality is that the internet is occupying more of our time than school.

The internet empowers us, feeds us information, and is almost always there. People are spending a lot of time on the internet, and the internet has plenty of things to teach us. From Ted Talks to personal blogs to YouTube, we are immersed in a culture of information and learning. All forms of authority — schools, politicians, teachers, adults—have come together and implemented their knowledge into the internet. The result is a platform that provides access to almost any form of knowledge. Better yet, the result is a new form of authority.

The amount of time spent on the internet per day undoubtedly means that we are learning and consuming information from online sources. But how accurate is the information absorbed? At one point in each school year, at least one of my peers has asked the teacher whether or not Wikipedia is a valid source. It is easily accessible, abundant with information, and ideal for research. Except people tend to forget about one thing — anyone can edit a page of information on Wikipedia. If I wanted to update the Wikipedia page on World War II and claim that it began in 1976, I could easily do so, even though that information is completely false.

What we are being fed by this new form of authority is sometimes a plethora of fabrications, but often a plethora of good information. The possibilities for technological advancements are infinite, and overtime cyberspace may truly obtain full control.