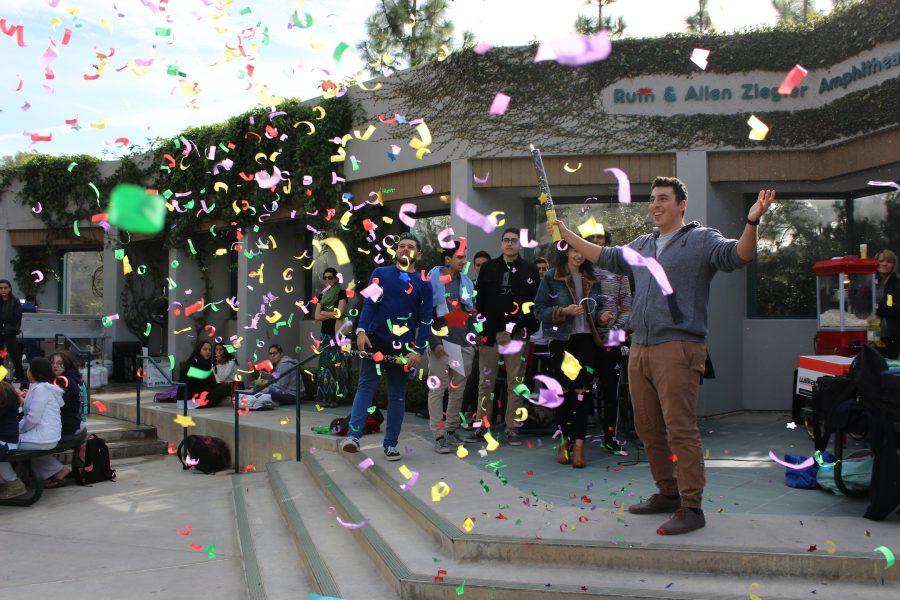 Monday, December 15th marked the opening of this year’s Winter Color Games. Spirits were high as everyone geared up in their grade’s color. In the link below is a recap of the week.

The opening event was a new and unusual competition involving folded t-shirts that were soaked in water then frozen solid. Competitors had to unravel the shirts and put them on in order to win. Joshua Shemian ’15 brought the senior class to a narrow victory.

On Tuesday, Samantha Zucker ’15 and Avi Sholkoff ’15 dominated in the jeopardy competition by answering the first five questions, taking another win home for the seniors.

The gym was the setting for Wednesday’s traditional dodgeball game. Seniors faced off against the freshmen and the juniors were matched against sophomores. Seniors and sophomores advanced and closely competed. In the heated one-on-one, it came down to Avia Cohen ‘15  versus Saba Amid ’17. Cohen was the last one standing, making the senior class undefeated.

On Thursday, three representatives from each grade participated in the musical chairs competition. The final round pitted the juniors against the freshmen, with the junior class taking the title when Oliver Pourbaba ‘16 stole the last chair from Michael Veiseh (’18).

Student government ended off the Hanukkah season of Color Games with the classic sufganiyot (jelly filled donut) contest. The competition required students to finish three donuts without using their hands. Aviel Dardashti ‘18 devoured his donuts, winning the challenge for the freshmen class.

When the points were tallied in the end, sophomores ended up in last place with 125 points, freshmen took third place with 150 points, juniors were runners up with 250 points, and seniors continued their legacy of victory with 275 points.