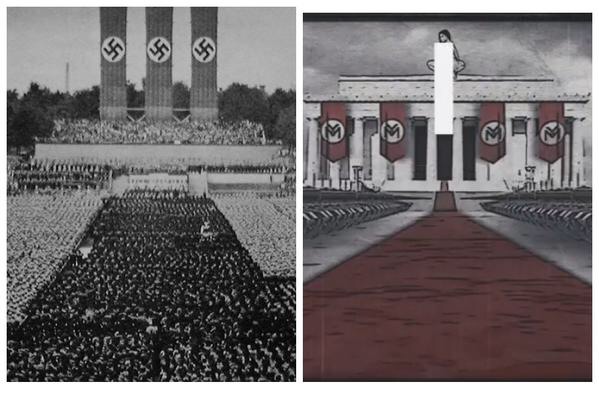 Arm bands, gas masks, and tanks: is there Neo-Nazi propaganda in Nicki Minaj’s new lyric video? On Saturday, November 8, Minaj released the lyric video for her new single, “Only,” which depicts some controversial imagery. Many different aspects of the video resemble Nazi iconography, such as Young Money swastikas, the black, red and white color scheme, armbands, and even some architectural elements.

November 9 marked the 76th anniversary of Kristallnacht, when the Nazis attacked many cities and villages all across Germany and Austria. Isn’t it kind of ironic that the song came out right around this anniversary? Kristallnacht was the breaking point when things got really bad in Germany, and led to Hitler’s other plans for the Jews. This raises many questions: Did Minaj know any of this? Who approved the video’s imagery? Some featured artists in the song are Chris Brown, Lil Wayne, and Drake, who are all signed under the same record label “Young Money”, as is Nicki Minaj. Also, isn’t Drake half Jewish? How is he not taking any offense to the fact that this video looks like neo-Nazi propaganda?

In a USA Today interview, video director Jeff Osborne commented, “First, I’m not apologizing for my work, nor will I dodge the immediate question. The flags, armbands, and gas masks (and perhaps my use of symmetry?) are all representative of Nazism.”

I think that this video was made as a “shock factor” type of piece. Minaj reported that her cartoonist was trying to make references to Sin City and Metalocalypse, but there is no correlation between the lyrics and the imagery. The song is about how Nicki Minaj won’t sleep with Drake and Lil Wayne, and the lyric video is portraying Minaj as a dictator.

Osborne also added in his interview with USA Today, “I think it’s actually important to remind younger generations of atrocities that occurred in the past as a way to prevent them from happening in the future. And the most effective way of connecting with people today is through social media and pop culture. So if my work is misinterpreted because it’s not a sappy tearjerker, sorry I’m not sorry.”

Minaj is not the first person to delve into this familiar topic of controversy. In 2005, England’s Prince Harry went to a costume party dressed up as a Nazi, later saying he “didn’t pay close attention” to his costume. In Pink Floyd’s video of Another Brick in The Wall Part 2, it shows hundreds of people on boxcars passing by a little boy. Both of these instances are extremely insensitive, even if they did apologize for it.

As a 17-year-old woman about to go out into the world and off to college, I am not sure I feel too confident about what is going on, especially with all the tension in the Middle East at the moment. My family was personally affected by the Holocaust, and it makes me feel sick to see that an artist I enjoy listening to uses Nazi propaganda in her work and is so inconsiderate of a people who lost six million of its kind. This is not the way that people should be teaching about the Holocaust or what Hitler did. This is the type of subject that should be examined in a controlled environment without explicit lyrics popping out from every which way.

These prominent figures should not be so easily forgiven for doing these unspeakable acts. These instances are examples of what holds the world back from leaving anti-semitism behind. I feel uncomfortable when I see or hear someone whose music I listen to propagating Nazism. It makes me feel like I should not be listening to their music anymore, and definitely not supporting them, regardless of their apologies.

Tweets that Minaj tweeted as a response to outraged fans: