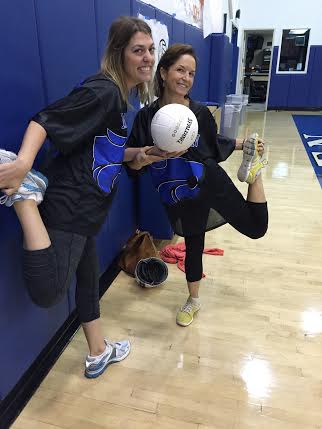 Avid students filled the bleachers to the brim and lined up around the court to watch the game. Mr. Robert Painter was in charge of the microphone and took the liberty of designating himself as the official joke teller. Some other highlights include Iverson’s serve, Steele’s kills, Moran’s tips, and Morgan’s Evel Kneivel helmet (which is actually Ms. Amy Frangipane’s son’s helmet).

During the first match, the faculty started in the lead, however the students progressively stepped up their game, ultimately winning 25-17. Similarly, the second match ended with a close score of 25-18.

“I was so impressed with the turnout for this event. Games are so much more fun with a crowd – the energy, the cheers, Mr. Painter’s commentary…It made our sorry attempts at passing more than worth it,” Khorsandi said.

The massive turnout has inspired similar future events; Milken students can expect an equally great and entertaining show in the near future when the faculty takes on the basketball team.

“I am so thankful for our faculty members who came out to play and to our students who came out to watch. Never before have I worked with a group possessing more raw (very raw) talent than this faculty team,” Steele said. “They made the game fun and competitive and, really, that’s what it was all about. They were brave in the face of a very talented varsity girls team, and lost with dignity and grace and, more importantly, no broken bones.”

Congratulations Varsity on the win, and thank you Milken students for supporting the teams! Go Wildcats!