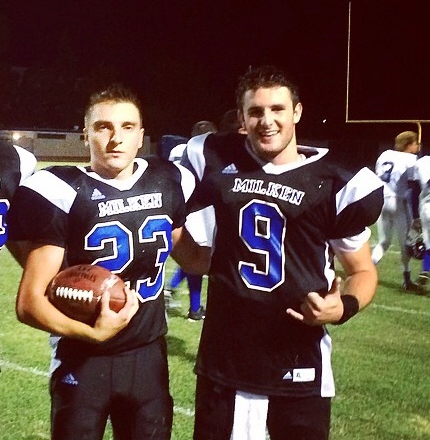 Fleshner has been playing football for three years at Milken. His positions include running back, cornerback, safety, as well as kick and punt returner. Over the summer Fleshner went to training camp to train for the upcoming season. One of Fleshner’s favorite team rituals is Pasta Wednesdays, where the whole team eats pasta for dinner the night before a big game.

“When I heard I was being named captain, I felt a lot of pride and responsibility. I love being captain,” Fleshner said.

Girocco has also been playing football for three years at Milken. He is a linebacker, tailback and quarterback.  In June, Girocco went to general football training and later attended a four-day quarterback training camp in Louisiana. Before each game, Girocco enjoys the team’s ritualistic stretching and chants.

“Being named captain was a real wakeup call because I wasn’t just someone playing a position, I was becoming a leader,” Girocco said.

“I was really happy when I found out that I was team captain. I am definitely ready for the responsibility,” Grant said.

Zively has been playing football for four years at Milken. He is part of the offensive and defensive lines. One of his favorite rituals is also the chant before each game and Pasta Wednesdays.

“I was really surprised to be named captain, but I feel that I fit the role well,” Zivley said.

These four captains led their team into a strong homecoming victory this past week. The team ended with a six in three record and will be in the playoffs season this year. Go Wildcats!