The Birkenstock Walk: An Ongoing Debate on Biblical Footwear 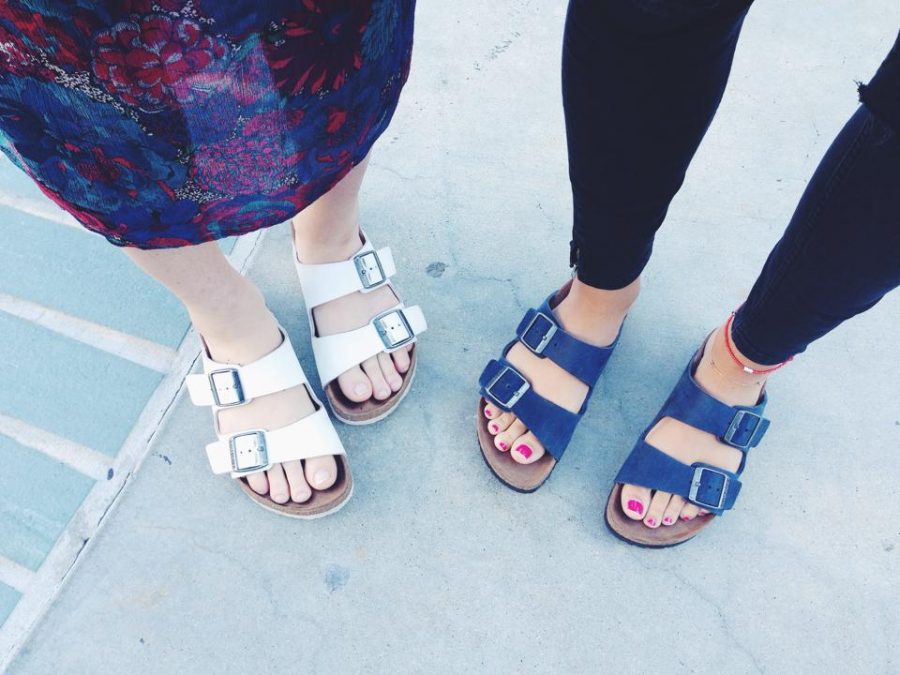 A few years ago, my mom purchased a pair of brown leather Birkenstocks decorated with gold studs. Not only was I utterly confused, but it also seemed as though it was my obligation to make fun of her. She is not someone who cares about fashion, bur rather seeks clothing items that are 100% comfortable. And these sandals, resembling those of a hip and funky Moses who enjoys dancing on weekends, fall into that range.

Little did I know, my mom was ahead of all of us.

The year was 1964 when Karl Birkenstock crafted the original prototype of Birkenstock in Germany, a company specializing in shoes that conform to wearers’ feet due to soles made of cork. Later, the style traveled to the United States, becoming a popular and necessary addition to the wardrobe of “flower children,” an American liberalist group.

Birkenstocks remained popular through the 90’s, worn by hippies, summer camp goers, moms, and dads in search of shoes to “chill out” in… and now, models, fashion bloggers, and celebrities?

It seemed as though Birkenstocks used to be a wardrobe choice that was more than frowned upon. If you were to slide into those bad boys, you had the potential of being called offensive names, such as weirdo, loser, creeper, and, well, we won’t go there.

The styles are endless: there is the clog, the thong, the single-buckle, and the double-buckle, which seems to be the most purchased style in 2013-2014. So, what is it that influences everyone to buy Birks?

Birkenstock sandals have formed into not only a shoe company, but a complete fashion trend — a reoccurring fashion trend to be exact. Many manufacturers are attempting to “copy” the shoe, such as Zara, Sam Edelman, and Jeffrey Campbell. However, Birkenstocks truly erupted in the designer world when Céline sent their fur lined Birkenstock look-alikes down the runway in their Spring 2013 show. Though the look was abstract, viewers loved it.

Most people are attracted to the fact that Birkenstocks are extremely comfortable, shaping to the formation of buyers’ feet, creating a relationship between sandal and person. Yes, a relationship. Though that may sound extreme, Birkenstocks know you. The way your foot is shaped. The amount of walking you do on a given day. They’re with you, they support you, they love you… don’t you ever forget it!

Birkenstocks are also easy to wear. Requiring no laces, zippers, or velcro (gotta love some good velcro, right?), you glide right into them and are ready to go, ready to go do anything. Save polar bears from becoming extinct? Create a cure for all cancers? Conquer the world? No question, you’ve got this.

Initially, it is normal to think that Birkenstocks will make you look like Bigfoot, causing your feet to seem incredibly wide and monstrous. But thats just all part of the process, people! They have the ability to complement many outfits, portraying an effortless yet cultured look. Wearing Birkenstocks makes you appear like a global citizen, someone who has seen the world and only needs a pair of shape-shifting sandals to get (happily) by. Throw them on with ripped jeans, shorts and a tee, a suit, or even a ball gown. They will always make your outfit look cool.

So, this is why I purchased black leather Birks at the beginning of the summer. I’m not going to lie, I was scared and hesitant at first to wear them. They were tremendously large and uncomfortable. But I just went with it. And with time, I broke them in, and they are now one of my favorite pairs of shoes.

Moral of the story? Give Birkenstocks a chance. And overalls, those are great too.