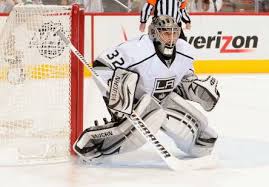 When the Los Angeles Kings went down in the first series 3-0 to their rival, the San Jose Sharks, things seemed bleak for the Kings. No one knew what was going on and fans wanted answers. People began to blame the Kings’ coaching, effort level, and even their star goalie, Jonathan Quick. The same goalie who led the group to their first title in 2012. The same goalie who started for the American team in the 2014 Winter Olympics. The same goalie that won the William M. Jennings Trophy for fewest goals allowed during the regular season. Quick has been one of the best goalies in hockey. What caused such loyal fans to turn on him?

Quick was simply playing bad hockey. However, it wasn’t only his fault. A lack of effort and poor defense helped dig the Kings a nice hole. In the first three games, Quick’s numbers dropped dramatically from what they usually are. In the regular season, he was averaging just over 2 goals allowed per game with a 91.5 save percentage. In the Kings first three games against the Sharks, Quick averaged over 5 goals allowed per game with only a 84.8 save percentage. While these first three games were disappointing both on the stat sheet and on the scoreboard, things took a turn for the better for both Kings fans and Quick immediately after.

Since the Kings took the ice at the beginning of game four of the first round, it has been a new and fresh start for the team and Quick. Since then, Quick has averaged 1.3 goals per game with a save percentage of 96.2. To put this in perspective, during Quick’s ridiculous tear during the 2012 playoffs, he gave up 1.41 goals per game and only had a 94.6 save percentage. In the past six games Quick has been lights out and by far the best goalie in the league. The real question is, can he keep it up?

As the Kings look to get to the next round, they also look to Quick for leadership. In a sport where nothing is more important than a hot goalie in the playoffs, the Kings have just the right man. The 28 year old, seven year veteran, is playing the best hockey of his career and if he can maintain his impressive skills this season, the Kings may go on to win their second title in the past three years.