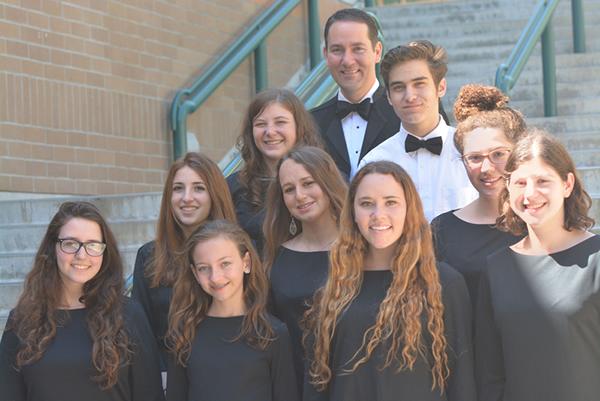 This Sunday, March 30th, Kelly Shepard will be conducting 10 Milken students along with 280 other Jewish teenagers in a concert in New York’s Carnegie Hall .  Kelly conducts the Los Angeles chapter of HaZamir, the international Jewish Teen Choir.  The Milken students are all members of a 20-person Los Angeles chapter, which is one of the many chapters in the U.S., Canada and Israel.  The students will perform a wide variety of Jewish and Israeli choral music to a sold out audience.  Kelly will be conducting “Hallelu – Psalm 113”  by Robbie Solomon and Joel Sussman, and arranged by Eleanor Epstein.

I asked Noam Fields-Meyer how it feels to be playing in one of the most famous theatres in the world.  He said, “There’s an old story my dad once told me. A man is wandering through New York and asks a stranger, ‘How do you get to Carnegie Hall?’ The stranger answers, ‘Practice, practice, practice.’ I guess this is our way of showing that all of the learning, practicing, and performing that we’ve all done throughout our lives has payed off.”

This will be the finale piece in the concert:

– 118) for his pop-rock band, Safam. Since Hallel is recited for all eight days of Hanukkah

Rosh Hodesh, there are many opportunities for this somewhat “unorthodox” service to actually

be performed with full instrumental accompaniment, even in more conservative settings.

Indeed, there are parts of the service that bear a decidedly “traditional” flavor; the opening and

closing sections have a reverent sound that is reminiscent of synagogue chant (nusach), and the

conclusion of Psalm 118 sounds a lot like an Eastern-European klezmer celebration. For this

setting of Psalm 113, though, Solomon chose a jazzy waltz that is far removed from typical

synagogue sounds throughout most of the composition. The last verses, though, are set like a

traditional cantorial recitative, in the tradition of the golden age of hazzanut (cantorial chant).

It’s almost as if Solomon is offering a “tip of the hat” – or kippah! – to this bygone era, saying