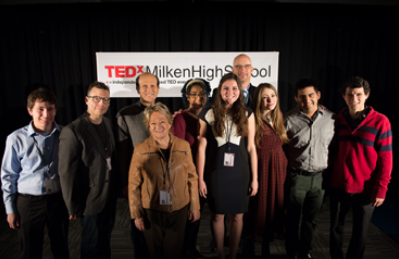 On Sunday, February 9th, Milken held its first TEDx conference in the Beit Midrash.  TEDx is a privately organized TED event with the deep, engaging discussions people have come to expect from TED in the spirit of “Ideas worth spreading.”  Each TEDx event has a theme, and for the first Milken event, created by Daniella Wenger ‘14, the talk is based on “The New Order.”

“The New Order is a concept, fad, and/or trend suggesting that our world is currently undergoing monumental and significant transformations,” Mr. Gary Weisserman, head of school and a huge TED advocate, explained.  “Individuals who acknowledge the New Order consider each day as a blank canvas; they realize that now is the time to challenge one’s values and question one’s moral compass.”

The event began with a warm welcome from Weisserman. The headmaster spoke about how, throughout history, we have made so many scientific advancements and are still making progress today. He said, “In 2012 there were 1.6 million [scientific] papers posted. How can we possibly keep up? The truth is, it’s not possible…This is a watershed event for us. It represents a turning point at the school. It represents curiosity, ideas, and imagination, and that is power.”

Daniella Wenger came onto the stage and explained that she developed the theme, “The New Order,” during conversations with Dr. Roger Fuller.

She introduced this year’s keynote speaker, Michael Milken, a leading philanthropist, financier, and co-founder of the Milken Family Foundation. Milken has played a huge role in the success of the Milken Schools and is a big supporter of the Tiferet program. His talk, “The Promise of the 21st Century,” emphasized the potential that individuals have to make an impact and change the world. Milken gave a lot of credit to the extension of life expectancy and biosciences that have found cures to huge world crisis. He mentioned how AIDS once meant imminent death, but with modern medicine, people living with AIDS can still live a full life.

Following Milken’s presentation, five student speakers gave their talks: “Fashion At Its Most Intimate Level,” by Madison Levine ‘14, “Unintelligent Understanding of Intelligence,” by Noah Wallace ‘14, “The Engineering of Art,” by Nathan Hakkakzadeh ‘14, “Education, Capitalism, and the Digital Divide,” by Max Cherman ‘16, and “Standing Between Bubbles,” by Robyn Rose Valentine ‘15.  Alumnus Dominic Kalms ‘06 spoke on “Your Butterfly Effect: Actions in an Interconnected World,” and Dr. Russell Steinberg, music instructor, spoke on “Music and the End of Time.”  Speakers engaged audience members with PowerPoint presentations and thought-provoking questions, which were discussed during the lunch break.

In a private interview after the event, Milken built on his talk and emphasized the importance of such events. “It really isn’t armies that change the world, but really a few people that care about a particular thing,” he said.