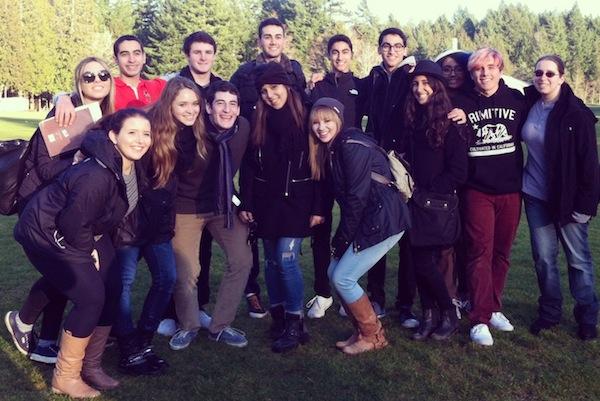 Early Sunday morning, January 19, 16 Milken juniors embarked on a journey through the Pacific Northwest looking at potential universities to attend. Students visited a variety of schools, ranging from large public schools to liberal private schools with under 2,000 undergraduates.

The students were accompanied by college counselors Dr. Marivel Oropeza and Ms. Shelly Kierman, as well as Kim Renfrew, the College Excursions trip coordinator. Before stepping foot onto any campus, Renfrew read to the students from the “Fiske’s Guide to Colleges” to get a sense of student life, academics and other information about each school.

“It was really nice to be in the cold and see the difference between LA weather and Northern weather and how it would affect me in college. Seattle is a beautiful and lively city, and I think it would be an awesome city to live in for four years,” Lizzy Heller ‘15 expressed.

Monday and Tuesday night were spent in Portland, Oregon, where the students saw Willamette University, University of Oregon, Lewis & Clark College, Portland State University and Reed College. The students experienced a range of rural, suburban, and urban environments during their stay in Oregon.

Robyn Valentine ‘15 shared, “Portland is a really cool place where you feel like you can do anything and can find people who like to do fun and quirky things. And how can you not love a place that has food on every corner?”

On Wednesday, the students arrived in Sacramento, where they stayed for the night. The following day, they went to see UC Davis, UC Berkeley and Stanford, and then drove to San Francisco.

“I loved San Francisco. It is such an interesting city with such lively culture and action. I enjoyed the cool air and the schools that are around the city. I could definitely see me going to a school in the area,” Bella Emsallem ‘15 shared.

The students spent their last day at University of San Francisco and UC Santa Cruz. After their final visit, the students departed from San Jose International for LAX.

Gabriel Yashar ‘15 described his experience on the trip: “I really enjoyed the entire trip. I thought it was really important to see different types of schools that are out there, and it helped that they were close to home because they may be possible schools that I end up applying to. I think it is a great idea for other students in the future to go on.”

Throughout this trip the students were able to gather information so they could start their college research. They were able to distinguish between what they liked and disliked at these schools, which are now things they can look for when making their decisions.